2 Or 3 Things I Know About Her 
As Amy Taubin writes in the liner notes to this Criterion release, Jean-Luc Godard’s “2 or 3 Things I Know About Her” (1967) is too rich, too dense, too monumental to do justice to in a short review. So I’ll just talk about espresso instead.

In the film’s most celebrated shot, cinematographer Raoul Coutard pushes in closer and closer on a cup of espresso, the milk swirling and bubbling as Godard whispers on the soundtrack:

Since a wide gulf separates my subjective certainty of myself from the objective truth others have of me,
Since I constantly end up guilty even though I feel innocent,
Since every event changes my daily life,
Since I always fail to communicate, to understand to love and be loved,
And every failure deepens my solitude, since… (long pause) … since…
Since I cannot escape the subjectivity crushing me nor the subjectivity expelling me, Since I cannot rise to a state of being nor collapse into nothingness,
I have to listen, more than ever I have to look around me,
At the world,
My fellow creature,
My brother.

For a director accused of being too intellectual, too obtuse, annoyingly obsessed with word games, you can’t ask for anything more direct than this confession of insecurity, inadequacy (“I always fail to communicate”) and profound loneliness. As we look closer and closer at the white swirls, this literal and figurative Milky Way in a cup, Godard opens up, putting himself in front of the camera as much as possible without actually appearing on screen.

As always with Godard, there are many ways to read the scene. If you want to follow an autobiographical approach, like critic Richard Brody does, Godard is addressing his feelings about the film’s star Marina Vlady. Godard began shooting “2 or 3 Things” just a week after wrapping photography on “Made in USA” (1966), a farewell to ex-wife Anna Karina. He not only plunged right into his next film, but also into his next relationship. Shortly before filming began, he proposed to Vlady. Just as filming began, she turned him down. Their on-set relationship was not a good one, but the tension between them was a productive one, at least in terms of the final product.

But maybe it’s a mistake to interpret this scene in such a limited way. Godard may also be directly conveying his raison d’être as a filmmaker. If he fails to communicate, then he must listen and observe even more attentively. Perhaps this explains his reliance on the dynamic between documentary and fiction that informs both “2 or 3 Things” and many of his subsequent films: “One Plus One” (1968) for example; “Passion” (1982) as one of many others, on up through “Notre Musique” (2004). Generations of filmgoers trained to believe a film exists only to convey a narrative may be baffled when Godard stops to intently study seemingly insignificant details, when he prolongs “boring” moments at the expense of traditionally dramatic ones, but maybe Godard trusts the camera's ability to document more than his ability to interpret. Or maybe not. I'm still trying to figure it out.

Another passage from Godard is illuminating, one that is filmed over the tightest shot of a bubble in the coffee cup:

What a corner to be painted into. Godard is quoting Wittgenstein(“the limits of my language are my world’s limits”) who explained language as a method of categorizing the world around us. And this categorization both enables and limits our understanding of the objects around us. And our pictures too, which we process through the filter of language (in other words, we put pictures into words). I’m oversimplifying when I suggest that this is one of the primary concerns that Godard struggles with in most of his work (can we ever just see without interpreting the act?), but… I don’t have better words to describe it. I’m limited that way.

You probably want a description of the story, which was inspired by a series of articles about housewives turning to prostitution to maintain their lives in the new housing developments on the outskirts of Paris. The film follows housewife Juliette Janson (Vlady) through 24 hours in her life as mother, wife and prostitute. But enough about the plot.

“2 or 3 Things” might sound like a character study, but it isn't. Would you expect that from Godard? It’s a film about a changing Paris (the third “her” of the title along with Janson and Vlady), one that, like in “Une Femme Mariée” (1964), is an ideological construct built on a flimsy, shifting foundation created by advertisement and the consumer impulse. Godard is not exactly optimistic about the growing influence of consumerism in Paris, but he also takes time to appreciate the beauty of this changing world, to celebrate sleek, shiny new Paris instead of merely grumping about the displacement of the old Paris.

Godard’s words on the soundtrack again: “You might say that living in modern society is virtually like living in a giant comic strip.” Not exactly a comforting thought, but it sure makes for some beautiful footage. A scene at a garage pop(art)s with color, particularly bright red, and is as alive and vibrant as the techno-Paris of Jacques Tati’s “Playtime” (1967.) As a city symphony film and as a document of its times, “2 or 3 Things” is a marvel that equals anything in Godard’s 1960s output. 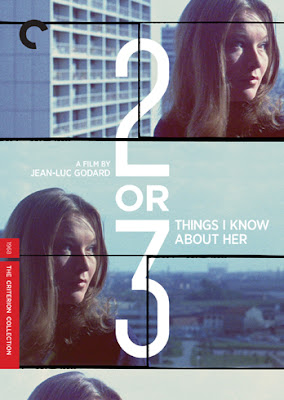 Extras:
The commentary track by Adrian Martin is about as good as it gets. Martin doesn’t function as a play-by-play announcer walking you through what’s happening on screen, but uses his considerable multi-disciplinary knowledge to provide an in-depth analysis of the film and the philosophical, political and literary context needed to dig deeper into it. Martin has been one of my favorite critics for some time, and I hope we’ll get more commentary tracks from him.

Marina Vlady is interviewed on set in an excerpt from the French TV program “Cinéma” (7 min.) that originally aired on Oct 26, 1966. In an episode of the program “Zoom” (13 min.), Godard debates with government official Jean St. Geours about the housewife-prostitute issue. It’s pretty damned fascinating.

A “Concordance” (9 min.) traces the relevant references in the film, and is narrated by Dan Stewart.

The disc also includes an interview (15 min.) with actor/writer/filmmaker Antoine Bourseiller, a friend of Godard’s in the '60s who discusses their “warlike” relationship.

The insert booklet features an essay by Amy Taubin, and reprints an anonymous letter from a housewife turned prostitute that provided one of the inspirations for “2 or 3 Things.” It was originally published in the May 4, 1966 issue of “Nouvel observateur.”

Final Thoughts:
Now that Criterion has released “Made in USA” and “2 or 3 Things I Know about Her,” all of Godard’s feature films from “Breathless” through “Weekend” are now available on Region 1 DVDs. I wonder if this is the last Godard title we’ll see from Criterion. Their prior release of “Tout va Bien” (1972) is somewhat encouraging, but it’s hard to find a likely candidate for future Criterion treatment. With New Yorker, the other major producer of Godard DVDs, now defunct, who will step up to the plate? Would Criterion really take on neglected films like “Germany Year 90 Nine Zero” (1990) or “King Lear” (1987) or perhaps tackle a massive project like “Histoire(s) du cinéma?” Here’s hoping they will.