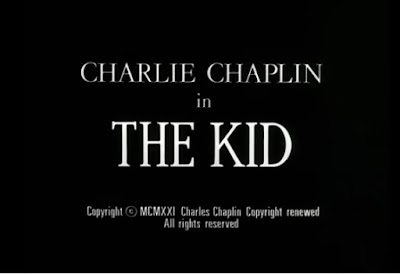 
Slapstick, pathos, heaven and hell, the forgotten charms of child boxing - “The Kid” (1921) really has it all.

Charlie Chaplin was already famous, perhaps the most famous man in America and much of the rest of the world, by the time “The Kid” played to sold-out theaters, but the master's now-legendary heartstring-tugger was the clearest indication to date that there might well be no limit to The Tramp's appeal. Chaplin had experienced something close to overnight success after he moved from London to Hollywood to be one of Mack Sennett's players at Keystone Studios. Chaplin first appeared on screen as the character who would come to be known as The Tramp in February 1914. By 1915 he was already a national obsession and by 1917, Chaplin had parlayed his initial $150/week contract into a $1 million annual salary. Not adjusted for inflation today. A cool million (and more) in 1917.

Chaplin exploited his immense fame and fortune to take control of his career to an unprecedented degree and soon had built his own studio where he would function as actor, writer, director, producer, composer and virtual lord and master over his own kingdom for much of the next half century. Chaplin had mastered the assembly-line craft of the one and two-reeler, the short films that were still the coin of the realm for silent comedians in the late teens. But as the twenties dawned, the ambitious artist and entrepreneur still wanted to expand his horizons, and was confident enough (some might say egotistical enough) to ignore the naysayers who told him that a comedy, and certainly not a slapstick comedy, would never hold an audience's attention at feature-length.

Chaplin had no intention of just kicking people in the rump for an hour or so, of course. The Tramp had started life as a rabble-rouser and, let's be honest, a bit of a prick, but Chaplin had gradually added layers of sympathy to his rough-and-tumble rascal. With “The Kid” he intended to go all the way.

But not right off the bat. “The Kid” opens with The Woman (longtime Chaplin collaborator Edna Purviance), whose “only sin was motherhood,” emerging from a charity hospital with a bundle of less-than-joy in hand. Hoping to give her baby boy a better life, she attempts to give him to a wealthy man,
but after a brief adventure with a couple of hoodlums, the poor titular Kid finds himself in the hands of The Tramp who doesn't immediately warm to the prospect of fatherhood. He initially attempts to abandon the baby in an alley, foist him off on a nearby mother and then a passing hobo, and even briefly contemplates dumping him down a sewer drain before finally deciding to adopt his darling “John.”

Once The Tramp commits, he commits all all the way, employing all his hardscrabble ingenuity to design home-made cribs, potties and all related accoutrements. An abrupt jump to Five Years Later shows that The Tramp has even taught little John (now played by little Jackie Coogan) a trade, employing the precocious tike to lob rocks through windows which The Tramp then conveniently offers to repair for a reasonable fee. 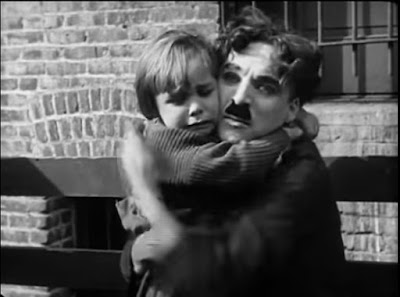 Lighthearted comedy yields to a gut-wrenching paternal melodrama. When authorities hustle the kid away from his unsanctioned home, The Tramp takes to the rooftops in a desperate race that ends with him leaping onto the back of a truck to embrace his darling child with tears streaming freely for everyone, including an audience who probably didn't think it was possible for Mr. Chaplin to find a way to make them root for The Tramp even more than they already had over the previous half-decade. They soon learned that they had hardly begun to cry, as child is inevitably reunited with mother (now a successful movie star) and the lonely Tramp is left slumped in a decrepit doorway to dream of a heaven where he still has someone to love him. Yes, Chaplin was absolutely shameless in toying with the audience's sympathy, but damned if he doesn't get away with it like almost nobody else could.

Chaplin's feature-length experiment was an unqualified success that further solidified The Tramp as the world's most beloved character, but it also helped to launch the career of its young star Jackie Coogan, five years old when the lengthy production began and a grizzled six by the end. If Coogan didn't quite match Chaplin's success, he came closer than anyone could have imagined, with his parents soon forming a production company just to manage (or, more often, mismanage) his considerable earnings from films like “Oliver Twist” as well as manifold product endorsements. Coogan practically invented the category of “child star” in Hollywood, with the various misfortunes attendant to the title.

Chaplin spent much of his later years re-cutting and re-releasing his silent films for contemporary audiences. In 1972, he lopped off several scenes with Edna Purviance's character and composed his own score for the film's newest theatrical tour. Criterion has included the 1972 version here (otherwise we wouldn't get the Chaplin score), but has also included several of the scenes and original titles cut from the 1921 version. 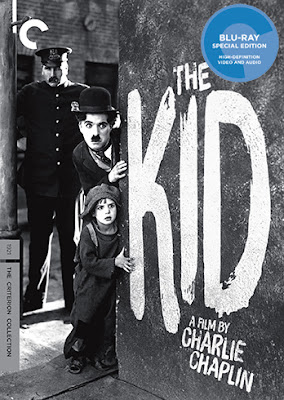 Video:
The film is presented in its original 1.33:1 aspect ratio. From the Criterion booklet: “This restoration was created from a 35 mm first-generation 1921 element preserved by the Cineteca di Bologna. The element was scanned in 4K resolution on an ARRISCAN film scanner and edited to match Charlie Chaplin's 1972 re-release; for a severely decayed 370-foot portion of the film, a first-generation 1921 fine-grain from the collection of Roy Export was used instead.” The restoration was completed in 2015 at the L'immagine Ritrovata labortory.

Sourced from this restoration, this high-definition transfer provides the best image quality most viewers have ever seen for “The Kid.” It's not perfect, mind you. The image is soft enough at points that some detail is difficult to pick out – you might have to hit pause to read a note at one point. However, the image quality overall is strong and, most importantly, whatever considerable restoration has been conducted does not result in any compromising of the rich grain structure so integral to the medium. This is an image with depth and texture even in some of its softer spots.

Audio:
The linear PCM Mono track presents the original score by Chaplin crisply and with little evidence of damage or distortion. Intertitles are, of course, in English.

Extras:
Wondering if you're not getting your money's worth with a film that runs under an hour? Well, that's a silly thing to think in the first place, but no worries, Criterion has stacked this Blu-ray release with extras.

The film is accompanied by a new audio commentary from Chaplin historian Charles Maland.

Four interviews kick off the bulk of the additional features. Recorded in 1980 (11 min.), a 65 year-old Jackie Coogan reflects on his work with Chaplin, remembering how his father, Jackie Coogan Sr., played multiple roles in the film and also how Chaplin's fake mustache had a distinct aroma. Amazingly, Coogan claims he never saw “The Kid” until Chaplin screened it for him in the 1930s.

Lita Grey Chaplin (1993, 10 min.) is interviewed by Chaplin biographer Jeffrey Vance. Grey plays a seductive temptress in Chaplin's dream of heaven in “The Kid” - she was all of 12 years old at the time. She would become Chaplin's second wife in 1924. Here she talks about both her time with Chaplin and her later career when she became a successful agent for several actors. Longtime Chaplin cinematographer Rollie Totheroh (1964, 8 min.) speaks in a brief audio excerpt. And Mo Rothman (1998, 10 min.), also interviewed by Jeffrey Vance, discusses his distribution deal with Chaplin which involved re-releasing several of Chaplin's films, including “The Kid,” beginning in 1972.

“Jackie Coogan: The First Child Star” (19 min.) is a 2015 video essay written and narrated by Chaplin historian Lisa Haven. In just under twenty minutes, Haven paints a fascinating portrait of a complex career. “The Kid” launched Coogan to stardom, but like many child stars, he didn't get to enjoy many of the benefits after his parents squandered his earnings on bad investments and other poor decisions, some possibly fraudulent. This led to the Coogan Bill designed to protect other child actors. Despite a series of personal tragedies and estrangement from his mother, Coogan found a way to re-ignite his career as an adult, perhaps becoming best known as Uncle Fester on “The Addams Family.”

“A Study in Undercranking” (2015, 25 min.) provides silent film specialist Ben Model the opportunity for some detailed visual analysis centered on the practice of undercranking. While film is (was... 'cause, hey, what's this thing you call film, buddy?) projected at 24 frames per second, silent filmmakers often shot at 12-16 frames per second, since they didn't need to worry about synchronized sound. As Model argues, they were fully aware of the difference between shooting and projection speeds, and performed accordingly. Masters like Chaplin could take advantage of the difference to achieve effects possible only on film. Model compares clips at different speeds to illustrate his argument. You might not be convinced by every example as the differences are sometimes subtle, but it provides a lot to think about, especially if you weren't aware of this practice before.

“From the 1921 Version” (7 min.) includes three scenes that Chaplin cut from the 1972 re-release, all of which expanded the story of The Woman. In 1972, of course, Chaplin wanted the film to be as centered on The Tramp as possible. You can also see the original 1921 Titles compared to the 1972 version (6 min. total).

“Charlie On The Ocean” (4 min.) provides some rather banal newsreel footage from Chaplin's much-publicized 1921 European tour, his first triumphant return home after taking America by storm in 1914.

“Nice And Friendly” (1922, 11 min.) was a short film shot quickly at Pickfair, the estate of Chaplin's friends Mary Pickford and Douglas Fairbanks. This knock-off was made by Chaplin as a wedding present to Lord and Lady Mountbatten who get to star in an adventure with The Tramp and a kid played by Jackie Coogan. Oh, those one-percenters of yore. The Tramp is only in it for a few minutes and the paper-thin plot is formulaic even by the most formulaic standard, so enjoy it as a curiosity piece rather than as a Chaplin masterwork.

Finally (whew!), the disc includes 8 minutes worth of trailers for the 1972 re-release of “The Kid” which played on a double bill with the 1921 Chaplin Short 'The Idle Class”in some markets. Trailers are included from the United States, Germany and Netherlands.

Final Thoughts:
Yeah yeah, “The Kid” is sappy. It delivers on its promise/threat to be “a picture with a smile – and, perhaps, a tear.” Here's my in-depth analysis of that: it just works. Chaplin found a way to make blunt pathos feel sincerely won and has left us with some of the most moving shots in film history. The ending of “City Lights” is still the tops, but The Tramp clutching Jackie Coogan in the back of a truck while both father and son weep is something nobody can ever forget.
Posted by Christopher Long at 10:59 AM