Mock Up On Mu 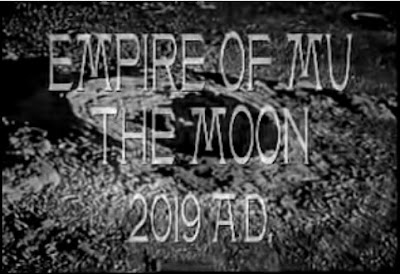 (Here's the thing. I absolutely loved "Mock Up On Mu" when I first wrote about it back in 2010, but more than five years later, I re-read my review and can't help but wonder if I really got it right or was hallucinating part of the experience. That's one of the many joys of a Craig Baldwin movie. And now that I am hip deep in the middle of reading "Gravity's Rainbow" it's impossible for me not to conflate my memories of the Baldwin science-sex-occult film with Pynchon's science-sex-occult book and, well, that's kinda groovy. In any case, "Mock Up On Mu" is awesome and here's my take on it.)


In one of the hundreds (thousands?) of old film clips that comprise the bulk of “Mock Up on Mu” (2008), we see a skull peeled to expose a brain for experimentation by a B-movie mad scientist. It’s an apt metaphor for San Francisco-based director Craig Baldwin’s ongoing project. He plucks brief movie clips (often from low budget sci-fi/horror films or educational movies) from their original context and, through image and sound editing, creates new neural connections among these previously disparate elements, rejiggering them all into the plastic cortical maps that comprise his “collage-narrative” model of filmmaking.

In a Baldwin film, we can leap from a Flash Gordon serial to the crop plane in “North by Northwest,” to a Department of Energy promotional film, to Sal Mineo as Gene Krupa, and then to an audio clip from Las Vegas’s “Star Trek: The Experience” without ever being taken out of the narrative because they are the narrative. Newly filmed footage is integrated seamlessly (or not, it doesn't matter) with archival clips, and his contemporary actors freely switch places with classic Hollywood stars within a single scene, all of them “collaborating” across decades to form a single conglomerate character. Baldwin’s films are about osmosis: the past flows into the present (and vice-versa), science fact into science fiction, paranoia into politics (OK, these two aren’t exactly opposites.)

“Mock up on Mu” tells the curious story of a trio of three historical figures whose paths crossed in 1940s Southern California. Jack Parsons (played here by Kalman Spelletich) was a rocket scientist who helped found the Jet Propulsion Laboratory, and also became obsessed with the occult writings of Aleister Crowley. He saw no conflict in spending one part of his life designing sophisticated engines and the other part trying to summon goddesses in dark rituals. During his occult practices he met actress/writer/author Marjorie Cameron who became his Scarlet Woman, his wife, and later one of the matriarchs of the modern New Age movement. I don’t mention the actress who plays Cameron for reasons that will be made obvious in the film.

Parsons and Cameron may be unknown to you, but you certainly recognize the name of a third person their lives intersected with, science-fiction author turned religious founding father L. Ron Hubbard. Hubbard, Parsons and Cameron immersed themselves in Crowley’s “sex magick” and their intertwining story gets too complicated to recount here, but not complicated enough for the purposes of the delightfully complicated Baldwin who layers his own original narrative on top of this more-or-less-true one.

The Year is 2019 and L. Ron Hubbard, still alive as he has been since he defeated Xenu and “seeded the world with science!”, has founded the Empire of Mu on the moon. It’s sort of a theme park, and L. Ron (as he is always referred to) needs to drum up more business so he sends the brainwashed Agent C (Michelle Silva) to seduce a military industrial stooge with the appropriate name of Lockheed Martin (Stoney Burke.) With Hubbard pulling the strings and literally twisting the dials in the background, Agent C also finds Jack Parsons who, unlike in real life, apparently didn’t die in an explosion. In fact, he secretly became Hollywood star Richard Carlson. Later they find Aleister Crowley in a cave. Then things get weird. The film, divided into a lucky thirteen parts, plays out like an adventure serial. It’s a shame it doesn’t come with its own decoder ring. 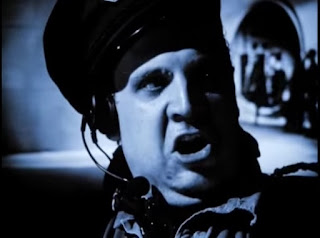 Hubbard, the Ming the Merciless-style evil mastermind of the film, is played by Damon Packard, a gifted filmmaker in his own right (his uncategorizable “Reflections of Evil” remains can be tracked down on a Tube of some kind if you can't find it on DVD.) Packard rants and gesticulates to great effect, and wears that cool Commander’s outfit better than L. Ron ever did. There is no synch sound in the film, so all voices are dubbed in later and Baldwin seldom tries to match dialogue with lip movement. Sometimes characters are heard speaking while their lips aren’t moving at all. It would seem to be a disorienting effect but in the fever-dream world of “Mock Up on Mu,” it just feels like the right stylistic choice for the material.

Baldwin certainly mocks (up) Hubbard’s crass exercise in myth-creation-as-capitalist-opportunism, but talk of Thetans and ancient warlords pales in comparison to the absurdity and the genuine horror of the “New Global Capital Regime” spearheaded by the likes of Lockheed Martin (the character, not the company, of course - the names are a total coincidence.) Science supporting the occult is deeply disturbing, but science used to design and manufacture weapons capable of destroying humanity a thousand times over is a genuine perversion. False prophets or fat profits. Take your pick as to which you find more grotesque.

Baldwin’s pastiche is powered by paranoia, but this mocked-up conspiracy theory isn’t meant to be sold as the truth - unless you think L. Ron has been hiding on the moon all these years working on the director’s cut of “Battlefield Earth.” The film’s alternate history is delivered tongue-in-cheek which is not to say Baldwin doesn’t have something serious to say about the horrors of the global military industrial complex and Hubbard’s corporate religion. He has a genuine fondness for his oddball historical figures, or at least for Parsons and Cameron whose histories get re-written with a Hollywood ending (sort of) which is only just considering how much Hollywood has unwittingly contributed to the making of “Mock Up.”

The film reminds me of a host of other material: “WR: Mysteries of the Organism,” George Alec Effinger’s “What Entropy Means to Me,” Feuillade’s “Les Vampires,” any random Guy Maddin film, and Infocom’s game “A Mind Forever Voyaging.” I make no claim that any of these sources served as inspiration for the film (except “WR” which must be a Baldwin favorite) but Baldwin’s cinema encourages the viewer to make these kinds of connections. Kenneth Anger is a more obvious source directly referenced in the movie (the real-life Cameron appeared in Anger’s Crowley-inspired “Inauguration of the Pleasure Dome.”)

“Mock Up on Mu” is a heady experience, an “ultimate trip” that packs in a hard-core lesson in film history along with its ingeniously deranged story of science, sex magick, and corporate crime. It has to be experienced (not just watched) to be understood. And even though Baldwin’s audiovisual bombardment can sometimes overwhelm the senses, the experience is a provocative, rewarding and thoroughly pleasure-filled one. 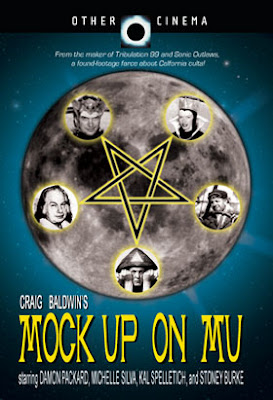 Video:
The DVD is presented in a full screen transfer. There are literally hundreds of different video sources used in the film, so there’s no way to evaluate the image quality in any traditional sense. Many of the film clips show deep scratches and wear and tear, but this doesn’t exactly detract from the experience of this time and genre hopping collage.

Audio:
The DVD is presented in Dolby Digital Stereo. No subtitles are offered which becomes a problem when you choose to listen to Baldwin’s commentary track but is otherwise not a significant drawback.

Extras:
The main Extra is a commentary track by Craig Baldwin, recorded from his basement while watching the film on his laptop. He identifies the source of many of the clips in the film which is helpful to those of us with obsessive minds, but he shies away from explaining his intentions too often which demonstrates some good old-fashioned horse sense.

A Behind-the-Scenes feature is really just a four minute clip of Damon Packard reading dialogue in his Hubbard Commander’s uniform. The DVD also includes a Trailer and Preview of the upcoming Other Cinema release of “The Damon Packard Collection.”

Final Thoughts:
Craig Baldwin was making mash-ups before YouTube made them ubiquitous. “Tribulation 99” (1992) was an eye-opener (or a mind expander, if you prefer) and his “Specters of the Spectrum” (1999) is, in my sometimes humble opinion, a hell of a great movie. I haven’t been fortunate enough to see “Sonic Outlaws” (1995) yet but, to borrow a phrase, I’ve heard good things.

His collage style may seem a bit more familiar now, but his films are still both idiosyncratic and radical. “Mock Up on Mu” is Baldwin’s first feature in nearly a decade and it is most definitely worth the wait. It has an organic, frenetic energy that few movies do.

“Mock Up on Mu” is distributed by Baldwin’s Other Cinema label.

Posted by Christopher Long at 11:38 AM