A Touch of Zen 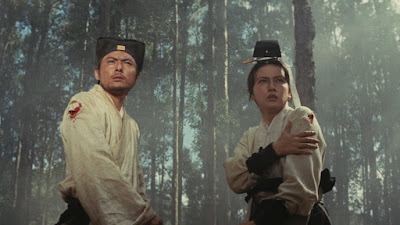 
King Hu's “A Touch of Zen” (1971) crosses several genres and explores multiple paths over the course of its three dynamic and unpredictable hours.

The film opens with a dark (almost too dark to see) montage of spider webs before cutting to empty patches of sky framed between forested hills, shots of tall grass with white fronds swaying in the breeze, and eventually to a survey of what appears to the smoking near-ruins of the fort that will serve as one of the film' central locations. After this extended moody and ominous foregrounding of environment, the film's first surprise is to start with the relatively light-hearted story of a low-level scholar, Gu Sheng-shai (Shih Chun), trying to make ends meet as a scribe and painter in a small town and also deflecting his mother's (Zhang Bing-yu) hectoring efforts to pressure him into marriage. Mother and son live in a dilapidated fort that is rumored to be haunted and, therefore, is rent-free. Maybe this will be a comedy.

Though the appearance of formidable characters like Ouyang Nian (Tien Peng) promises action, this landmark wuxia (“martial hero” or martial arts) film postpones its first fight for nearly an hour in favor of a portrait of everyday life in a rural Ming Dynsaty-era town and the gradual introduction of characters who will turn out to be more than what they initially appear. Chief among them are the “girl” who moves in next door in the rent-free fort, Miss Yang (Hsu Feng), the blind fortune teller Shi (Bai Ying) and the neighborhood herbalist Dr. Lu (Xue Han.) Gu also gets wrapped up in a confusing ghost hunt that never quite fully manifests, but plants the seeds for some later decisions.

So that's a slice of rural life in the Ming Dynasty with a dash of comedy and then a ghost tale before we even get to the wuxia, but it's coming. Once the first sword is drawn with that trademark metallic ring (prominently audible even when a sword is simply being pulled out of a belt loop) and the combatants begin trampoline-hopping through the air, Gu uncovers the real story: Miss Yang is a noblewoman whose family has fallen into political disfavor and Shi and Lu are the generals sworn to protect her from corrupt government forces. The complex intrigues of this subplot can be summed up succinctly: Don't piss off the Grand Eunuch. He's already kind of cranky.

Hu's film showcases several remarkable acrobatic displays, including a meticulously choreographed battle in a dense bamboo forest. The fighters can use a sword lodged in the wall or a tree branch to launch themselves to the sky and then spin back earthward in a graceful, deadly arc. Though battle sequences feature instances of close quarters rapid-fire editing, the film shifts scales routinely, from medium close-ups to distant shots in which the combatants are tiny figures on a stage, patiently circling each other and sharing the spotlight with the landscape. Humans and nature get roughly equal billing, and the film's widescreen frame is gloriously exploited right to its edges time and time again.

The fights, many the brainchild of martial-arts choreographer Han Ying-jie who also appears as the final baddie, luxuriate in the athletic feats of the performers (some of the actors could really fight, others could put up a convincing enough show) but “A Touch of Zen” demonstrates that military strength has its limits. The scholarly Gu is largely a bystander in the actual battles, but he assists Miss Yang and her bodyguards in planning the “subterfuge” necessary to defeat the Grand Eunuch's superior forces. A crucial battle at the fort would be hopeless without his cunning. Might doesn't always make right; sometimes it takes brains. 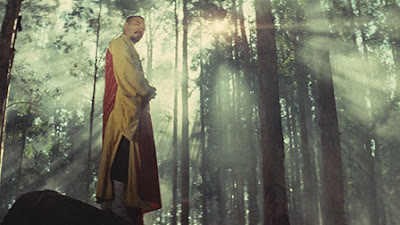 Perhaps the script's boldest move, however, is to highlight a third option, the spirituality referenced by the title. When a group of Buddhist monks appears on the scene, they are more than capable of besting everyone in hand-to-hand combat, but offer a more peaceful option to participants on both sides of the sprawling battle. Not everyone will be wise or bold enough to accept, but the film's late scenes argue persuasively that they should. And just for future reference, while you shouldn't piss off the Grand Eunuch, you'd really better not mess around with monks. Because that's not going to go well for you.

King Hu started his career as a set designer, actor, and writer, and directed his first film for Shaw Brothers Studio in Hong Kong. He soon relocated to Taiwan and formed his own studio, which brought both new opportunities and new limitations. As stingy as the Shaws could be, at least they were operating within the confines of a thriving national cinema. In Taiwan, most film production in the '60s was the product of government projects, and Hu had to build his own infrastructure almost from the ground up, founding a virtual school to train his actors and some of his crew. Hu wrote, directed, edited, designed the sets and costumes, and even did the calligraphy for the title sequences, which partially explains why he took nearly two years to complete production on “A Touch of Zen” though his much-touted penchant for perfectionism (of Kubrickian proportions, according to colleagues) accounts for most of it.

The film's producers were uncertain how to handle the release of this sprawling epic, and strong-armed Hu into chopping it into two films at first, then later released their own two-hour cut without the director's participation. Neither release succeeded. In 1975, the film was restored and re-assembled in its current form (or close to it) and played at the Cannes Film Festival where it won a technical prize and helped open international markets for wuxia films.

Although “A Touch of Zen” wasn't as successful commercially as King Hu's first Taiwan feature “Dragon Inn” (1967), the two films helped to establish him as one of the masters of the wuxia genre. His influence on younger filmmakers, even those far removed from the martial-arts scene, has only grown over the years. Tsai Ming-liang's “Goodbye, Dragon Inn” (2003) takes place in a Taipei theater screening Hu's “Dragon Inn” one last time before shuttering its doors for good, and the English title of Jia Zhangke's 2013 film, “A Touch of Sin,” is a tribute to King Hu, who passed away in 1997 at the age of 64. 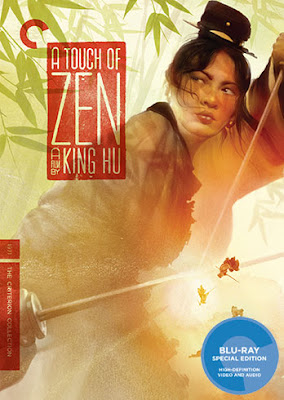 Video:
The film is presented in its original 2.35:1 widescreen aspect ratio. A 2014 4K digital restoration in Taiwan, described as “sponsored solely by actor Hsu Feng,” has been the source for the film's theatrical re-release as well as its European Blu-ray release and now this Blu-ray from Criterion. The colors are rich and image detail is sharp throughout. If there's any drawback, it's that the dark scenes are really, really dark, enough that it's hard to make out a lot of detail. I can't attest to how close that is to the film's original release, but it's most noticeable in the opening montage of spider webs and in the tail end of Gu's ghost fright at the fort. Overall, however, the high-def transfer is strong, providing a vibrant, enjoyable viewing experience.

Audio:
The linear PCM Mono track is flat, but very crisp and strong. Those metallic rings of swords being drawn really resonate, and the music sounds good as well. Optional English subtitles support the Mandarin audio.

Extras:
After a successful limited theatrical run this year, “A Touch of Zen” arrives on Blu-ray with a diverse selection of supplemental features from Criterion.

The collection includes 2016 interviews with lead actor Shih Chun (17 min.) and lead actress Hsu Feng (14 min.), both of whom discuss their working relationship with King Hu. The portrait that emerges is a combination of affection, respect, and intimidation. He could be a demanding taskmaster and work with him was both emotionally and physically grueling as he ordered endless re-takes on productions that lasted years at times. An additional 2016 interview with director Ang Lee (13 min.) provides a different appreciation, with Lee arguing that Hu may have been the first director to introduce a style-conscious approach to commercial Chinese filmmaking; at the very least, Lee contends that Hu made the first “art-house” wuxia films.

The disc also includes a 2012 documentary about King Hu (48 min.), directed by Hubert Niogret. We hear from a lot of film professionals and scholars in this documentary, though historian Peggy Chiao is probably the go-to expert. With interviews and film clips, this piece covers King Hu's career from his early work as a set designer, then through his acting and directing career, along with discussion of his production techniques and his place in film history.

The fold-out insert booklet includes an essay by film scholar David Bordwell along with a piece penned by King Hu as part of the press kit for the film's 1975 screening at Cannes.

Final Thoughts:
I've heard about “A Touch of Zen” for a while and I wasn't disappointed. A great release of “Dragon Inn” would be the most logical follow up. Solid transfer, strong extras. Highly recommended.
Posted by Christopher Long at 10:33 PM