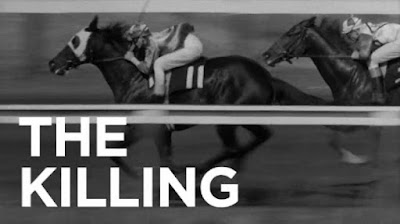 
(This Criterion release is only marketed as “The Killing” but also includes Kubrick's 1955 film “Killer's Kiss” which can hardly be categorized as a mere extra. The following review covers both films, though only briefly touching on “Killer's Kiss.”)

Stanley Kubrick was both a genre-hopper and a genre-conqueror. You won't have to look too hard to find a critic (Ed. Note: Hi, there!) who credits the versatile director for some or all of the following achievements: best war film, best gladiator film, best black comedy, best science-fiction film, best period/costume film, and best horror film.

Accompanying the always contentious claim of “best” is the notion that Kubrick the iconoclast challenged or redefined the conventions of each genre, a dubious argument that diminishes the genre in question. “Genre” is not an insult, nor is it something that needs to be transcended to achieve greatness. Genres are also constantly in flux, judged in relation to different reference points and shifting with each new entry in the field.

I'm not sure if “The Killing” (1956) qualifies as the best film noir (I'm not sure it isn't, mind you) but it's certainly one of the most accomplished and engrossing examples of the genre, not to mention one hell of a feat for a 28-year-old filmmaker previously accustomed to shooting independently and on micro-budgets. “The Killing,” adapted from the novel “Clean Break” by Lionel White with “additional dialogue” by pulp novelist Jim Thompson, is the tale of a daring heist at a horserace track that, like most noir crimes, goes terribly wrong.

The basic story is fairly standard issue. Johnny Clay (Sterling Hayden), fresh out of a five-year stint in the joint, has decided to shoot for big game in his crime comeback. And why not? “They can put you away just as fast for a ten-dollar heist as they can for a million-dollar job.” Make it a two-million-dollar job. Clay intends to rob the cash room at the Lansdowne Park Track during the feature race and enlists the aid of several accomplices for the big caper: his reliable older friend Marv (well-weathered Jay C. Flippen), betting window clerk George (Elisha Cook Jr.), policeman Randy (Ted DeCorsia), bartender Mike (Joe Sawyer), and psychotic gunman Nikki (Timothy Carey).

Clay's plan is fabulously complicated, part of the reason it's doomed to fail, another part being that it's a crime film made near the tail end of the Production Code era, when crime could never pay. Call it chance, call it fate, blame it on the mental and moral shortcomings of low-down rotten crooks; as “The Killing” hurtles to its denouement, the center falls apart, unraveled by a yapping dog here and an unlucky horseshoe there. 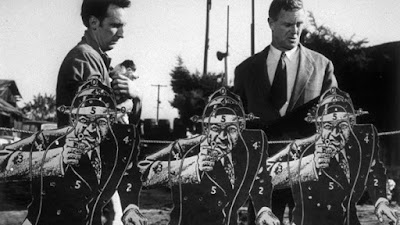 The labyrinthine plot seems all the more complex thanks to the time-hopping narrative. The title sequence begins with documentary-style footage of a horse race accompanied by a booming Gerald Fried score that builds to a crescendo, only to be diffused by the sight of a disheveled Marv shuffling forlornly through the track's betting parlor on his way to order a ginger ale. Then a no-frills, staccato narrator guides us to a scene from “an hour earlier” and then another shortly before that, then the day after that, methodically assembling the various strands, characters, and perspectives who will eventually reconvene with thirsty Marv in that betting parlor.

Kubrick's looping narrative structure attracts a great deal of attention, frequently being described as ground-breaking. While the chronological structure is complex, it's not designed to obfuscate or turn the film into a puzzle-piece movie; the time is almost always clearly indicated and the moving parts of the elaborate heist meticulously detailed. The shifts ironically undercut the dramatic flow of the story, but emphasize the inevitability of everyone's fate rather than straining for ambiguity. In doing so, Kubrick was mostly following White's novel, first brought to his attention by co-producer James B. Harris, and it was precisely the twisted chronology that attracted their attention in the first place.

The attention lavished on the chronological shifts detracts, in some ways, from appreciating “The Killing” as a technically brilliant but fairly traditional take on the film noir with its doomed criminal protagonists, its cynical worldview, its shadowy interiors, and even the obligatory if atypical femme fatale (Marie Windsor). The young director was not afraid to butt heads with veteran cinematographer Lucien Ballard, insisting that the film be shot with a wide-angle lens (25 mm.), enabling the roving camera that would become a Kubrick trademark to transform the sparsely-designed sets into foreboding, confining extensions of ill-fated characters often partly obscured by the harsh, abstract lighting scheme. “The Killing,” of course, can only exist in stark black-and-white.

“The Killing” takes full advantage of its cast of memorable character actors. In a bravura solo sequence, Kubrick veteran Timothy Carey struggles to maintain an unconvincing “normal” smile before unleashing the rampaging beast within. Elisha Cook Jr. is a tiny, twitching bundle of paranoid neuroses begging to be bullied by his boozy, domineering girlfriend (Windsor). Real-life chess teacher/wrestler/Kubrick friend Kola Kwariana gets to show off his hairy barrel chest in a barroom brawl for the ages.

Still, it's star Sterling Hayden who gets the film's signature line. His barely whispered “What's the difference?” provides one of the greatest punctuations in any film and practically serves to break the fourth wall, an acknowledgment that Johnny Clay realizes what genre he's trapped in and understands how it all has to end.

“The Killing” is often described as Kubrick's first fully “mature” feature, but “Killer's Kiss” (1955) shouldn't be dismisses as a mere “student film” as Kubrick sometimes labeled it. His self-financed (i.e. hitting up friends and family for money) second feature is fairly light on story. Davey Gordon (Jamie Smith) is a fair-to-middling boxer who blows his big chance in the ring, but finds love with his willowy neighbor Gloria (Irene Kane), a dance-hall girl trying to fend off the advances of her thuggish boss (Frank Silvera). Davey winds up fighting said boss and his goons in a crisp tale that's over in about 67 minutes.

Kubrick directed, edited, shot, and co-wrote the film on a shoestring budget, and turned out a polished product with a lively, if slightly hokey, final battle in a warehouse filled with mannequins. Some of the best sequences capture the essence of New York street life, and a frenzied rooftop chase also provides a view of the city from up high, all of which is a reminder that Kubrick got his start as a still photographer and documentarian. He also cast his then-wife Ruth Sobotka as a ballerina. “Killer's Kiss” came and went in theaters, but proved that the young maverick could make a studio-quality picture and helped to convince United Artists to invest in “The Killing.” 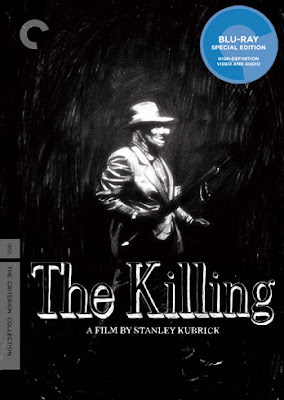 Video:
The film is presented in a 1.66:1 aspect ratio. If any of you still need to engage in the endless wars over the “correct” ratio for various Kubrick films, please wake me up when you're finished. It was shot 1.33:1, but intended to be matted and shown in wide-screen. What's the “correct” ratio? Ask Stan when you see him.

This 1080p transfer showcases the rich thick-grain structure so essential to appreciating the harsh black-and-white photography from Lucien Ballard. Close-ups show strong image detail- I particularly took note of the detail in the shot where Elisha Cook digs his fingernails into the skin below his eyes while listening to Marie Windsor spin her lies.

“Killer's Kiss” gets a high-def transfer in 1.33:1 ratio. It's not quite as sharp as “The Killing” but a vast improvement over the previous no-frills DVD release by MGM.

Audio:
The LPCM Mono mix is crisp but flat. I feel like I write that an awful lot, but then again there's seldom much to say about audio, after all, except when there's something noticeably wrong, which isn't the case here. Anyway, optional English subtitles support the English audio.

A brief note. The English subtitler was apparently not familiar with the chess term “patzer” which is listed in the subtitles as the mysterious “patsan.”

Extras:
The disc features a 2010 interview with producer James B. Harris (21 min.) who discusses the development of “The Killing” in quite a bit of detail, and also addresses his subsequent partnership with Kubrick.

The Blu-ray also includes excerpts from two episodes of the French TV series “Cinema cinemas” featuring interviews with Sterling Hayden. They aired on April 1 and July 3, 1984. They play as one feature and run 23 minutes total, and feature Hayden in his late sixties reflecting on his career.

Robert Polito discusses (19 min.) the contribution of novelist Jim Thompson, hired by Kubrick and Harris to provide “additional dialogue” though that description understates his involvement in the project. Indeed, Thompson was unhappy with the credit he was given, but still worked with Kubrick on “Paths of Glory.”

As mentioned above, the film “Killer's Kiss” is also included as an extra. Under the menu option for the film, viewers can also select Geoffrey O'Brien's brief visual analysis (9 min.) of “Killer's Kiss” which emphasizes early examples of what would become Kubrick hallmarks.

Trailers for each film are also included.

The 20-page insert booklet includes an essay by Haden Guest, director of the Harvard Film Archive, and a short excerpt from an interview with actress Marie Windsor.

Final Thoughts:
I guess there's no such thing as an underrated Kubrick film. But if there was, this might be it.
Posted by Christopher Long at 1:39 PM