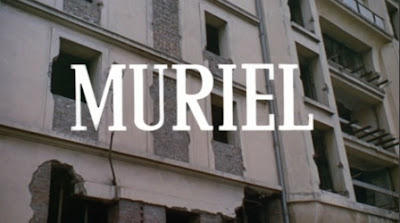 
“Muriel, or The Time of Return” (1963) features several returns and no Muriels. Twenty-something Bernard (Jean-Baptiste Thierree) has recently returned from a tour of duty in Algeria to live with his stepmother Helene (Delphine Seyrig) in the French fishing port of Boulogne. Silver-haired Alphonse (Jean-Pierre Kerien) has also returned to see Helene for the first time since they parted ways after a tempestuous love affair back in 1939. For her part, Helene has lived in the same place for some time, but wrote a letter to Alphonse imploring him to visit after memories of their time together returned to her quite unexpectedly.

In this original screenplay by Jean Cayrol (who had previously written the voice-over commentary on Resnais' 1955 Holocaust documentary “Night and Fog”) everyone is hiding a secret, including the young “niece” (Nita Klein) the aging Alphonse brings with him. Vain blowhard Alphonse may well be lying about everything in an effort to escape his responsibilities, while Helene's denial of reality relies on her claimed inability to remember the past: “My memory's so awful! I forget everything.” Poor Bernard must be jealous. He cannot forget about the absent Muriel, not for one second, and his obsessive recall will drive him to desperate measures.

After the enigmatic art-house hits of “Hiroshima, Mon Amour” (1959) and “Last Year at Marienbad” (1961), director Alain Resnais had established himself as a master of elliptical editing and the great cinematic poet of time and memory. Yet again in his third feature, the past constantly impinges on the present, defining and deforming it whether the characters try to run from their memories or wallow helplessly in them.

The film does not jump around chronologically nearly as much as Resnais' previous two, but the dense montage can be just as challenging, requiring multiple viewings before any informed attempt to digest the movie. In one complex scene, Resnais leaps between two simultaneous conversations in a bar. Character A speaks to Character B and Character C to Character D, but a line from A is followed by a line from C, then to B, then to D. In other sequences, abrupt cuts to objects or buildings don't readily yield meaning, though it would help modern viewers immeasurably to know that Boulogne was devastated during the war and then quickly reconstructed, much like the characters have attempted to reconstruct themselves post-war (Helene and Alphonse after WW2, Bernard after Algeria).

The constant fringe presence of Algeria was a bold choice for Resnais at a time when the French public usually heard the Algerian War described as the Algerian “events.” In the film, Algeria is a very recent past constantly impinging on the present not just of Bernard but also of a French populace eager to banish it from everyday awareness as much as possible.

Architecture and objects feature almost as prominently as the characters. We see multiple shots of a casino, usually framed from the same angle, looming in the background before becoming aware that Helene is addicted to gambling. Helene is an antique dealer (the past again, of course) which explains why the furniture in her apartment, which doubles as her storefront, changes subtly throughout the movie. The opening scenes of “Muriel” feature a rapid-fire montage of objects (a gloved hand, a teapot, a chandelier) that might put some viewers in mind of the magisterial opening of “Marienbad” and cause others to dread the portentousness that might follow. 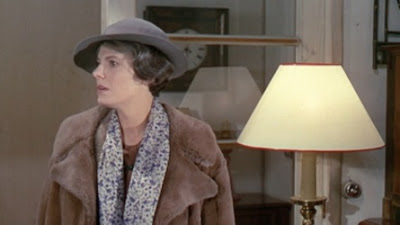 Just two years after she played a glamorous object of desire in “Marienbad” it's a bit difficult at first to process Seyrig (just 30 at the time) in her gray-black wig made up to look the middle-aged widow, but she distinguishes herself radically from her previous signature role. Helene is a bundle of nervous energy, constantly smoking or fiddling with bric-a-brac, or bustling around Boulogne on errands that usually end with her flushing money down the casino toilet. Yet for all her nervous kinetic energy, Helene is trapped in stasis with little hope of ever breaking out. Ditto for Alphonse and the pressures build to histrionic levels punctuated by a jangling operatic score by Hans Werner Henze.

“Muriel” completed what may well be the greatest first three features any director ever made. Add in the brilliant short films he made before “Hiroshima” and I challenge you to find any filmmaker whose first decade of work is more accomplished. His final five decades weren't half bad either. 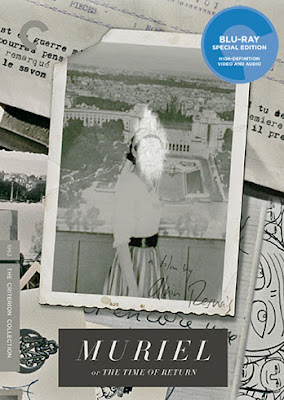 Video:
The film is presented in its original 1.66:1 aspect ratio. This high-def transfer is sourced from a recent digital restoration by Argos Films. The only copy of “Muriel” I own is the 2007 Koch Lorber DVD which seemed adequate at the time, but looks inferior almost a decade later. The colors in this version are somewhat muted which I believe was Resnais' intention. The image detail is sharp throughout with a subtle grain structure enhancing the filmic quality of the picture. If it's not the top end of Criterion's high-def transfers, it's still quite impressive and a world of improvement beyond the old DVD. Well worth a double dip just for the upgrade in visuals.

Extras:
Criterion has gone a bit light with the extras this time.

The only substantial supplement is a 2016 interview with film scholar Francois Thomas which covers a lot of ground in 27 minutes. Thomas provides some historical context regarding the Algerian War and also discusses writer Jean Cayrol's collaboration with Resnais. The most interesting bit of info here is that Resnais' shooting script is remarkably close to the final cut of the film, evidence that Resnais was able to see most of the shots in this densely edited film before the camera rolled.

The other extras are short archival excerpts. In an excerpt from a 1980 TV documentary, Jean Cayrol talks briefly (5 min.) about working with Resnais. In a 1963 excerpt (4 min.) from the French TV show “Discorama,”composer Hans Werner Henze discusses his strident, operatic score for the film. My favorite of these bits by far is a 1969 excerpt (4 min.) from a French TV show in which the great Delphine Seyrig discusses the differences between her characters from “Muriel” and from “Marienbad.” I really wish this one had been longer.

The final extra is a lengthy Theatrical Trailer (4 min.)

Final Thoughts:
Speaking of memory, watching “Muriel” again (this is my fourth time through) is a reminder of how devastating the losses of the last few years in the film world have been. Abbas Kiarostami, Michael Cimino, Chantal Akerman. My apologies for any of the departed directors whose losses I forgot/suppressed. It feels like this brutal wave was kicked off by the death of Alain Resnais in early 2014. That's probably a false impression, but I remember thinking at the time, “Cinema might not be dead, but it is no officially dying.”
Posted by Christopher Long at 11:30 PM