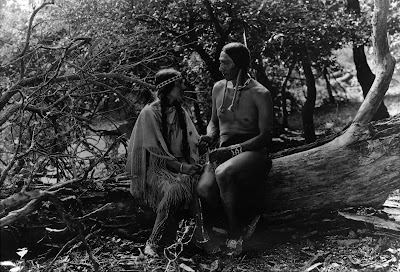 
The film's title character received her name because “she was ushered into the world as the sun rose,” as simple and poetic an origin story as you'll ever hear told. Now a young woman, Daughter of Dawn (Esther LeBarre) shines brightly for both her father, the Chief (Hunting Horse), and her Kiowa tribe, attracting the romantic attention of both the lithe, handsome White Eagle (White Parker) and the somewhat older, heftier Black Wolf (Jack Sankey-doty). Daughter of Dawn's preference for the former sets into motion the love triangle that powers the main narrative; actually, it's a rectangle since shy, innocent Red Wing (Wanada Parker) adores Black Wolf, who barely acknowledges her presence. Jealousy, betrayal, great feats of courage, a Comanche attack, and a huge bison hunt follow on the path to the requisite happy ending.

As a narrative, “The Daughter of Dawn” (1920), loosely inspired by a Comanche legend, didn't blaze any fresh territory, but the story of the film's production and later recovery has few parallels in cinema history. Producer Richard E. Banks had lived among various Native American tribes for many years and was eager to bring some of their stories to the silver screen with a sincere attempt at authenticity. “The Daughter of Dawn” was one of the few silent films shot with an all-Indian cast, consisting of about 300 Kiowa and Comanche actors, and was filmed entirely in the Wichita Mountains Wildlife Refuge in Oklahoma. The aforementioned White and Wanada Parker were the children of famed Comanche chief Quanah Parker, and also the grandchildren of Cynthia Ann Parker, the real-life inspiration for the Natalie Wood character in “The Searchers.” 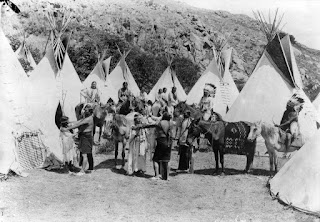 The actors brought their own clothing and equipment, including teepees, to the set, a great boost to a production short on resources, enabling filming to proceed relatively smoothly over the summer of 1920. Though nobody will be surprised when Daughter of Dawn and White Eagle get together in the end, the film features plenty of unexpected treats for the viewer. The bison hunt is majestic both for the rumbling herd and the graceful riders in pursuit, and the harrowing lover's leap off Medicine Bluff is a show-stopper. Oh, the things men will do for love. A Kiowa celebration after a successful hunt is unforgettable, as is the brutal insult Daughter of Dawn's father drops on a disgraced Black Wolf: “When the brave die they travel toward the setting sun... Turn your face to the rising sun and go!” Ouch.

Director Norbert Myles, a vaudeville veteran helming a film for the first time, shoots in a plain, unobtrusive style with a fixed camera, heavily favoring wide shots that showcase both the authentic-looking village sets and the spectacular Wichita Mountains, practically characters in their own right. Blue-tinted night scenes add the occasional visual accent.

“The Daughter of Dawn” screened to a preview audience in 1920 and played a few times in small venues after, but never received an official public release and disappeared like so many movies of the era. When mentioned by film scholars as recently as the turn of the 21st century it was always described as one of silent cinema's many “lost films.” For the first time ever, film scholars were proven wrong when a 2004 phone call changed the record. That's when a private detective contacted the Oklahoma City Museum of Art to inquire about a dusty old film print a client had given him in lieu of cash for services rendered. He wondered what it was and, more importantly to him, how much it might be worth.

Suddenly, “The Daughter of Dawn” was more than a legend and, even more amazingly, it had survived largely intact save for some truncated intertitles. Eventually the print was purchased from the detective and found its way to the Oklahoma Historical Society and then to Hollywood's Film Technology Lab for restoration and preservation. Composer David Yeagley, a Comanche, wrote an original score for the film which was then performed by music students at Oklahoma City University. In 2013, this “lost film” was selected by the Library of Congress to be preserved in the National Film Registry. And now, with the contribution of the good folks at Milestone Film and Video, “The Daughter of Dawn” has received its first theatrical release and, finally, this exquisite Blu-ray edition.

And that gives the film an even better origin story than its title character. It also gives you the chance to see something special. 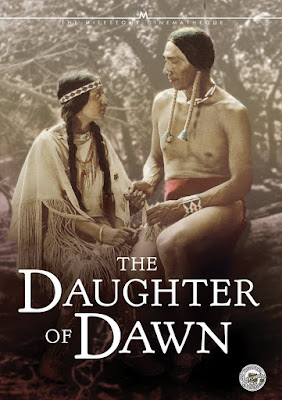 Video:
The film is presented in a 1.33 aspect ratio. For a film once thought lost and stored for 80+ years under unknown conditions, it looks shockingly good. I don't know how much of that owes to the restoration or just some miracle of storage, but the image quality is sharp enough to highlight both the scenery and the actors' faces and costumes. There's a lot of detail visible here, a real thrill for anyone who appreciates this access to Kiowa and Comanche people and customs from almost a century ago. There are instances where the footage shows some signs of deterioration and the occasional skipped frame, but the final product is as surprising as it is pleasing. Occasional tinting has been preserved and the illustrated intertitles are pretty neat too.

Audio:
The new score composed by David Yeagley (who passed away in 2014) sounds sharp and resonant in this mono mix. Not a whole lot to say here, but certainly nothing to complain about either. Audio on all the extras is clearly recorded.

Extras:
If you're at all familiar with Milestone releases, you know they work tirelessly to pack their DVDs and Blu-rays with as many informative supplementary features as possible. “The Daughter of Dawn” is no exception, though the extras are mostly on the short side.

First up is a brief (4 min.) introduction by Dr. Bob Blackburn of the Oklahoma Historical Society (OHS) which provides some historical context, mostly about the shooting location.

“Finding the Film” (6 min.) gives Bill Moore of the OHS a chance to tell how he learned about the mysterious private detective and that old movie he had for sale. I really wish this feature was longer. This is a great story that needs to be told in detail.

Two “Heritage” interviews are included. The first interview (8 min.) is with Darren Twohatchet, a video producer and member of the Comanche and Kiowa tribes. Twohatchet is a film scholar as well as producer and shot some interviews back in the '90s about “The Daughter of Dawn” when it was considered to be a lost film. We see a few clips from those here, including interviews with Gina Quoetone Bointy and Helen Quoetone Curley, who both acted in the movie. In the second interview (6 min.) , Dorothy Whitehorse, a Kiowa woman, identifies several of the performers in the movie, many of whom she knew.

We also get a brief piece (3 min.) in which William D. Welge of the OHS tells how Magdalene Becker, a Mennonite Missionary and “Assistant Field Matron,” filed a concerned official report about the Kiowa and Comanches who had gathered together to shoot a movie. Oh, horror! She suggested the project be broken up, but was fortunately unsuccessful.

The collection wraps up with three short pieces about the making of the new original score for the film. These includes interviews with Mark Parker (4 min.) of the Oklahoma City University School of Music, Benjamin Nilles (3 min.), musical director and conductor of the Oklahoma City University Symphony, and John Cross (4 min.) who talks about the technical challenges of recording the University's performance of the score.

Final Thoughts:
What's left to say? A movie long believed to not even exist anymore not only survives intact, but can now be seen by anyone with the sense to get their hands on this great Blu-ray release from Milestone Films.
Posted by Christopher Long at 11:00 AM