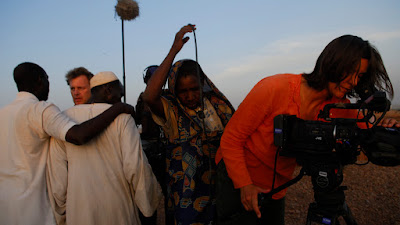 
In “Cameraperson” (2016), veteran documentary cinematographer Kirsten Johnson weaves together footage from twenty-five years worth of her film projects into an intricate and moving memoir that spans both continents and decades. The diverse array of subjects is dizzying, from a harrowing delivery in a Nigerian maternity ward to the reluctant testimony of war crime victims in Bosnia and even to the spectacle of a performative Jacques Derrida holding court on a Manhattan street.

Though she does not appear onscreen in full until the final moments of the movie, Kirsten Johnson's presence is felt in nearly every moment. In a film packed with riveting and sometimes devastating footage, one of the most memorable moments (commented on in at least half the reviews I've read) is also one of the quietest ones. Very early on, a dazzling bolt of lightning stabs down in the distance, prompting a startled gasp from Johnson (off-screen) which is then followed by two quick sneezes, making Johnson's camera wobble just as the film's title pops up, a gentle opening for a film which pays witness to a good deal of trauma.

In another shot, Johnson's hand enters the frame to clean off a car windshield in Yemen and we hear her off-screen voice often, but, as (re)contextualized in “Cameraperson,” the raw footage itself provides a constant reminder of Johnson's role in its making as the cinematographer, a role few viewers are likely to have given much thought to. The personality that emerges from behind that wide-roving camera is charming, playful, humble, witty, and, above all, deeply and personally engaged with her subjects.

This is crucial considering the perils aplenty in appropriating footage of documentary subjects (given by request to Johnson from the various directors of her many projects) for a movie they couldn't have known about when they were first filmed. But Johnson's empathy for her subjects spills out from behind the camera to the screen and then overflows the edges of the frame, and foregrounding her involvement with her subjects is one of the keys to the film's ethical and aesthetic structure. 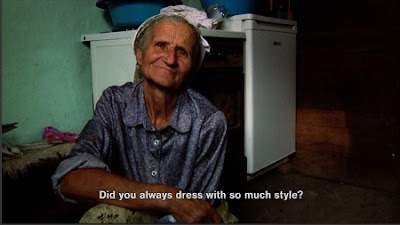 Though “Cameraperson” is very much a movie about the workplace (a globe-sized workplace), the footage proves that it was never just a job for Johnson or, perhaps more accurately, that she sees the professional as inextricably intertwined with the personal. Her empathetic eye leads directly to some of the film's most poignant moments, such as when she scrambles to follow a young Brooklyn boxer, stinging and raging from a narrow defeat, as he rushes for a comforting hug from his mother. Johnson's camera practically hugs the two of them, but from a respectful distance. Her instincts produce another memorable moment when an elderly Bosnian woman clearly remains too frightened to speak of the war crimes she witnessed (“I have no problems, and I never did!”) and Johnson brilliantly steers the conversation out of a dead end by asking the woman if she has always dressed so stylishly (“Always!”) You need to be intimately involved with the person you're filming – you need to care – to think of a question like that in such a moment. So much for the tired, debunked, yet stubbornly clinging notion that a documentarian's prime directive is never to interfere.

Johnson gets directly personal by also cutting in footage of her twin babies and then, most unforgettably, of her mother, suffering from advanced Alzheimer's and obviously not always clear about what's going on. This once again raises the specter of exploitation, but the answer to that thorny issue has always been a straightforward but unsatisfying one: you simply have to trust the documentary filmmakers to make responsible and ethical choices. No ideology, no non-fiction manifesto, no stylistic choice guarantees either truth or ethical clarity – only the judgment of the people making the film. By showing all of her work, by exposing herself on such a personal level, bu so clearly asking the tough questions of herself, Johnson provides viewers the access necessary to evaluate her integrity and her acumen.

“Cameraperson” is one the most remarkably edited films of recent years (with Nels Bangerter credited as editor and Amanda Laws as co-editor), leaping back and forth in time and across continents, chronology and geography subsumed into the film's broader philosophical arguments. After one Bosnian woman's harrowing testimony about systematic rape during civil war, the film cuts abruptly to cheerleaders whipping up the crowd at Penn State. Western viewers who were just wondering “How could they cover up such atrocities over there?” get their answer. Just as important, “Cameraperson” devotes considerable screen time to less overtly dramatic or traumatic footage. Bosnia is the film's most-visited location and it is the source of much trauma and horror, but Johnson also devotes plenty of time to the beauty of the countryside, the fresh food a family harvests, the quiet peaceful moments that make up their lives today.

I've watched “Camerperson” three times now and I am convinced it's one of the best and most vital films of the decade, so rich and so thoughtful that I still feel inadequate to plumb its depths or describe them. I promised myself a while ago I wouldn't rely on the cop out “You just have to see it yourself” so instead I'll say that I just have to see it again. And then again. Give me another year or two to think about it, and I'll get back to you. That seems only fair. Johnson spend twenty-five years making it, after all. 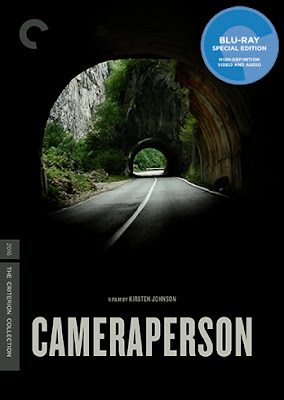 Video:
The film is presented in its original 1.78:1 aspect ratios. The footage is culled from many sources, mostly digital. Despite the different sources, the 1080p transfer doesn't vary much in quality – I suspect the biggest challenge was in color correction, striking a balance between a consistent look for “Cameraperson” while also being true to the visual design of the original footage. In any case, the high-def transfer looks quite sharp and pleasing.

Audio:
The DTS-HD 5.1 Master surround track is crisp though the sound varies from source to source (the difference in sound among the many clips is more noticeable than the difference in image). Some footage has burned-in subtitles for various languages and Criterion provides an English SDH option for the English dialogue as well.

Extras:
“Editing 'Cameraperson'” (36 min.) provides fascinating insight into the development of the film, especially the considerable changes it underwent during post-production. According to Johnson and collaborators such as editors Amanda Laws and Nels Bangerter, “Cameraperson” began its lengthy journey as a much more “standard” documentary/memoir complete with extensive narration. But realizing that it wasn't quite working, Johnson and crew kept exploring new versions, coming up with what Johnson calls the “trauma cut” which was quite devastating then changing direction for its final, radically different configuration.

“In the Service of the Film” (39 min.) is a round-table discussion with Johnson, filmmaker Gini Reticker, and sound recordists Wellington Bowler and Judy Karp. It covers some similar ground to the “Editing” piece but expands to discuss different aspects of production, all emphasizing the collaborative nature of the project.

The disc also includes two “Festival Talks.” First, a Q&A session from a 2016 screening at the Traverse City festival (22 min.) with Michael Moore interviewing Johnson on stage, and then an Aug 15, 2016 Q&A session (15 min.) at the Sarajevo Film Festival.

Criterion has also included “The Above” (8 min.), a 2015 short film by Johnson which takes a U.S. military surveillance balloon in Kabul as its focus point, emphasizing how its looming presence affects the lives of people on the ground.

A Theatrical Trailer (2 min.) rounds out the supplemental features.

The slim fold-out booklet includes an essay by filmmaker Michael Almereyda and also conveniently provides a complete list of the films from which Johnson has culled her footage.

Final Thoughts:
I'll keep it simply. “Cameraperson” is one of the best documentaries of the 21st century, and thus also one of the best films of the century. As a documentary memoir it has few peers. I was going to write “though the names Chris Marker and Agnes Varda spring to mind” but I wouldn't want to put that kind of pressure on Kirsten Johnson whose work stands quite proudly on its own.

Posted by Christopher Long at 11:20 PM