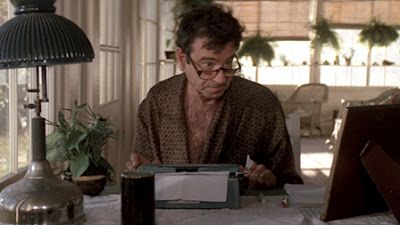 
Some spies want to save the world, and some are in it just to get laid. Veteran CIA superagent Miles Kendig (Walter Matthau) just wants to be a bit of a prick.

Kendig, the protagonist of “Hopscotch” (1980), has his reasons. After wrapping a flawless mission during Oktoberfest in Munich, Kendig returns home to learn that he's being shunted to a desk job by his newly appointed boss Myerson (Ned Beatty), an officious paper-pusher short on both imagination and stature. Not one to sulk, Kendig immediately leaps into action, destroying his files and decamping for Austria where he hooks up with old flame Isobel (Glenda Jackson), a semi-retired agent with a similar contempt for the bureaucracy. 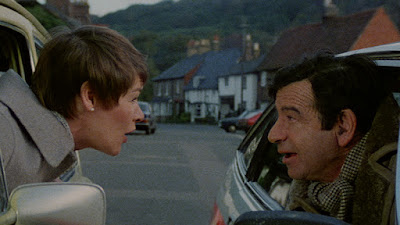 Kendig launches one of the most idiosyncratic plans in the annals of spy thrillers: he writes his memoirs and taunts agencies around the globe by mailing them a chapter at a time from various hideouts throughout Europe and America. A terrified Myerson enlists the aid of Kendig's star CIA pupil and number one fan Joe Cutter (Sam Waterston) to “eliminate” the growing threat posed by the rogue retiree.

Matthau was born with drooping jowls and an AARP card, and it's hard to imagine anyone more perfectly suited to the role of the smartass who refuses to be put out to pasture and wants to make sure his bosses know about it (it's equally difficult to believe he was only 59 at the time). Kendig enacts an overly elaborate and risky scheme simply because it amuses him. He could wait until completing his memoirs before sending them to a publisher, but that wouldn't force Myerson the putz to scramble agents across the globe, always trailing one step behind. He knows his phony Southern accent convinces absolutely nobody, but he deploys it anyway just for shits and giggles. And as for where he decides ultimately to set up his headquarters, well, that's the ultimate flipping of the bird.

Though Myerson is exactly the kind of schmuck who would order Kendig to be “eliminated,” viewers will soon catch on that “Hopscotch” is not the kind of film in which Kendig or anyone else will actually get eliminated. Adapted from a more serious novel by Brian Garfield (author of “Death Wish” which inspired the gentle, philosophical film starring Charles Bronson), “Hopscotch” plants tongue firmly in cheek by sending up the paranoia and pretensions of Cold War spycraft, with the full force of the CIA deployed in a low-stakes venture where professional ego, not global security, is all that's on the hook.

Director Ronald Neame claims he had to be dragged kicking and screaming into the project, finally convinced only by the casting of Matthau. The immaculately directed film displays no signs of Neame's initial reluctance, leapfrogging all across the globe with glee and grace while maintaining a delicate comic balance. Though Myerson blusters and Matthau's schemes become implausibly complex at times, Neame (working from a script by Garfield and Bryan Forbes) still paints in naturalistic tones. His CIA men and the requisite Russian counterpart (played by the great character actor Herbert Lom) are entirely plausible buffoons (or, in the case of Cutter, skeptics who would rather see Kendig get away), bundles of righteousness and insecurity working out their neuroses in the field. Occasional dialogue exchanges deflate them with reminders of their numerous publicly-known failures. If there's one shortcoming in the film, it's that the magnetic Glenda Jackson is too often relegated to the sidelines, just waiting around for phone calls from the impish Kendig who gets to have all the fun.

Matthau is just phenomenal in this movie. He's one of the very greatest actors of all-time, so he's phenomenal in just about everything, but every choice he makes here is pitch perfect. Even a small choice like the way Kendig whistles and hums along to his beloved Mozart at strategic points adds layers to the character that no tedious exposition could provide. The supporting cast is great too, but “Hopscotch” is a pure joy to watch just for the sheer spectacle of Matthau operating at his peak. 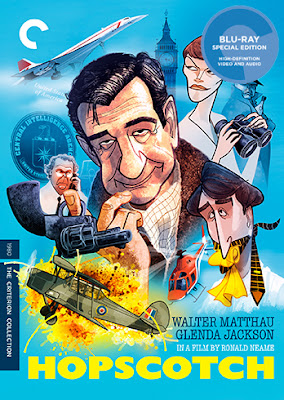 Video:
The film is presented in a 2.39:1 aspect ratio. This 2K high-def restoration is sharp in detail if not quite eye-popping in terms of depth or vibrancy. I'd rate this a mid-level Criterion effort which means it is very good, but not quite top shelf. I don't have the 2002 SD DVD release from Criterion as a comparison point, but I have no doubt this represents a significant improvement.

Audio:
The linear PCM audio mix is crisp and efficient, if not overly dynamic. Dialogue and sound effects are clear, as is the frequent Mozart music. Not much to say here. Optional English subtitles support the English dialogue.

From the 2002 DVD release, they have imported an interview (22 min.) with director Ronald Neame and novelist/screenwriter Brian Garfield. Neame talks about his reluctance to direct the project and the pleasure of working with Walter Matthau, Garfield talks about his interest in following up the violent “Death Wish” with a spy novel in which nobody gets hurt at all. Also imported from the old DVD are a Trailer (3 min.) and a Teaser (2 min.)

New for this Blu-ray, Criterion has added an excerpt (22 min.) from a 1980 episode of the “Dick Cavett Show” with Walter Matthau. It's entertaining, but pretty lightweight fare.

Final Thoughts:
I had never seen “Hopscotch” before watching it on this disc, and I wasn't expecting much considering the description and my lukewarm reaction to previous Neame films like “The Horse's Mouth” (1958), but I was knocked over by how much I enjoyed this movie. It reminds me a bit of one my favorite '70s films, “Thunderbolt and Lightfoot” (1974), with its relaxed approach to narrative and its wry sense of borderline-absurdist humor. I understand that some look down on “Hopscotch” as a “lesser” entry in the Criterion Collection. I'm here to tell you that's nonsense. “Hopscotch” is an absolute blast.

Posted by Christopher Long at 1:18 PM