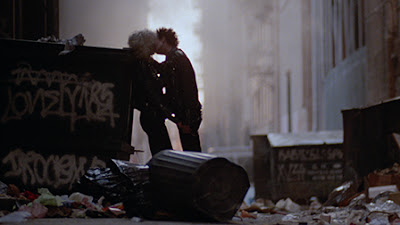 
As a portrait of the London punk scene circa 1977, Alex Cox's “Sid and Nancy” (1986) relies on its fair share of shortcuts and cliches. Watch the scary punk smash his head against the wall! See him spray paint graffiti all over some poor sod's apartment! Yet as the film progresses, the carnivalesque caricatures resolve into more fully-fleshed personalities, and as the film's other elements drop off one by one, leaving the two title characters alone in their tiny pocket universe, it achieves a tragic resonance.

The loud-mouthed, heavily pierced punk rockers and various hangers on seldom appear to be having much fun, motivated primarily by a need to alleviate the boredom of (non)working-class life in mid-'70s England. This is hardly a romanticized vision of an angry outsider movement: the fans pay more attention to their faux-rebellious fashion statements and Sid's bandmate Johnny Rotten/Lydon (Andrew Schofield) contributes to the scene mostly by belching and farting. Under Nancy's expert tutelage, Sid becomes vastly more concerned with his next drug hit than with the band though, to be fair, he was never exactly big on practice in the first place.

After a few stumbles in London, “Sid and Nancy” picks up considerably when the action shifts to America for the band's failed tour which would see them break up before its completion. If Sid was never the most devoted bandmate, he suffers considerably when cut adrift from the Sex Pistols, now with the directionless Nancy as his only rudder. Thelovers settle into a grubby room at the Chelsea Hotel where only their drug dealers any attention to them as they pass an indeterminate number of blurry days by shooting up and passing out, too impotent and pathetic even to achieve Nancy's stated goal of going out in a blaze of glory. 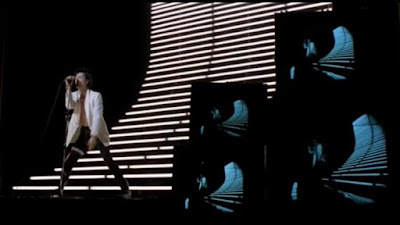 I admit to finding Chloe Webb's abrasive caterwauling an irritation at times, but the limited archival footage suggests she was embracing the real Nancy with admirable gusto, and there's no denying the relentless ferocity she brings to the role. Pale, skinny Oldman, in his first significant film role, snarls and mumbles his way through an intensely physical performance; the semi-coherent, largely-inarticulate Sid looks ready to collapse at any moment, but somehow keeps powering through to the next day on a mix of spite and apathy. And heroin.

Cox is unflinching in his portrayal of Sid and Nancy's last-days degeneracy, a sticking point for some punk historians and fans as well as a few critics who found it exploitative. Cox and co-writer Abbe Wool certainly have no interest in depicting Sid and Nancy as star-crossed Shakespearean lovers, or as the romantic embodiment of the true punk ideal, but I think they still sympathize with them even at their most pathetic.

Amidst all the cramped, sparsely-lit bedrooms and dive bars (cinematographer Roger Deakins works wonders in dim, claustrophobic spaces), Sid gets one glamorous fantasy sequence. Stumbling down a set of neon-lit stairs that lead to nowhere, he spits out his own obscenity-laden version of “My Way,” a show-stopping scene that somehow remains poignant even after it erupts in gunfire. 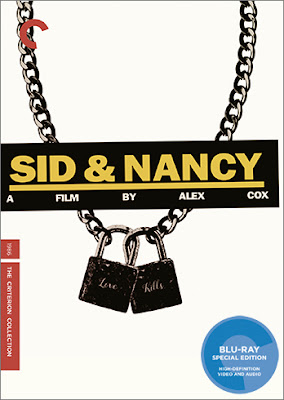 Video:
The film is presented in its original 1.85:1 aspect ratio. This new “16-bit 4k digital transfer” is virtually flawless, with sharp image detail and a vibrant color palette. It's so strong, I have little to say.

Audio:
The disc offers both linear PCM mono and DTS-HD Master 5.1 surround options. The film isn't quite as heavy on punk music as some fans might prefer (OK, as I might prefer) but in addition to a few Sex Pistols tracks, Joe Strummer provides multiple contributions to the film's score (with fake credits obscuring exactly what he did). Both audio options are crisp and distortion-free, as you would expect from Criterion. Optional English subtitles support the English audio, and might be needed when Oldman embodies Sid at his least articulate.

Extras:
Criterion has packed this Blu-ray release with an overwhelming collection of features, both old and new.

The disc also includes excerpts (14 min.) from Danny Garcia's 2016 documentary, “Sad Vacation: The Last Days of Sid and Nancy.” We also get excerpts (10 min.) from Lech Kowalski's 1980 documentary on the Sex Pistols, “D.O.A.: A Right Of Passage.” The former combines interviews with many commentators. The latter consists mostly of footage of the real Sid and Nancy laying about, Sid stoned out of his mind and wearing a t-shirt with a swastika emblazoned on it.

The rest of the features are all archival material. We get audio of a phone call (13 min.) between Vicious and photographer Roberta Bayley, placed on Jan 19, 1978, a few days after he was hospitalized for a drug overdose on a plane.

In a brief excerpt (3 min.) from the Dec 1, 1976 episode of the British show “Today,” the smug host Bill Grundy outright mocks his guests, The Sex Pistols, and can barely tolerate what he sees as their pathetic, insincere act. The chaotic appearance helped boost their profile considerably.

We also get an excerpt (13 min.) from the Nov 28, 1976 episode of “The London Weekend Show” in which journalist Janet Street-Porter takes a look at the music and fashion of the London punk scene.

The final feature is a Theatrical Trailer (2 min.)

The insert booklet includes an essay by author Jon Savage and a compilation of some research conducted for the film by Alex Cox.

Final Thoughts:
I think “Sid and Nancy” is much more successful in its American scenes than its London ones, but perhaps that's because the most moving parts of the story involve Sid and Nancy in total isolation. With its exceptional transfer and a bounty of supplemental features, this Criterion release should provide fans everything they could ever wanted from a “Sid and Nancy” disc.
Posted by Christopher Long at 9:33 PM