Only one pick this time. Have to maintain a little suspense. Plus I run a bit longer than usual here because I have a lot to say about this particular movie.

Here's a link to the previous installment. 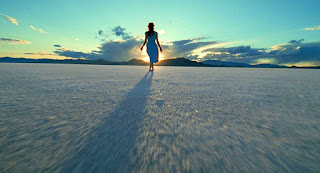 When Terrence Malick's “The Tree Of Life” was released, it met with general critical acclaim as well as a small but vocal skeptical contingent that presaged the withering criticism Malick would draw through much of the rest of the 2010s. He would find himself increasingly charged with pretentious navel-gazing and an exasperating lack of interest in coherent narrative (this is a bad thing?). He became the butt of endless jokes about all the twirling and the fields of wheat and perfume ads, and other snide shots from viewers not capable of doing much more than binge-watching cooking shows on Netflix.

Malick is easily my favorite American filmmaker of the 2010s. I would also have included his critically lambasted “To The Wonder” (2012) on my Top 20 list had I not arbitrarily decided to limit myself to only one film per director. I still think about “Knight Of Cups” (2015) all the time. OK, fine, “Song To Song” (2017) wasn't quite as good – it was still great. And, oh yeah, “A Hidden Life” is one of the best films of 2019, one hell of a year for cinema.

Anyway, the end of the 2010s finds “The Tree Of Life” near the top of many best-of lists, perhaps the consensus pick for best film of the past ten years, if a consensus pick is actually possible. Far be it from me to argue.

Following is an edited version of my original review, written at a time when I was really excited about the movie. Come to think it, I'm still just as excited.

The newest chapter in the book of Malick-eye leaves viewers unable to agree on precisely what they have seen. I don’t mean that the film is divisive, but rather that it can be difficult to process its richly textured imagery after a single viewing, or even after several. Emmanuel Lubezki’s gliding hand-held camera and the kinetic editing construct a landscape out of impressionistic sense memories, flurries of shapes, movements, faces, bodies moving towards or away from the camera. Traditional perspective is skewed, context isn’t always clear, and the sheer volume of images can overwhelm the senses. Add in the film’s tendency to traverse multiple time frames ranging from the beginning of the universe to 1950s Texas to the final days of our solar system and even the most attentive viewer will ask, “What did I just see?” Is that mom greeting her son as he rises from his grave at the end of the world? Did I really see Sean Penn smile at the end?

And what about God? Does this film which depicts the creation of the universe also show us its creator? “The Tree Of Life” begins and ends with a flickering ring of light, perhaps a flame or a cloud of interstellar gas that could, like many circular or oval shapes, be taken for an eye. Is this the eye of our creator looking at us? The film offers one hint. The third (I think) cut to this image is synched to the word “Lord” whispered (lots of whispering voiceover here) by the grieving mother in the film. But this is hardly definitive. She could simply be projecting. Maybe this ring of light is just… a ring of light. And if it is a creator eye, does it see like we do? Or is it so alien we can’t even conceptualize its perspective?

God or not, “The Tree Of Life” is suffused with a sense of wonder, the wonder of How. How did we get here? In his book “Wonderful Life,” Stephen Jay Gould marvels over the diversity of life during the Cambrian explosion and notes (somewhat controversially) that the extant fossil record shows us a myriad of possible ways evolution could have occurred. The route that led to the emergence of homo sapiens and of consciousness was so staggeringly unlikely it seems difficult to attribute it to chance, and yet, if it had happened any other way, we wouldn’t be here to ask, “How did it happen this way?” But we are here, and so we ask the question and we keep asking it, whether we expect to get an answer while communing with the beyond or by studying the contents of a Petri dish.

“The Tree Of Life” deals with these heady matters in the grandest fashion, but it is primarily motivated by a more specific kind of “How.” The film opens with a mother (Jessica Chastain) receiving a telegram, the kind of telegram no mother wanted to receive in the 1960s. Her 19-year-old son is dead (most likely in the war, but we aren’t told) and her grief is so vast she must reach back to the dawn of time to ask “How could you let this happen?” and “Where were you?” Similarly deep is the grief of eldest son Jack O’Brien, depicted as an adult (sometime around our present day) by Sean Penn who looks as morose as Sean Penn usually does. At least on this (present) day, Jack is consumed by thoughts of his long-lost brother, and much of the film is loosely structured around his childhood reminiscences. Flash back to 1950s Waco, TX where young Jack (Hunter McCracken) and his little brother (Laramie Eppler) are both still alive and playing, and vile telegrams are a decade away. Then wait a few minutes and flash back to the Big Bang. It’s not as long a trip as you think.

As dense and convoluted as the film’s visuals can be, the epoch-leaping narrative of “The Tree Of Life” is fairly straightforward. Writer-director Malick, making his usual liberal use of voice-over, lays out his thesis as bluntly as possible. Mom states that you have to choose either the way of nature or the way of grace. Grace equals mom, and nature equals Jack’s father (Brad Pitt) who subscribes to a dog-eat-dog view of humanity tinged by disappointment at his failure to become a “big man.” Father says,“Your mother’s naive. It takes fierce will to get ahead in this world, son.” Jack has a tough choice to make.

“The Tree of Life” is not particularly subtle in this fashion, but subtlety is not inherently a virtue. After establishing the high stakes (a family grieving over the loss of a son), Malick ups the ante even more by cutting from rural Texas to the cosmos shortly after the Big Bang. In an elaborate special effects sequence that draws obvious and valid comparisons to Kubrick’s “2001: A Space Odyssey” (Douglas Trumbull provided visual effects for both films, working here along with Dan Glass of “Matrix Reloaded”), nebulae expand, galaxies race away from each other, the Earth forms, volcanoes erupt, the planet cools to a point where multi-cellular life emerges, thrives, and then is almost wiped out by a meteor strike. And yes, as you may have heard, there are dinosaurs.

This section of the film is spell-binding (and also the make or break point for potential walk-outs) but what follows is even more extraordinary, one of the most extraordinary things I’ve ever seen in on a screen. After showing us the origin of life, Malick shows the origin of a life, that of Jack who is depicted living in an underwater house (the womb) before swimming to the surface to be born (Is that mom swimming alongside him? It’s hard to see…) Here “The Tree Of Life” fully reveals its epistemological concerns. Baby Jack is trained to see (he is gobstruck by the sight of mom’s distorted hand in a water-filled fishbowl) and to hear, how to speak and read, learning the “proper” way to make meaning of a chaotic pre-linguistic sensory field. He learns the concepts of “No!” and “Mine!” which can be traumatic enough, but under his mother’s care (the way of grace) the lessons are gentle. He is soon, however, handed off to father (“Don’t call me dad.”) who immediately begins to teach him about borders (“Do not cross this line!”), etiquette, and, most importantly, exactly who’s in charge. A life from the womb to the brink of adolescence condensed into a series of primal scenes, and rhymed directly with creation itself, each equally important, each flowing in the same river. Call it bold or call it pretentious, but there’s no denying Malick’s chutzpah or his virtuousity. I am left gaping.

The film mourns the loss of innocence, not just the loss of childhood and family, but also the loss of an innocence of perception. The defining tension of the childhood scenes (most of the film’s lengthy middle section) is Jack’s resistance to his father’s lessons. He doesn’t blindly accept all the “Shit My Dad Says” and turns initially to God for wisdom: “I want to know what you are… I want to see what you see.” Not the way father (with a little f, although he acts like he’s a big F) sees. If adult Jack is still disillusioned, perhaps it’s because these requests were never fulfilled, at least not to his satisfaction. How? Why? The very need to ask is the inevitable burden of acquired language. As Kaspar Hauser said, “It seems to me that my coming into this world was a terrible fall” or, perhaps more relevant here, “Mother, I am so far away from everything.”

Though cosmic in scope, Jack’s reminiscence in “The Tree Of Life” is narrowly focused. To the best of my recollection, there are no traditional pop culture markers, no signs of film, television, or radio, as we would expect in a more nostalgic reverie. Everything is centered around the family and particularly the home, a theme most vividly manifested in a shot of the house high on a hill (a hill we have not, I believe, seen before), an ocean of clouds wafting above, as if it was the only house in the universe. As well it might be.

Jack’s lonelyache, whether embodied by Sean Penn’s trademarked grief-face or Hunter McCracken’s stolid rebel, is fueled by desire: for God, for meaning, for his lost brother, for rapprochement with his father and, above all, for his mother. Chastain, so often limned in the light of a sunset, is the archetypal figure of a pure, perfect mother, young and beautiful and all-forgiving. She is a precious memory, no doubt inaccurate, jealously guarded by Jack (at all ages) against any erasure or deformation. Yet she is still elusive, always there but just out of reach, often receding from the camera with a laugh and a billowing dress. I have seen these same images in my dreams many times, and it is startling to see them created by someone else. “Tree of Life” evokes the defining presence and absence of mother more vividly than any other film I know.

Noël Carroll once described the sights and events in Malick’s films as “too much there,” a reference to a sense of immediacy and force that goes beyond language, narrative and psychology, the unmediated and inherently alien experience they provide. I would describe the pictures and moments in “The Tree Of Life” as being “too much now.” The elemental raw-scrape of the photography and the film’s unique editing style present each image as fresh and as monumentally important as any other: the Horsehead nebula, a lace curtain, an eclipse, a nightlight, the cosmic and the domestic woven together. We are always at the center of our universe and even though each cut in the film can span millions of years or a fraction of a second, everything we see and hear is always now, always everything.
Posted by Christopher Long at 10:31 AM