Until The End Of The World 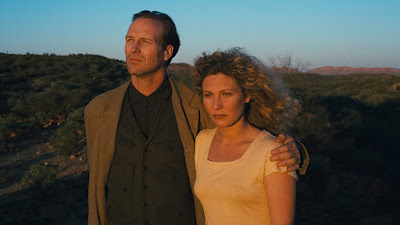 
You might not expect a nearly five-hour movie ostensibly about the end of the world to be so playful, but director Wim Wenders sure seems to be having fun.

In “Until The End Of The World” (1991), Wenders and co-screenwriter Peter Carey take particular pleasure in mashing genres together and then dismantling the conventions of each of them. In most movies that open with a nuclear satellite crashing to earth, the possible extinction of the human race would loom rather large as a plot point, but it's mostly pushed to the background here as the film's characters have greater concerns, such as finding love and listening to good music. Once the international espionage thread kicks in, the film introduces the expected array of menacing tough guys from bank robbers to a hard-boiled detective, only to reveal that they're all softies at heart and maybe what they really want most is to meet new friends and have a good time. That's not to say there's nothing at stake in the story, rather that the film suggests that personal needs are paramount, transcending even the apocalypse.

Claire (Solveig Dommartin) stumbles out of a boozy, somnambulant party in Venice and onto a gondola that launches the first leg of a globetrotting journey that will take her to Paris, Lisbon, San Francisco, Moscow, Beijing, Tokyo, and Australia in her search for... something. She doesn't realize what that something is until it arrives in the form of Sam Farber (William Hurt), another world traveler and also a fugitive hounded by the U.S. government for stealing secret technology. As complications pile up, many characters wind up pursuing each other all around the world, though most of them are men in pursuit of the elusive Claire, most notably her ex-boyfriend Eugene (Sam Neill), a novelist who also serves as the film's narrator.

Claire falls in love with Sam, perhaps because she sees in him a better version of herself to which she aspires, a wanderer with a clear mission. Sam has stolen, or perhaps reclaimed, a camera that can process images so that they can be “seen” by the blind, including Sam's mother (Jeanne Moreau) who lives with Sam's scientist father (Max Von Sydow) in the Australian Outback where most of the film's many characters eventually wind up. Oh, by the way, the nuclear satellite explodes and destroys the world (or maybe not) after which everyone gets together to perform a few great songs under the wide-open Australian skies. The music itself may be the true purpose of their long and dangerous journey.

Wenders set his film about ten years in the future and correctly predicted that much of the world would mistake Dec 31, 1999 for the last day of the millennium (stop arguing– there was no 0 A.D). He and his design team also accurately envisaged a world where cars would navigate by GPS systems, information would be accessed through search engines, and people would stare obsessively at images on their tiny handheld devices. These speculations weren't unique to Wenders and some were extrapolations of 1990 trends, but they make the film seem cannily prescient now that its future world is our present and recent past.

Wenders also took the unusual step of writing to twenty of his favorite musicians to ask them to work on his film and, in so doing, to project their own music about ten years into the future. To his surprise, virtually everyone responded with interest, and the soundtrack is densely packed with hits from the likes of Nick Cave and the Bad Seeds, Talking Heads, Elvis Costello, Patti Smith, U2, R.E.M., Neneh Cherry, and many more.

The soundtrack album would prove to be a hit, but the film itself was a legendary flop on its initial release. Working with a then-massive budget of $24 million (some of which paid for shooting on Super 35 mm film), Wenders was pressured to lop his “ultimate road movie” down to a “mere” two-and-a-half hours for what he now refers to as the Reader's Digest version of the movie, one that lacked the humor, music, and rhythm he felt was essential to its structure. Wenders kept all the material needed to eventually release his intended 287-minute cut, a version which brought widespread praise from critics, completing a familiar journey from film maudit to beloved masterpiece (cf. “Heaven's Gate”).

The film's final act (roughly the last fifty minutes) strikes a more somber note than much of the rest of the film, and seems to me like its least successful stretch. Wenders has mentioned that the film was inspired in part by his concerns over a culture moving (circa 1990) from one based primarily on words to one centered on images. Eugene, as narrator, may fret about “the disease of images” as both Claire and Sam become increasingly addicted to watching their own digitized dreams play out on little screens, but “Until The End Of The World” is also an exuberant celebration of cinema, replete with overt references to the works of directors like Godard and Ozu, and populated with a superstar cast of art-house icons including Von Sydow, Moreau, Chishu Ryu, Kuniko Miyake, and David Gulpilil. If our culture is really bidding goodbye to language (a dubious claim) I don't think the film really posits this as either a disease or the apocalypse, but simply as a change that may generate both anxiety and exciting new opportunities. 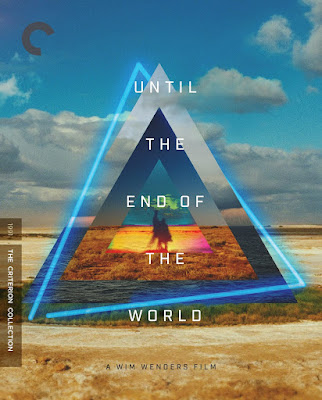 Video:
The film is presented in its original 1.66:1 aspect ratio. From the Criterion booklet: “Supervised by Wim Wenders and produced by the Wim Wenders Foundation, this digital transfer was created in 4K resolution on an ARRISCAN film scanner, from the Super 35 mm original camera negative at ARRI Film & TV Services in Berlin, where this film was also restored.”

I don't own any other version of this film on DVD or Blu-ray as a comparison point, but this 1080p transfer from Criterion looks fabulous, with sharp image resolution throughout and a rich color palette. Breaking the film up onto two Blu-rays has enabled Criterion to provide a high bitrate transfer that should please any viewer.

Audio:
The DTS-HD Master Audio 5.1 track was “remastered from the original 35 mm magnetic tracks the Wim Wenders Foundation and approved by the director.” It's robust and distortion-free and provides a fine presentation of the film's jam-packed soundtrack. Optional English SDH subtitles support the audio.

Extras:
The 287-minute film is broken into two parts over two separate Blu-ray discs. Extras are also spread out across both discs.

Most of the extras included on this 2-disc set are older features. However, the collection kicks off with a new interview (2019, 15 min.) with filmmaker Wim Wenders, whose discussion focuses mostly on the film's soundtrack. He shares his well-known obsession with music and talks about how he wrote letters to twenty of his favorite performers, asking them to contribute to the soundtrack of “Until The End Of The World.” Almost all of them did so. This feature also includes a separate interview (2019, 8 min.) with both Wenders and David Byrne.

We also get “The Song” (18 min.), a 1991 documentary by Uli M. Schueppel which follows the recording session for Nick Cave and the Bad Seeds' “(I'll Love You) Till The End Of The World.” It's a pretty typical studio recording doc, mostly of interest to Nick Cave fans.

Disc One also offers a collection of Deleted Scenes and Alternative Takes (31 min.), most scored to music from the film.

In a 2001 interview (31 min.) conducted by journalist Roger Willemsen, Wenders discusses the long gestation of the project, which began during his extended stay in Australian in 1977 when he fell in love with Aboriginal art and culture. He was also influenced by American plans for weaponizing space. He also talks about his frustrations with the truncated Reader's Digest version of the film he felt forced to release, and which flopped badly.

“Wim Wenders in Tokyo” (1990, 62 min.) documents the special-effects work (conducted in Tokyo) for the the high-definition video scenes featured in the film. It's interesting, but feels stretched out at an hour-long running time.

“Up-Down Under Roma” (1993, 6 min.) is a short interview with Wenders. Riding in the back of a traveling car, Wenders talks about his fondness for Australian Aboriginal culture.

The features wrap up with a Theatrical Trailer (2 min.)

The 32-page insert booklet features an essay by critic Bilge Ebiri and an essay about the film's popular soundtrack by critic Ignatiy Vishnevetsky.

Final Thoughts:
I can't agree with the critical cohort who has branded the full-length version of “Until The End Of The World” as a masterpiece, but Wenders' original vision is one of both great ambition and great charm. Not to mention great music. Criterion's two-disc Blu-ray release provides a strong high-def transfer and a wide array of extras that give the film the loving presentation it deserves after being treated so poorly on its initial, butchered release.
Posted by Christopher Long at 12:06 PM