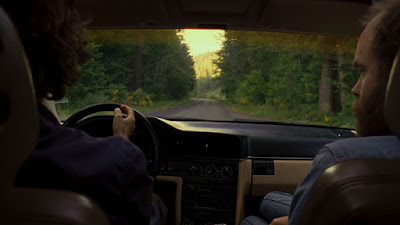 
Call it minimalist or a marvel of economic storytelling, screenwriter/editor/director Kelly Reichardt's celebrated “Old Joy” (2006) doesn't sound like much on paper. Two old friends reconnect and go for a hike to a hot springs bath in the woods outside Portland, OR. They chat along the way, though sometimes they go long stretches without saying much. They bring a dog with them. That's about it. The film runs just 73 minutes, and about twenty percent of the screen time is devoted largely to long, slow shots of the roadway rolling by as they drive further from the city.

So why was “Old Joy” greeted with hosannas from many critics, and hailed by some as a reinvigoration of American independent cinema? In part, “Old Joy” felt like an outlier in an increasingly commercialized and formulaic indie world populated with big-name stars competing to see who could act quirkiest. It was a true DIY micro-budget passion project filmed by a small, resourceful crew, the indie model of “Stranger Than Paradise” rather than “Little Miss Sunshine.”

In addition, “Old Joy” marked the emergence of a distinct artistic voice in the form of Kelly Reichardt. Actually, it was a re-emergence since Reichardt had already earned plaudits for her debut feature, “River Of Grass” in 1994, but she struggled to secure funding for a follow up. She continued making short films, but didn't draw much attention on the festival circuit over the ensuing twelve years.

“Old Joy” showcases a filmmaker working with the supreme confidence of a veteran, never tempted to rush simply to advance the narrative and in command of the subtlest shifts of tone. Adapting a short story by Jonathan Raymond, Reichardt conveys volumes of information with just a handful of shots. Mark (Daniel London) is introduced to the sound of a tinny bell he uses to facilitate his meditation in his comfortable backyard. The peaceful noises of this outdoor space are shattered in a jarring sound edit by the loud churning of a blender operated in the kitchen by Mark's pregnant wife Tania (Tanya Smith). Is that wheatgrass juice or just a suspiciously green smoothie? We're definitely in the land of coastal liberals.

Mark gets a call from his old friend Kurt (singer-songwriter Will Oldham) who invites him for a hiking trip to these totally awesome hot springs he knows about. Mark makes a passive-aggressive offer for Tania to join them, knowing full well his pregnant wife won't accept but heading off any potential argument, and escapes for his dudes-only trip. Well, dudes plus his faithful dog Lucy, the only female who'd want to come along for the ride.

The schlubby Kurt arrives late for their meeting and instantly coded as the arrested man-child, weirdly hauling a used TV behind him in a wheelbarrow. They're delighted to see each other, but divisions quickly become apparent. Kurt stops to score some weed, but Mark doesn't smoke. When Kurt mentions their old buddy Yogi, Mark remembers him as the guy that stiffed them on the rent. Kurt totally forgot about that, and just associates ol' Yogi with parties and good times.

Both leads are wonderful, though Oldham gets the juicier role. The more strait-laced Mark listens as Kurt, sometimes high on pot and sometimes high on just being Kurt, delivers his stoner science lecture (the universe is a falling teardrop...) or relates a rambling anecdote about almost running into an old man with his bike. Once they finally get to the baths, after Kurt gets them lost numerous times, they relax for a while, but an awkward encounter suggests there is no return to Eden. A close-up shot of Mark's hand, wedding ring prominent, dipping under the water is both ambiguous and evocative, and a perfect example of Reichardt's ability to reveal depths through deceptively simple details.

Nature often takes center stage. The very first image of the film is a chirping bird hopping in the gutter along Mark's roof – bird calls feature prominently on the soundtrack. Swarming ants, a scurrying spider, a lazing slug and, of course, the free-roving Lucy, often clutching a giant stick, ground our characters firmly as products of their environment. No doubt these images tugged on the heartstrings of many a city-dwelling festival attendee, only adding to the film's allure. 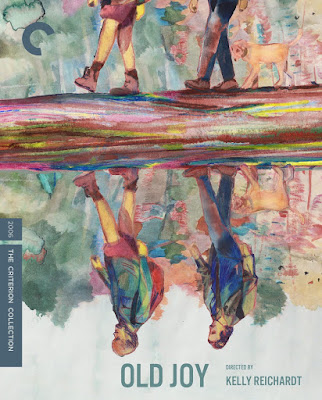 Video:
The film is presented in a 1.78:1 aspect ratio and from a new 2K digital transfer. The film was shot on Super 16 mm but this transfer was sourced from a 35 mm digital negative made during the film's production. The 1080p transfer looks sharp with a natural color palette, basically the high quality we expect from Criterion.

Extras:
Kino released “Old Joy” on DVD many years ago with a feature-length commentary track by Reichardt, cinematographer Peter Sillen, and filmmaker Michael Almereyda. Unfortunately, that commentary track has not been imported to Criterion's Blu-ray release. However, Criterion has included an array of new interviews.

First is an interview with Reichardt (2019, 19 min.) in which she discusses the film's origins, her fondness for Jonathan Raymond's writing, and, of course, her dog Lucy.

We also get a discussion between the lead actors, London and Oldham, which runs 23 minutes.

The insert booklet includes an essay by film critic Ed Halter and a reprint of the Raymond short story from which the film was adapted.

Final Thoughts:
“Old Joy” yielded a new generation of Kelly Reichardt fans, and they wouldn't have to wait twelve years for their next fix. In the twelve years since, Reichardt has directed three of the greatest American films of the 21st century in “Wendy and Lucy” (2008), “Meek's Cutoff' (2010), and “Certain Women” (2016). For viewers who jumped on with “Wendy and Lucy”, this Criterion release provides a great opportunity to catch up with one of Reichardt's best.
Posted by Christopher Long at 11:34 AM