We've entered the portion of my list where I think each film could have made my top slot. It doesn't matter, but you already knew that. Today, I bring you two films by quite possible the two greatest European directors of the past half-century, which I figure is a decent place to start.

Here's a link to Part Six, in case you're curious. 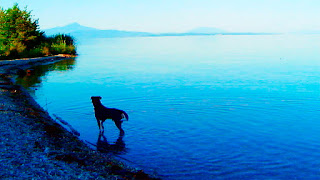 No filmmaker has declared cinema to be dead more often and with more schadenfreude than Jean-Luc Godard. With the help of a half-dozen digital cameras shooting at multiple frame rates, Godard proved with “Goodbye To language 3D” that his multiple eulogies for the medium were, as we always suspected, complete bullshit.

I was certainly jolted out of my film festival ennui after I trudged through a rainy, chilly evening to a dreary theater and slipped on my 3D glasses to watch the adventures of Roxy the dog and some humans I only vaguely remember. Tthere's an unhappy couple or maybe two of them – someone gets killed, I think. The story hardly matters. Godard distorts the 2D image almost beyond recognition and then severs the 3D field to present stereoscopic thrills to delight even the most jaded viewer. Close your left eye and you see one movie, close your right eye and you see another one. And now they're both united again. My God, movies really can still be magic!

Godard understands that the optimal use of 3D is not a futile effort to draw viewers deeper into the illusory world of a seamless narrative, but to make them conscious every second of the act of seeing (comparisons to Stan Brakhage are obvious, but overblown). Look what images cinema can bring to you. Really look, and savor the sensual experience for its own sake, not because it can whisk you like a tourist through the museum of a narrative. And let every discontinuity, every abrupt rupture (augmented by the typically jarring JLG soundtrack) jolt you out of your complacency and make you feel alert and alive the whole time. Forgive my histrionics, but this movie really did inspire an excitement about the medium I hadn't felt since the first time I watched “Last Year At Marienbad” many years ago and thought, “Woah, I didn't realize movies could do that.”

Godard's relentless experimentation with image and the unstable (and untrustworthy) relationship between image and sound has always excited me, but I can't deny that he can be tiresomely pedantic at times and that his movies require a lot of work to decipher.“Goodbye To Language 3D”, however, proves that a JLG movie can simply be a total blast to watch.

Of course, you probably won't ever get to watch it. A 2D version exists and is readily available, but I can't recommend it. The 3D isn't a luxury viewing option in this case, but the core of the project. So unless you get to see this at a 3D repertory screening (is there such a thing?) or unless you're one of the eight people in the world with a 3D HDTV, you won't get to see “Goodbye To Language 3D.” Which only makes it that much more special in the era of ubiquitous content.

When I selected “No Home Movie” as my top film of 2015, I kept my comments brief: “Chantal Akerman is gone and this deeply personal documentary will be her last movie. That's a terrible thought, but it's another great movie from one of the greatest filmmakers of all time. I'm not ready to say anything more about it except that Chantal Akerman is irreplaceable and I will always miss her.” Four years later, I'm still tempted to leave it at that, but I suppose I'm ready to say just a bit more.

Chantal Akerman began publicly documenting her relationship with her mother at least as far back as her brilliant “News From Home” (1976) which makes “No Home Movie” feel like a partial career summation for more than just the fact that it was her final movie. In an early scene, Chantal Akerman speaks with her mother Natalia in her mother's cramped Brussels apartment. Natalia's back faces the camera and her body often eclipses Chantal, seated on the other side of the table. The framing is deceptively simple and naturalistic, but evokes the challenges in getting her mother, an Auschwitz survivor, to open up about her past, and the struggle for control of the narrative. For the moment, they limit the discussion to food: potatoes are better with the skin on because that's where the vitamins are stored. You have to start with potatoes before you get to the family history and the flight from Poland and the mistaken belief that Belgium provided a safe refuge.

Like many Akerman films, the documentary features numerous frames within frames – shots through windows and doorways and also on computer screens. Chantal also speaks with her mother by Skype and when her mother asks why, the director replies: “Because I want to show you there is no distance in the world.” Mom is both touched and proud: “You always have such ideas don't you, sweetheart?... When I see you like that, I want to squeeze you in my arms!” Even four years later, I can barely write that without tearing up. In fact, I can't.

I'm relying on notes I took on my first viewing since I don't have a copy of the film right now, so forgive me if I'm paraphrasing without realizing it. I have another note that reads as follows: Chantal to mom: “I'm in a very, very good mood. Let's enjoy it. It's not that common.” And now I find that I'm still not ready to say much more. Except that “No Home Movie” features Chantal Akerman at her peak. Of course peak Akerman was also the only Akerman.
Posted by Christopher Long at 12:57 PM