In an interview included on this Criterion disc, Andre Gregory and Wallace Shawn describe Henrik Ibsen's play “The Master Builder” as fundamentally mysterious. Even developing their adaptation of the play (written by Shawn, adapted for the stage by Gregory) over fifteen-plus years of rehearsals they make no claim to have resolved its enigma; perhaps their real accomplishment is to have preserved the tantalizing mystery while updating the play for a different century and, eventually, to the medium of film.

“A Master Builder” (2014) continues the unofficial Gregory-Shawn film trilogy kicked off with the legendary “My Dinner with Andre” (1981) and continued with the much-loved “Vanya on 42nd Street” (1984). The lengthy gaps are a testament to Gregory's unique and oft-discussed process, the deliberate, gradual sculpting of performance over years of periodic rehearsals with only the most minimal and gentle feedback from a director celebrated by actors for his non-judgmental mentoring. The younger members of the cast didn't join the troupe until later in the process, a necessity considering some weren't yet in kindergarten when rehearsals began.

The play was then staged exclusively for tiny audiences of invited friends and family, an intimate process from start to finish. Director Jonathan Demme attended one of the final performances and was so spellbound that he was eager to sign on for the film adaptation, accepting the daunting task of filling the shoes of the great Louis Malle, who helmed the two previous Gregory-Shawn joints.

In Shawn's re-working of Ibsen, Halvard Solness (also played by Shawn) is a renowned architect fond of erecting towering spires but now laid low by infirmity. Attended by a group of wispy white-clad nurses, he entertains visitors from a hospital bed situated in his living room, hooked up to monitors that beep out the remaining seconds of his life. The insistently vocal reminder of his mortality has made only a dent in an ego that towers above any of his celebrated structures. Asked by an old friend (Gregory) to perform a modest act of kindness and sacrifice to benefit the friend's son (Jeff Biehl) who is also the Master Builder's much-abused assistant, Solness rejects the request indignantly; he has no intention to “step aside” to make way for the younger generation. Let the young man fend for himself, he isn't that talented anyway.

In due course, the film introduces the other major players in what is left of Solness's life, including his (justifiably) paranoid wife Aline (Julie Hagerty), his doting assistant and possible lover Kaia (Emily Cass McDonald), and his skeptical but devoted doctor (Larry Pine). Solness has extracted everything he can from his ample support crew over many years (he even believes he has a mystical power to make people follow his unspoken desires) but it's still not enough to serve his needs.

It's quite an entrance. Striding into the house seemingly out of nowhere, the 22-year-old makes an immediate impression decked out in her white short shorts. Saucer-eyed, gulping down cubic acres of air and blowing it back out through flared nostrils, Hilde is portrayed by Lisa Joyce as constantly perched on the edge of hysteria, oscillating through a series of cathartic releases that range from manic laughter to wide-eyed wonder to even more manic laughter. 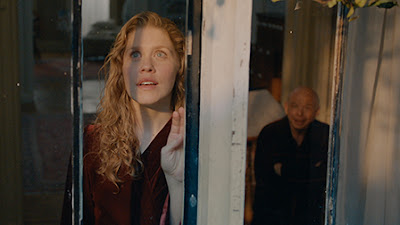 Hilde is the source of much of the film's mystery. In Shawn's adaptation, she appears in the midst of what is most likely Solness's deathbed delirium (the film's aspect ratio expands from 1.78:1 to 2.35:1 wen Halvard suddenly hops up from his bed and moves freely about the house), but she could just as easily be an angel as a manifestation of the title character's faltering psyche. And just as much avenging succubus as angel. Hilde alternates from accusing Halvard of terrible crimes to turning all her considerable hyperventilating energy to boosting his flagging spirits. She both condemns and rehabilitates the man whom she refers to solemnly as Master Builder, often in the same beat. To what precise purpose, well, I guess that's a mystery.

Demme and cinematographer Declan Quinn (who also photographed “Vanya”) shoot the film primarily in hand-held close-ups with the occasional re-orienting zoom, resembling the style popularized in “Homicide: Life on the Street.” It is indisputably filmed theater that is tightly confined to Solness's vast home (aside from a few tracking shots through town, pointed straight up at the sky and the highest steeples in the area) but also quite energetic, perhaps too jarringly so for the more static, talky material.

The performances here are mostly quite stage-intense though nobody else approaches Joyce's level of sustained frenzy; tightly wound and unwound Julie Hagerty comes closest. I admit to a general distaste for such a frenetic style though I respect the effort required to sustain such ferocity. I must confess I also don't quite get the point of the story. This imperious wretch has drained the life from multiple generations of unfortunates who have fallen under his possibly supernatural force of will and so he is visited by a hot young woman who strokes both his hand and his ego... and then what? If it's all just Solness's dying delusion, is he confronting his many shortcomings or merely constructing Hilde as a means of justifying and then avoiding them in his final moments?

If even experts like Gregory and Shawn consider Ibsen's play to be inherently mysterious then perhaps it should end with a question like most good art does. I am certainly not troubled by not fully understanding the magnificent “Last Year At Marienbad” even after a dozen viewings. If I'm left unsatisfied by this story perhaps it's best that I simply admit I am not much of a theater aficionado and certainly am not familiar with Ibsen's work. If you're more of theater buff than I am, “A Master Builder” will probably be right up your alley, and it is, after all, a Gregory-Shawn production which makes it something special right from the get go. 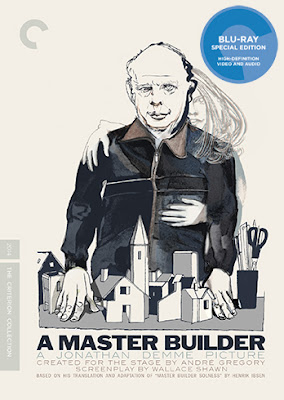 Video:
The film is presented in its original aspect ratios of 1.78:1 and 2.35:1. The film was shot in 2K digital and the smooth, grain-free look has been represented faithfully in this high-def transfer. As you would expect, the image quality is sharp and basically flawless.

Audio:
The DTS-HD Master Audio 5.1 surround track is crisp and distortion-free with a subtle sense of depth. The quiet, unobtrusive musical track sounds good though it's so darn quiet you might not realize you're actually hearing music at times. Optional English SDH subtitles support the English audio.

Extras:
Criterion has included approximately two hours of extras on this Blu-ray release.

“The Ibsen Project” (2015, 34 min.) is a conversation conducted by critic David Edelstein with Gregory, Shawn, and Demme. The first two do most of the talking with some discussion of their collaborative methods; replicating their roles from “My Dinner with Andre” Shawn is the more rational one while Gregoy acknowledges, “I don't trust the mind” at least in regards to developing a performance.

“Over Time” (2015, 53 min.) is a lengthy interview with Shawn and Gregory conducted by author Fran Lebowitz. They speak in great detail about their working relationship and many other subjects.

The disc also includes a brief Trailer for the film.

Final Thoughts:
Criterion has released “A Master Builder” on Blu-ray and DVD as an individual title with Spine Number 762. They have also upgraded their prior DVD release of “My Dinner With Andre” with a new Blu-ray version. “Vanya” was already released on Blu-ray in 2012. For die-hard fans who haven't bought any of the titles yet, Criterion has also included all three films in the new boxed set “Andre Gregory and Wallace Shawn: 3 Films” which is available in a 3-disc Blu-ray version and a 5-disc DVD version. 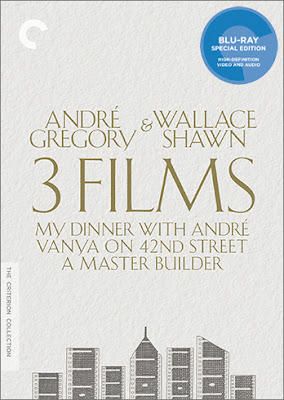 Posted by Christopher Long at 11:29 PM