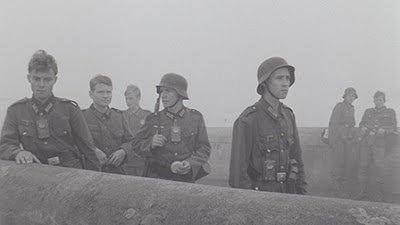 
After all of one day of basic training, a group of impossibly fresh-faced German teenagers is rushed out into the field, assigned to defend their hometown bridge against the advancing Allied forces. When fighting breaks out, the kids (the oldest is barely sixteen) are both terrified and excited, stoked up on just enough nationalistic propaganda to dream of glory, but matured enough by wartime suffering to know that death is not an abstraction. They shoot wildly, celebrate every small victory like they'd just scored a goal, and somehow find a way to stand their ground in a mismatched battle that pits their puny grenade launchers and malfunctioning machine guns against an American tank column.

At this point, near the end but with a few grueling sequences left that will feel like forever, “The Bridge” (1959) cuts away abruptly from this courageous stand to a nearby house where savvier veteran soldiers have wisely maintained a low profile (i.e., hidden out). An officer curses “the idiots” out there; if they had just let the Americans through, they could have blown up the bridge by now and been done with this useless target.

It's a nasty way of undermining what seems to be the only redeeming aspect of the battle, but that's really director Bernhard Wicki's entire point. This battle, like the entire war, is utterly senseless and audiences are not meant to take away any heartwarming lessons about resiliency or bravery, only to shake their heads at the utter futility and stupidity of it all.

Plenty of war films had explored such bleak territory before, Stanley Kubrick's magnificent “Paths of Glory” (1957) being the first to leap to mind, but “The Bridge” is often credited with being the first post-war German film to tackle the subject with so little sentimentality, as an indisputable anti-war film that sings no hymns of courage to the fatherland. What's surprising is that Wicki pulls off this trick without portraying anyone as an outright villain, with the possible exception of the officers who secrete themselves in bunkers and war rooms well away from the baby faces they will order to their deaths. The commandant who “trains” the children actually assigns them the insignificant task of defending an insignificant bridge because he hopes it will protect them from the worst of the action; that he is mistaken is a testament that he is playing a game with no winning moves.

Wicki was an established actor whose only previous directorial experience was on a documentary. For his narrative feature debut, he optioned the rights to a recent popular novel by Gregor Dorfmeister (using the pen name Manfred Gregor) which recounts, in condensed form, the author's experience as a sixteen-year-old conscript who was the sole survivor of a similar battle in his Bavarian home town.

Presumably, both Dorfmeister and Wicki deserve credit for the vivid sense of place and detail that makes the film feel so authentic. Removing the flashback structure of the novel, the film begins shortly before the fight where life is as normal as it can be during what everyone hopes are the final days of the war. Parents look on with fear every minute, praying that their boys, busy flirting with girls and playing in treehouses that will later become gun turrets, can hold out just a few weeks more and be spared the suffering of their fathers and older brothers. The kids, meanwhile, eagerly await the arrival of their draft notices; unfortunately their wishes are fulfilled as the German war machine has run out of spare parts. 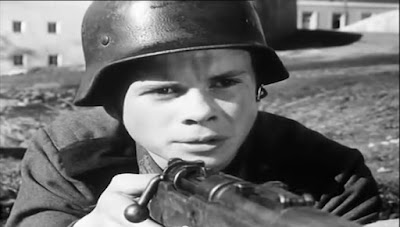 The film employs a few heavy-handed techniques, including a couple of fades that mash together some too-conveniently-matched images as clunky transitions, but mostly strikes a naturalistic tone with leisurely tracking shots that match the easy pace of childhood (even during war) eventually giving way to the more frenzied cutting of battle and its gallery of frightened young faces. The fog-shrouded bridge sequences move into more surreal territory but in the context of the insanity of teenage boys being asked to pick up guns and fire into the darkness, who's to say there's any functional difference between real and surreal.

Wicki's film was a critical and commercial success, both at home and abroad, and netted an Oscar nomination for Best Foreign Picture. It brought Wicki an opportunity to direct in Hollywood with stars such as Ingrid Bergman and Marlon Brando, but a follow-up hit proved elusive. Wicki returned to Germany and only directed a few more films, settling instead for being a larger-than-life figure (in physical stature as well as by reputation) and a mentor of sorts, more by inspiration than direct collaboration, to the directors who would comprise much of the New German Cinema and who were in desperate need of a veteran role model even while they were gleefully rejecting “papa's cinema.”

If Wicki never quite eclipsed his debut narrative feature, consider it the peril of starting near the top. 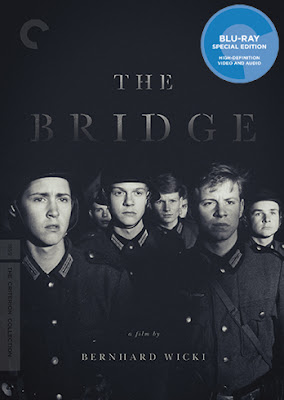 Video:
The film is presented in its original 1.37:1 aspect ratio. Shoddy clips from the “Against The Grain” extra (see below) give you a sense of just how much restoration wen into this 2K transfer. The black-and-white photography is bright though with a fairly modest level of contrast. Image sharpness is a bit below the topline Criterion high-def transfers and you'll see the occasional slight soft spot here and there, but this is a very strong transfer that handles some trickier scenes like the fog-shrouded night sequences quite well.

Audio:
The linear PCM Mono track is clean and efficient with a slightly flat sound throughout. Nothing spectacular but no flaws to speak of either. Optional English subtitles support the German audio.

A new interview with novelist Gregor Dorfmeister (2015, 23 min.) is easily the most interesting feature in this collection. Dorfmeister was still in his twenties when he published his first novel, “The Bridge.” Interviewed here at age 86 he recounts the startling autobiographical details that inspired his book. He notes that being in the Hitler Youth was fun because it was mostly about playing sports. Another of his novels was adapted as the Kirk Douglas film “Town Without Pity” (1961) but Dorfmeister focused more on his lengthy career as a journalist.

A new interview with German director Volker Schlondorff (2015, 10 min.) provides a brief appreciation of the important role both “The Bridge” and Wicki played for young German audiences and later for the New German directors of the '60s and '70s. Schlondorff describes Wicki as a kind of spiritual godfather to the NGC.

The disc also includes an excerpt (14 min.) from a 1989 episode of the German television show “Das Sonntagsgesprach” in which Wicki discusses his experiences during the war (he was interned in a concentration camp for a year and later left the country) and in making “The Bridge.”

“Against the Grain: The Film Legend of Bernhard Wicki” (9 min.) is an excerpt from a documentary by the director's widow Elisabeth Wicki-Endriss. This is the only disappointing extra on this set as about half of it consists of clips from the film.

Final Thoughts:
We don't often hear a lot about German cinema from the end of the war until the New German directors rose to prominence. “The Bridge” is one of the more prominent German films of the 1950s and has been presented with a strong transfer and some interesting, if not particularly extensive, extras on this Criterion release.
Posted by Christopher Long at 10:19 PM