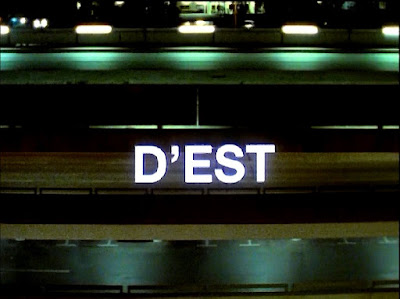 (Chantal Akerman, one of the greatest filmmakers of the past half century, turns 65 on June 6. I will be celebrating her work by re-posting an "Akerman A Day" the rest of this week.)


An empty train platform at night – a car whizzes by in the background.

A window opens out onto a country road – more cars glide past, barely glimpsed.

A man sits on a bench staring at the camera and waiting for… something.

An older woman walks along the street, the camera tracking her journey.

Tourists luxuriate on an isolated beach as an off-screen singer carries a tune.

It’s tempting to review Chantal Akerman’s “From the East” (“D’est,” 1993) by providing a catalog of its sounds and images because that’s precisely what the film is, an intimate record of what Akerman saw and heard on her trip through post-Wall Eastern Europe in the early '90s. 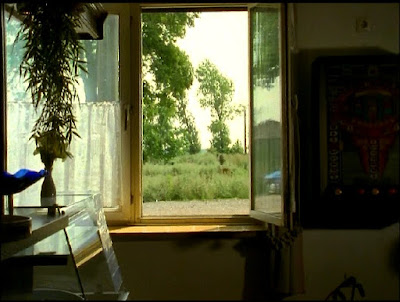 “From the East” is not a traditional documentary, not that there is any such thing. Akerman provides no voice-over, no on-screen titles to indicate place or time, no narrative through-line. Instead she (re)constructs her travelogue as a full sensory immersion into her journey through East Germany, Poland (where Akerman's parents were born), Moscow and points in-between. Ambient soundscapes are every bit as important as what the camera shows and may, at times, provide only the impression of having been recorded in synch with the image.

In an essay included with this disc, Akerman writes, “I’d like to shoot everything. Everything that moves me.” And she is moved by people, landscapes, public spaces, objects, music, movement, summer, winter, day, night and even the most banal chores, the latter of which is no surprise to anyone who has seen her magisterial “Jeanne Dielman, 23 Quai du Commerce, 1080 Bruxelles” (1975). 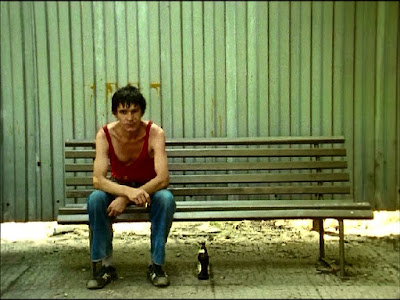 The film is an exercise in variations, a balancing act between opposite or complementary elements: interior/exterior, domestic/public, stasis/motion, noise/silence, city/rural, people/objects, crowds/individuals. In many scenes, she shoots people who are unaware of the camera, filming spontaneously as they go about their business. In other shots, individuals are carefully arranged like models as they stare at the camera. I wouldn't be surprised if some of the crowd shots were partially staged as well.


The two major motifs of the film are travel and performance. Trains, buses and cars are major players in the film, cues that remind us of Akerman’s journey. They also provide evidence of fellow travelers, people waiting (there is so much waiting in this movie) in line at the station, their route briefly intersecting hers. As for performance, most of the audible dialogue (none of which is subtitled, and shouldn’t be) comes from singers, some heard off-screen, some on. In the film’s penultimate scene, a woman (Natalia Chakhovskaia) plays cello for an enthralled audience (never seen, only heard later) and accepts congratulatory flowers. Perhaps she’s a stand-in for Akerman the performer or, more likely, another person who moves the director. 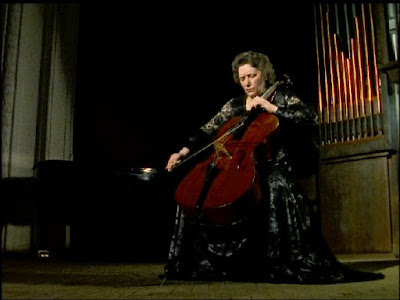 With its long, deliberately-paced shots (both stationary and tracking), “From the East” begs to be looked at and listened to (don't ignore this, Akerman has seldom been one to let sound play second fiddle to image) with great care. In this regard the film serves a “documentary” function, providing audio-visual evidence of specific times and places even if they aren’t indicated in the film. I’m sure they elicit different responses (nostalgia perhaps) from people familiar with them than they do for viewers whose life experience is exclusively “From the West.”

“From the East” is a truly beautiful film, mysterious, absorbing and mesmerizing. Not to be missed. 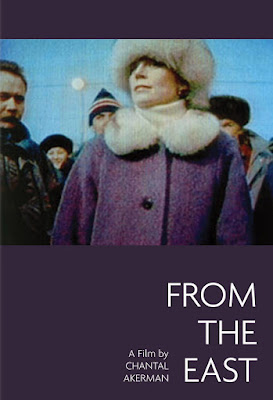 Video:
The film is presented in a 1.33:1 full-screen ratio. The interlaced transfer is not restored and it shows some of the damage from the source print, some scratches and debris but not enough to be a distraction. More problematic is a rather hazy image quality throughout, a shortcoming that is visible in the screencaps interspersed throughout this review. It would be nice to see a pristine restoration to showcase the gorgeous cinematography, but we'll take this serviceable copy of a difficult-to-find and essential film.

Audio:
The DVD is presented in Dolby Digital Stereo. No subtitles are provided even for the limited dialogue (mostly sung) that is heard in the film. They’re not supposed to be subtitled.

Extras:
There are no extras on the DVD but the liner notes include a very helpful essay/statement of purpose by Chantal Akerman.

Final Thoughts:
“From The East” is a film that defies easy categorization. It’s a documentary in the same way the Werner Herzog’s desert travelogue “Fata Morgana”(1970) is a documentary which is to say that it depends on your definition of the term. Forget categories. Let’s just say it has an ineffable quality that makes it as much an experience as a movie. “Jeanne Dielman” is indisputably Akerman’s masterpiece, but “From the East” is one of her finest achievements. Thanks to Icarus for bringing this to a home audience.
Posted by Christopher Long at 10:58 PM