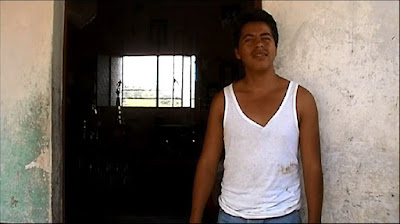 (Chantal Akerman celebrates a birthday on June 6. I'm celebrating her work with an Akerman A Day the rest of this week.)

She keeps the two distinct. In show mode, Akerman's camera glides gracefully along the dusty streets of a Mexican town, or sits implacably still as children play baseball in an open field, with only ambient sounds as accompaniment. In tell mode, the Belgian auteur turns her attention exclusively to her subjects who are framed in modest, static shots as they relate their unadorned stories about the perils of crossing the border into America. No further illustration (save for wisps of a classical score in an opening interview) is either allowed or necessary; testimony is a cinematic event unto itself.

The film begins on the Mexican side of the border as a young man talks about his older brother who was abandoned by coyotes (paid “guides” who smuggle immigrants across the border) to fend for himself in the Arizona desert. Later, a woman speaks about her son and grandson who died during a crossing. 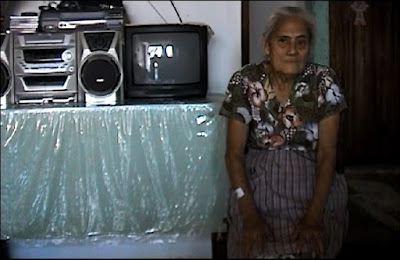 In this latter shot, Akerman and her crew are visible in the reflection of a television screen, and an off-screen voice asks a few questions in Spanish, but for the most part, the director cedes the stage to her subjects. Combined with the tracking shots through town (one virtuoso shot trails a long line of traffic at a border checkpoint, then peels off at the last second to remain in Mexico), Akerman assumes the persona of a visitor who is probing the surface with the keen eye of a trained observer, but also with the humility of a stranger who cannot claim any sense of authority over complex matters or the subjects who know their stories best.

The film provides eloquent witness to the perils of turn-of-the-century U.S. Immigration policy which made it more difficult for immigrants to get into cities like San Diego, with the side-effect of forcing them into far more dangerous crossings in the Southwestern desert. But Akerman isn't presumptuous enough to offer solutions to intransigent issues that have vexed locals for decades. She is there to record, with a sense of melancholy and compassion, the attitudes of people on both sides of the border. Later in the film, she hops over to Douglas, AZ, speaking first to the Mexican consul, then later to a sheriff who at least provides the impression of a balanced attitude towards “the problem” though whether he's playing nice for the camera is harder to say.

Akerman could take the opportunity to underscore the parochialism of an Arizona couple who expresses some outsized paranoia about the immigrant population, but the choice to let them speak for themselves is eloquent enough in its own right. I've read some complaints about Akerman not providing enough “facts” for an in-depth analysis, but I'm not sure how the first-hand testimony of bereaved relatives and Arizona residents doesn't qualify as “fact.” The director isn't out to shoot a “60 Minutes” segment. What she has provided instead is a sober, stately and respectful portrait, and if she resists overt commentary, the somber tone suggests that she most certainly has an opinion on the subject – just no cheap “click on my website” style solutions to offer. 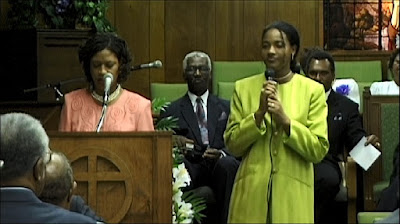 Akerman is even more self-effacing in the documentary “South” (1999), provided as a bonus on the second disc of this set from Icarus Films. She planned a “meditation” on the South, but the film changed its focus when James Byrd Jr., an African-American man, was chained to the back of a pick-up truck and dragged to his death by three men claimed to be white supremacists. The murder shook the small town of Jasper, TX and, far too briefly, the rest of the nation.

Akerman uses a similar strategy as in “From the Other Side,” employing tracking shots through town (including one that may be a retracing of the pick-up truck's route) and no-frills interviews with locals, as well as a lengthy sequence filmed at Byrd's funeral service. The facts are shocking enough, but I let out a gasp when one African-American woman noted quite matter-of-factly that there “isn't as much lynching” as in the old days. Not as much, mind you, but still some. 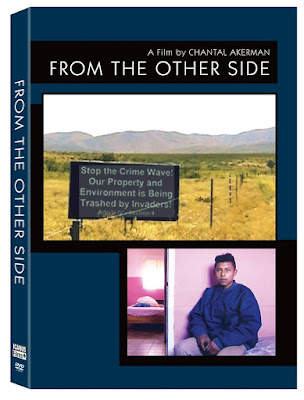 Video:
Both films are presented in 1.78:1 anamorphic transfers. “South” is the weaker of the two transfers, suffering from mediocre image detail throughout, something visible even in the first shot as the lettering on a church sign isn't in sharp resolution. However, the transfer is acceptable enough that it doesn't interfere with the viewing experience. “From the Other Side” fares better. Image detail isn't exactly razor sharp and the colors are a bit wan at times, but overall the picture is solid enough to do justice to the director's painterly compositions.

Audio:
The Dolby Digital Stereo tracks aren't particularly dynamic, but the ambient sound on the tracking shots in “From the Other Side” is deep enough to convey the desired effect. I had a problem with the volume level on “South.” No subtitles are provided and I needed to crank the volume to double the normal level to make out all of the dialogue. However, that's a minor enough issue. English subtitles are provided (and are non-optional) for the Spanish dialogue (but not the English) in “From the Other Side.”

Extras:
The films are housed on separate discs in this two-disc collection. The disc with “From the Other Side” includes a five-minute clip from Akerman's magnificent film “From The East” (1993), also released by Icarus a few years ago. Otherwise, there are no extras.

Final Thoughts:
While we might all hope for more souped-up releases with restored transfers and piles of extras, it's fantastic that Icarus has now released three of Chantal Akerman's recent and lesser-seen documentaries. I wouldn't rank either of these with her phenomenal “From the East,” but that's a tough standard. “From the Other Side” and “South” are excellent additions to anyone's library.
Posted by Christopher Long at 9:29 AM