(An Akerman A Day continues with... five Akermans in one day. How can you beat that kind of value?)

From the lonely confines of a sparsely furnished room to the wide open spaces of the bustling streets of New York, Chantal Akerman’s films of the '70s comprise a unified body of work of remarkable variety. Her films, reasonably labeled as structuralist and characterized by long takes, may rhyme with one another but they seldom repeat.

Both the short film “La Chambre” (1972, 11 min.) and the first half hour of the feature “Je, tu, il, elle” (1975) feature a woman (played by Akerman) alone in a room but they provide strikingly different treatments of cramped domestic spaces. In the silent “La Chambre” a camera (operated by frequent Akerman collaborator Babette Mangolte) pans slowly around a cluttered room. It reveals a red dining chair, a carefully arranged still life with fruit on a table, a chest of drawers and then Akerman lying in bed gazing at the camera and bathed in a soft painterly light streaming from the window. The camera keeps panning, Akerman receiving the same attention as the décor, and completes three full circles. Each time we see Akerman, she is behaving somewhat differently. Just when the rhythm seems to be set, it is broken as the camera suddenly stops and pivots back left then right again, placing our star more at the center of the arc, setting a new rhythm which is broken yet again by one final move.

In “Je, tu, il, elle,” Julie (Akerman) lives in self-imposed isolation in a Spartan ground-level apartment. In one shot, she lies on the bed facing the camera in a pose that directly references “La Chambre,” but Akerman has a completely different scheme in mind here. The room starts out cluttered like “La Chambre,” but Julie clears out everything (“An empty room feels larger”) except for a mattress which she sets on the floor. Though there are several camera movements, the enduring image from this sequence is a flat, static composition of Akerman, sometimes naked, sometimes partially clothed, lying or sitting on the mattress. She writes letters (to whom?) which she reads in voice-over while spoon-feeding herself pure white sugar from a brown paper bag. The lighting scheme here is much harsher, heightening the sense of claustrophobia. “La Chambre” was a panorama; the room in “Je, tu, il, elle” is part sanctuary, part prison.

In “Hotel Monterey” (1972), the camera explores the spaces of a run-down Upper West Side hotel, tracking down hallways or standing inside a moving elevator, following it up and down, and surprising a few would be riders in the process. There aren’t many people in the hotel, however, which is part of its sad story, but even the non-descript hallways and rows of identical doors acquire a dignified beauty as the camera roams ever deeper and higher. Just when we think we’re sealed in this hermetic space, Akerman has a surprise in store for the end. Suddenly, the camera reaches the roof, emerges into daylight and then breaks out into the city itself to provide an outside perspective on the hotel and situate it in the city.

This unexpected movement feels like a transition to the gorgeous feature-length“News from Home” (1976) which takes us to the streets of New York. Images of the city are accompanied on the soundtrack by Akerman reading letters written by her mother. Another rhyme now. In “La Chambre” the story took place in between camera movements, as it panned back to see Akerman in different poses. In “News from Home” the story occurs in between letters which mostly mention minor events or offer pleas for Akerman to write home more often. The letters, not always read in chronological order, indicate changes and invite us to fill in the gaps.

Stylistically, “News from Home” is a tour-de-force. It begins with a series of static shots of alleyways and parked cars before introducing a few short, sharp pans then eventually longer more fluid 360-degree movements. Akerman films above ground and below ground (some of the subway scenes are magnificent), during the day and in the blurry orange-red night. After the camera has been fixed for an hour, it is abruptly set loose. Most of the final half hour of the movie consists of several long tracking shots taken from different vehicles: a street level shot from a car, a higher perspective from an elevated train and a final movement filmed from a boat or ferry. And here’s another rhyming moment, one that resonates with the end of “Hotel Monterey.” After exploring the city so rigorously, the camera breaks free from its urban confines to turn back and record a broader view from the river. As the camera gradually sails away, we see more and more of the retreating city skyline. If you don’t feel a twinge when the World Trade Center finally comes into view, there’s something wrong with you.

These abrupt ruptures are a common feature for Akerman. Her magnum opus “Jeanne Dielman, 23 Quai de Commerce, 1080 Bruxelles” (1975) meticulously traces the daily chores of its title character but ends with a sudden plot development that completely ruptures what seemed to be a rigid structure. Likewise, these explosions into open space in “Hotel Monterey” and “News from Home” as well the final camera movement in “La Chambre” refuse the easy comfort of strict rules.

And, rhyme time again, Akerman pulls off a similar, but not identical, trick in “Je, tu, il, elle.” After spending a half hour watching Julie alone in her room we expect the entire film to unspool there but suddenly we see a shot of the apartment door and, next thing you know, Julie’s out and about. The film is built around two more discrete segments. The first is a sexual encounter with a trucker who spends nearly ten minutes talking about his penis, and the second a sexual encounter with her ex-girlfriend. The latter is filmed in several long, frank shots of lovemaking that capture the heat and intimacy of the moment yet are shot with such a flat affect (typical of Akerman) that they don’t feel voyeuristic.

Shot in wide-screen and featuring a more conventional narrative as well as a cast of professional actors, “Les rendez-vous d’Anna” (1978) appears to be the odd duckling in this grouping but it still shares much in common with the other films in the set. Anna (Aurore Clement) is a director who travels from city to city in Europe to help promote her newest film. It’s a damned strange press junket though. We never see the film or hear anything about it, and Anna appears to be the only one making the rounds. The film is a travelogue almost devoid of any sight-seeing features. With the exception of a trip to a not-quite suburb, Anna’s trip consists almost entirely of a series of hotel rooms or public spaces (trains, train stations, etc.). She not only travels alone but seems to wind up in the same place each time. Kind of like “Up in the Air.” Except good. A series of encounters (with a lover, with her mother, with an old family friend) do little to break up the monotony.

Some might think of Akerman’s formalist cinema as stringent, but I’m struck by her sly sense of humor which, curiously enough, frequently centers on food. Poor Jeanne Dielman unable to figure out where to put that pot of cooked potatoes. Akerman in goddess pose in “La Chambre” munching on an apple. Julie shoveling sugar down her throat. A deadpan scene where Julie and the trucker share a meal at a diner and listen to a gaudy American TV show (“Cannon,” I think) that consists mostly of gunshots, sirens and revving motors.

I find Chantal Akerman’s films warm, playful, vital, and thoroughly compelling. The movies in this set offer the very best of her work (aside from the previously released “Jeanne Dielman”) and it’s hard to believe she hadn’t even turned 28 by the time she wrapped shooting on the last film in the set. Akerman is an electric talent like no other. 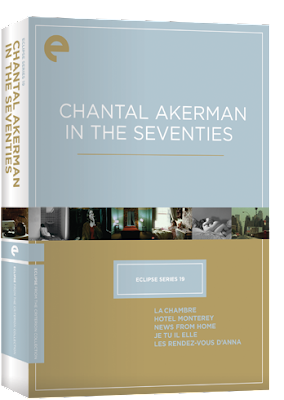 Video:
“Les rendez-vous D’Anna” is presented in its original 1.66:1 aspect ratio. All other films are presented in their original 1.33:1 full-screen ratios. “Je, tu, il, elle” is in black-and-white, everything else in color. Though the Eclipse series does not provide restored transfers, the films here look quite good. I was very pleasantly surprised by the quality of “Je, tu, il, elle” which I have previously only seen on a miserable VHS copy. The harsh lighting scheme and the sharp shadows on the walls stand out vividly here. Some of the darkest shots from inside the truck are lacking, but that’s my only complaint.Overall, I’m thrilled with the transfers here.

Audio:
“La Chambre” and “Hotel Monterey” are silent. The other films are presented in Dolby Digital Mono, and there’s not much to say abut the audio design. I wonder if we’re missing some of the richness of the original ambient soundtrack in “News from Home” but I have no way to make that judgment. Optional English subtitles are provided for the sound films.

Extras:
As with all Eclipse release, no extras are offered with this set. However, as usual, the brief liner notes are very informative.

There are three discs in the set.

Final Thoughts:
“Jeanne Dielman” is Akerman’s indisputable masterpiece and Criterion’s release of the film was probably the DVD highlight of 2009. “Chantal Akerman in the Seventies” is a marvelous companion offering that shows how deep and rich Akerman's body of work is.

I’m not shy about using the m-word and I’m going to do so again. “Je, tu, il, elle” is a masterpiece that would be the crowning achievement for many directors, and I won’t argue with anyone who applies the same term to “News from Home” or “La Chambre.” I don’t think “Hotel Monterey” is quite in a class with those films but it’s still mesmerizing. “Les rendez-vous d’Anna” is a mild disappointment after her earlier work in the decade, but that’s one hell of a standard to hold someone to. Most filmmakers never dream of making something the caliber of “Anna” and if that’s your “weakest” film of the decade then I’m going to guess that your name is Chantal Akerman.

This is a phenomenal set, perhaps the best the Eclipse series has offered.
Posted by Christopher Long at 7:24 AM