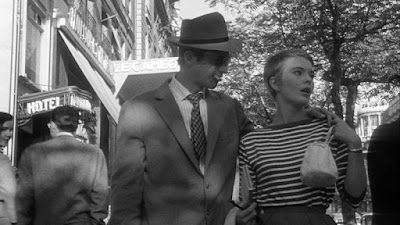 
What makes Jean-Luc Godard's "Breathless" (1960) one of the three or four most important sound films ever made? "Breathless" isn't the first French New Wave film, or even the first French New Wave film to win major awards; Alain Resnais' "Hiroshima Mon Amour" (159) was nominated for the Palme d'Or and netted Marguerite Duras an Oscar nomination for Best Screenplay just the year before. Claude Chabrol was already an established New Wave figure, even if he didn't quite know it at the time.

"Breathless" is not the first film ever to use a jump cut, though it is the first to use the technique so extensively. "Breathless" was nowhere close to being the first film to shoot on real locations, and adopted many of its "fly on the wall" techniques from Italian neo-realism and direct cinema. "Breathless" hardly employs an original plot: just a guy, a girl, and a gun. It's not even Godard's best film. So why in the heck is "Breathless" so important?

Because "Breathless" changed everything. OK, that's an exaggeration. It didn't change the balance of power in the Middle East. It didn't catapult the Earth out of its orbit. It didn't make Americans care about soccer. But it changed pretty much everything else. 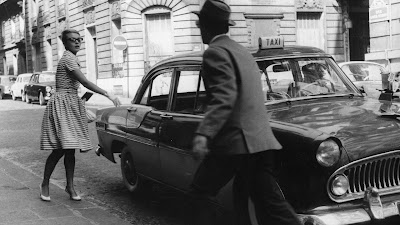 "Breathless” is a unique hybrid, both the realization of years of critical writings by Godard and his fellow Cahiers du Cinema critics, and also a film made by an unabashed cinephile. In a sense, it is one of the earliest "fan pics" ever made. Godard did not come to destroy Hollywood, he came to celebrate it in all its genre-determined glory. "Breathless" contains enough references to other films and filmmakers that even Quentin Tarantino couldn't keep them all straight. By placing these cinematic references right alongside the literary and philosophical ponderings of his young protagonist (however shallow those thoughts might be) Godard also asserts that film is every bit as valid an art form as any other. Godard collapsed "high" and "low" culture before the practice became de rigueur in post-modern art.

"Breathless" is also a tour-de-force of guerilla film-making. Shot on a modest budget with hand-held cameras specially modified by now-legendary cinematographer Raoul Coutard, many scenes are filmed right on the streets of Paris or in tiny apartments where a standard movie crew for the time could never have fit. The City of Lights has rarely looked so intimate. This fly-on-the-wall approach gives the film the feeling of actuality footage; dialogue written on the day of shooting contributes to the impression of spontaneity. Godard has quite properly described “Breathless” as being primarily a documentary about actors Jean-Paul Belmondo and Jean Seberg. 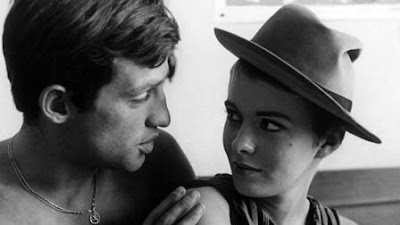 Belmondo as Michel Poiccard. Seberg as Patricia Franchini. Along with Jean-Pierre Léaud's Antoine Doinel, they are the most iconic characters of the French New Wave. Belmondo delivers a single-mindedly superficial performance, full of self-conscious mannerisms, poses, and cool looks; that bit where he runs his fingers over his lips is still electric. Seberg was fresh off her critically panned performances for Otto Preminger in "Saint Joan" (1957) and "Bonjour Tristesse" (1958). The only good press she received was from the Cahiers' writers, especially Godard. Though her acting in "Breathless" hardly dazzles, she was nonetheless an inspired casting choice. Seberg speaks French with a grating American accent that no doubt made her seem that much more exotic and erotic to French audiences, and her cry of "New York Herald Tribune!" as she promenades down the Champs-Elysées is, in my opinion, the most memorable line in any French New Wave film. And just about any film.

Of course, there's also the editing. If you've ever taken a film class, you have already been trained to think "jump cut" at the first mention of "Breathless." The film indeed uses jump cutting extensively, but this was never the plan during shooting. In the editing room, Godard realized that many of the dialogue scenes were boring and overlong, so he simply decided to remove all the uninteresting stuff in the middle of each take, paying no heed whatsoever to Hollywood's sacrosanct rules about continuity. The stitches are meant to show rather than working invisibly to seduce the viewer into the world of the narrative.

And this, all of this and then some more, is why "Breathless" remains so phenomenally influential. While there is no single technique pioneered by Godard in this film, the combination of jump cutting, hand-held shooting, violations of the 180 degree line and a host of other convention-shattering choices set world cinema free. I exaggerate again, but “Breathless” sounded a clarion call to filmmakers young and old, from East and West. All rules are meant be broken, and there is no right way to make a movie. "Death to the aristos!" It also helped that while herding so many sacred rituals of filmmaking to the guillotine Godard also made a wildly entertaining movie.

At this point, I am supposed to write that "Breathless" may seem dated to modern audiences because so much of its style has been copied, and that which once seemed revolutionary now almost appears old-fashioned. But I'm not going to say that. Audiences today might not be shocked by the jump cutting, or awed by the documentary-style filming, but "Breathless" remains as fresh and vital today as when it was released over 50 years ago. "Breathless" is as essential as cinema gets.

Also, there's a plot, and it's a pretty nifty one about love and betrayal and misunderstanding and fate. I'm not saying it doesn't matter, just that you shouldn't let it distract you from all the good stuff. 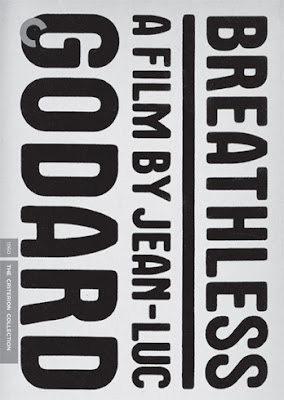 Criterion released “Breathless” on DVD in 2007 and on Blu-ray in 2010. This 2014 dual-release format combines both of those releases in the same package: 2 DVDs (one with the film and some extras, the other with the rest of the extras) and one Blu-ray disc. They offer the same transfers as before.

The SD was already a very strong transfer and the 1080p upgrade was/is even better, of course. The film is supposed to look a little rough around the edges at times, so you shouldn't expect a flawlessly smooth and shiny image. The image detail is superb throughout with a very satisfying grainy look present throughout.

Audio:
The LPCM mono track isn't intended to sound too dynamic. The sound is always crisp and clean with the wonderful score by Martial Solal shining through in lossless audio. Optional English subtitles support the French audio.

Extras:
All of the extras have been imported from previous releases.

"Chambre 12, Hotel du Suede" is a 1993 documentary (78 min.) directed by Claude Ventura in which the director revisits the people and places from "Breathless." It's a bit self-conscious, occasionally irritating, but very enjoyable for any fan of the film.

"Charlotte et Son Jules" (1959, 12 min) is a short film directed by Godard and co-starring Belmondo. The whole movie is basically a long-winded speech by a pompous ass trying to show off for his girlfriend and leading to a very funny punch line. Not a masterwork, but a cute movie, a reminder of how playful Godard was at the time.

"Breathless as Criticism" (11 min) is a video essay written by Jonathan Rosenbaum which explains some of the cinematic references Godard makes in the film, and connects Godard's critical writings to his work as a director on "Breathless."

"Coutard and Rissient" (22 min.) is a 2007 interview with "Breathless" cinematographer Raoul Coutard (who worked on many films for Godard) and cinema's great mystery man Pierre Rissient who also worked as assistant director on the film.

"Jean Seberg" (19 min) is a video essay by Mark Rappaport who directed the 1995 film "From the Journals of Jean Seberg." The essay examines the career and the memorable face of the actress who died far too young in 1979.

The collection finishes off with an interview (10 min.) with famed documentarian D.A. Pennebaker (who collaborated with Godard on the film "One A.M" which eventually became "One P.M.")

All that's missing is a commentary track. Phenomenal.

Final Thoughts:
People, it's “Breathless.” That's all you need to know.
Posted by Christopher Long at 8:00 PM