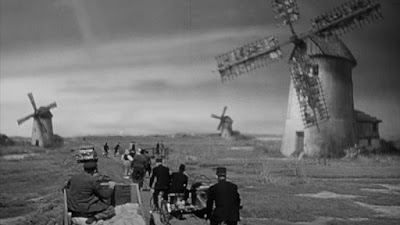 
Alfred Hitchcock never worried much about realism. When intrepid reporter Johnny Jones (Joel McCrea), on assignment in the Netherlands on the eve of war in Europe, tracks an assassin to a rickety windmill, he doesn't bat an eye when the inside turns out to be approximately five times larger than the outside. Neither did Hitchcock. The gigantic grinding gears and multi-story machinery were the perfect way to convey the vastness and menace of the conspiracy in which our hero (and the rest of the world, by extension) was now enmeshed. And, besides, it just looks cool.

Sometimes the director's penchant for indulgence independent of external logic courts absurdity. In one scene, a shady detective invites Jones to the top of the Westminster Cathedral tower (the action has shifted to London) with the intent of sending him back down at terminal velocity. As Jones peers over the edge, the killer backs all the way to the opposite wall, raises his hands to push and then lunges blindly at Jones; a sharp cut from across he square shows a tiny body plunging down, down, down. Spoiler alert: it's not our main character. Bad technique, old chap. Better look next time... er, never mind.

Whether the sequence is meant to produce suspense or laughter doesn't really matter; Hitchcock is fully capable of juggling both modes over an entire feature. Indeed, though “Foreign Correspondent” (1940) is about the very serious subject of world war, the urbane and slightly aloof characters only take things seriously when circumstances absolutely demand it. Neither a dead body nor the specter of global war is reason to keep a good quip to yourself. 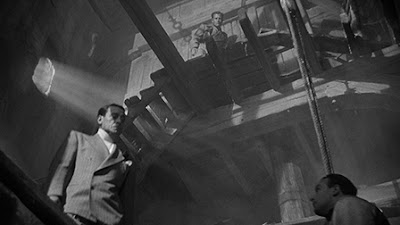 All-American Johnny Jones is assigned to the job by his newspaper publisher (Harry Davenport) precisely because he neither knows (What European crisis?) nor cares one bit about world events; readers want a ripping story, not boring analysis. Hitchcock and screenwriters Charles Burnett and Joan Harrison relate the almost-current events with a few crucial months of hindsight, critiquing the “What me, worry?” attitude towards the Nazi war machine that had perhaps been possible in 1939 (when the film is set), but seemed increasingly indefensible in the spring of 1940 when the movie was shot.

Jones (re-christened by Powers as the more distinguished Huntley Haverstock) treats his initial meeting with Dutch diplomat Van Meer (Albert Basserman) with suitable professionalism, but he's just as interested in Carol Fisher (Laraine Day), the lovely and quick-witted daughter of an activist (Hebert Marshall) who heads a European peace movement. In one of the film's more amusing touches, Hitchcock can practically be heard sighing over the contractual obligation to include a love story, “developing” it by simply having the two love birds quite abruptly say, “I'm in love with you and I want to marry you,” prompting Jones's quip, “Well, that cuts down on our love scene quite a bit.”

In typical Hitchcockian fashion, the plot depends on a series of neatly-fitting contrivances that can grow tiresome if you're not fully propelled by the insistent force of the narrative. The story also pauses for the occasional virtuoso set-piece, the finest being Jones's pursuit of the assassin through rainy London, forcing his way through a crowd of clueless onlookers stubbornly huddled under umbrellas that bob and sway to indicate the line of pursuit even as they hide it. 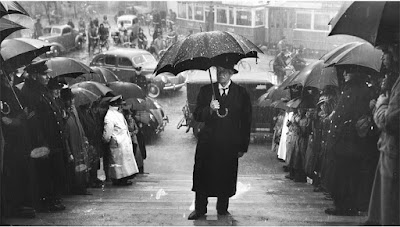 Yet the final act turns out to be something entirely unexpected. After one puzzle piece after another snaps perfectly together, the seemingly inevitable denouement is derailed by the chaos of official no-doubt-about-it war, leading to a remarkable and surprisingly moving sequence aboard an airplane shot down over the ocean. Perhaps it seems too incongruous to some viewers, but I find it the strongest sequence in the movie because it feels the least coldly calculated though, of course, that's just an illusion.

The film is sometimes diminished as Hitchock's contribution to the war propaganda machine (“We must get involved!”) but propaganda is hardly a pejorative term. Even as the characters exchange witty banter and the comic flourishes pile up, the film accumulates gravitas from a journalistic sense of immediacy. It shifts as events do, almost playing like a live-action report on the cusp of one of the most transformative events of the 20th century. In a sense, “You Are There” and the film still vividly conveys the import of those crucial days. 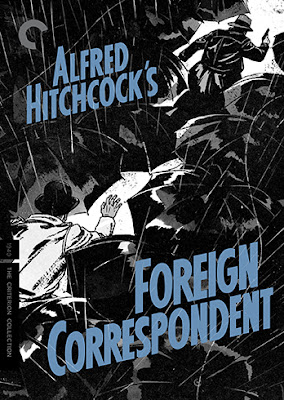 Video:
The film is presented in its original 1.37:1 aspect ratio. This 70+ year old film doesn't show much in the way of scratches or other damage. The 1080p transfer shows strong black-and-white contrast. The detail quality is perhaps not quite as sharp as Criterion's top-end high-def transfers, but it's still very solid, appropriately showcasing the special effects by the legendary William Cameron Menzies. A fine grain-structure is evident, but perhaps a bit softened by whatever boosting was required.

Like most Criterion releases today, this is a dual-format release. Two DVDs are included (one with the film, one with the extras) as well as a single Blu-ray. The DVDs have not been reviewed here.

Audio:
The LPCM Mono track is clean and distortion-free with all dialogue clearly mixed. Alfred Newman's score may have sounded a bit more dynamic in theaters, but it's treated well enough here. Optional English subtitles support the English audio.

Extras:
Criterion has included a solid array of extras.

Writer Mark Harris discusses “Hollywood Propaganda and World War II” (25 min.) in a new interview recorded by Criterion. He talks about how Hollywood embraced the idea of war propaganda more and more as the war progressed and discusses how “Foreign Correspondent” changed from its first days of development under producer Walter Wanger in 1936 to its eventual release in 1940. The film's last scene (a radio address) was tacked on at the last minute at the request of the studio and was scripted by Ben Hecht.

Criterion stalwart Craig Barron provides an analysis of the visual effects in the film (19 min.) which were supervised by William Cameron Menzies. This interview discusses the more obvious effects sequences (the airplane crash at the end) and some of the more subtle effects used in other sequences (matte paintings used to expand the sets). Very interesting material.

The disc also includes a 62-minute special in which Dick Cavett interviews Alfred Hitchcock. It originally aired on June 8, 1972 and features Hitchcock at his hammiest. I've only watched the first ten minutes, but look forward to the rest.

We also get an Audio Adaptation (25 min.) of “Foreign Correspondent” that played on the radio program “Academy Award Theater” on Jul 24, 1946.

“Have You Heard?” is a text and still feature that presents an article Hitchcock prepared for the Jul 13, 1942 issue of “Life” magazine to highlight the dangers of spreading irresponsible war rumors.

Final Thoughts:
1940 was a busy year for Alfred Hitchcock as he was just making the full-time move to America. “Rebecca” took down Best Picture that year (though Hitchcock lost Best Director to John Ford for “The Grapes of Wrath”), but “Foreign Correspondent” also netted a Best Pic nod as well as five other nominations. It was quite an Oscar field with “The Philadelphia Story” and “The Great Dictator” also in competition.

“Rebecca” may or may not be the better film, but “Foreign Correspondent” is much more quintessentially Hitchcockian. Criterion's high-def transfer is strong, and the extras are fairly copious as well. Recommended, of course.
Posted by Christopher Long at 9:50 PM