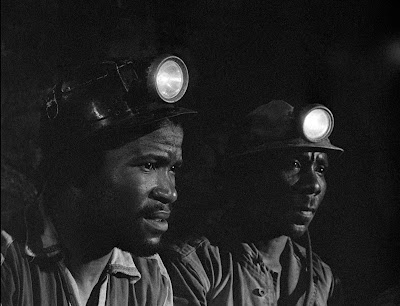 
With his debut film “On the Bowery” (1956), Lionel Rogosin melded the techniques of neo-realism and the works of pioneering documentarian Robert Flaherty (influences he openly cited) to form his own unique hybrid, a scripted movie that felt and looked so authentic it received an Oscar nomination for Best Documentary. I described it as one of the most “lived-in” films I've ever seen, in part because Rogosin spent months actually living with and getting to know the down-and-out New York City day laborers of the Bowery before presuming to represent their lives on film.

If Rogosin was feeling his way through his first film, he was clearly pleased with the end result (he knew a good movie when he saw it) and brought the same humble and collaborative spirit to his next project, an audacious effort intended to expose the horrors of South African apartheid to a world that had little interest in the plight of poor black Africans. Rogosin was no longer a neophyte filmmaker, but faced a new challenge as he had to shoot clandestinely under the eye of a ruling power that knew how shameful its secrets were.

Rogosin and his crew convinced the South African government they were making a film about indigenous music that would show the world how happy black Africans were and spun other fanciful excuses when necessary. Meanwhile he teamed up with the writers and staffers of “Drum” magazine, many of whom were anti-apartheid activists, who helped guide him through the streets and tenements of Sophiatown, a nonwhite suburb of Johannesburg. 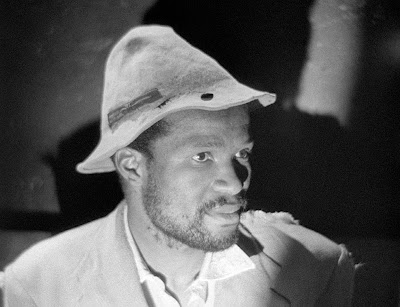 “Come Back, Africa” (1959) begins with the proud claim that “There are no professional actors in this drama of the fate of a man and his country.” The story concerns Zachariah (Zachariah Mgabi) who has just moved to Johannesburg (and soon to Sophiatown), temporarily leaving his family behind in his rural home province as he seeks work in the gold mines. Zachariah finds a daily routine rigidly circumscribed by a Byzantine bureaucracy: he needs a permit to work, a permit not to work, a permit to leave, a permit to return, a permit to get a permit. However, the constantly watchful eye of the law blinks shut when the white citizens are not directly involved. One local explains a long-unsolved murder to Zachariah:”Nothing is ever discovered in Sophiatown.”

Eventually Zachariah sends for his wife and children, but life doesn't get any better once they are reunited. He drifts from job to job not because he is a poor worker, but because the slightest misstep or twist of rotten luck can result in immediate termination. And he has no recourse in a society where black Africans dare not get “cheeky” with the white elite or risk permanent repercussions. In one of the film's most powerful sequences, he seeks domestic work from a woman who decides to rename him Jack because Zachariah “won't do” and berates him so incessantly he has no choice but to quit.

Mgabi and the rest of the amateur cast deliver performances that are all the more compelling for a lack of polish heightened by the fact that some of the actors did not speak English as a first language. I can only return to “lived-in” as a descriptor. The drama is quite obviously staged, sometimes even rather rickety and contrived, and yet the viewer gets the sense of total immersion in a specific time and place. Sophiatown has no gleaming architecture or sculpted public spaces (many minority citizens had already been forcibly relocated and the suburb would soon be completely emptied and rebranded as Triomf for a mostly white demographic) but it is still represented in the film as a vibrant center of cultural and intellectual life. 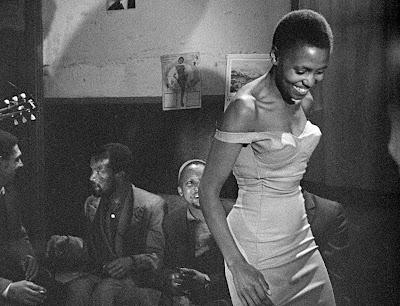 In the movie's best-known sequence, the journalists of “Drum” (including Bloke Modisane and Lewis Nkosi who both co-scripted the film with Rogosin) engage in an extended and riveting debate over the role that Liberals might play in the resistance and the root causes of organized crime in the slums. The scene climaxes with the arrival of local singer Miriam Makeba whose amazing song would vault her to international stardom (and even a 1966 Grammy) soon after the movie's release.

The movie's final devastating scene is profoundly moving, a testament both to Rogosin's skill as a director and dramatist and to Mgabi's ability to tap a raw vein. I won't say that a professional actor couldn't have pulled off a similar feat, only that Mgabi does it as powerfully and as sincerely as anyone could manage.

The same can be said of “Come Back, Africa” which succeeds simultaneously as activism, as drama, and as a time capsule. It feels like the delicate spell would be broken if a single variable was altered: the nonprofessional acting, the surreptitious location shooting, the combination of scripted drama and improvised dialogue, the sudden bursts of joyous music. Whether Rogosin stumbled onto a magic formula or carefully refined his craft through experimentation and an openness to collaboration, he and his crew flat-out nailed it. Again. “On the Bowery” was a tough act to follow. “Come Back, Africa” was one hell of an encore. 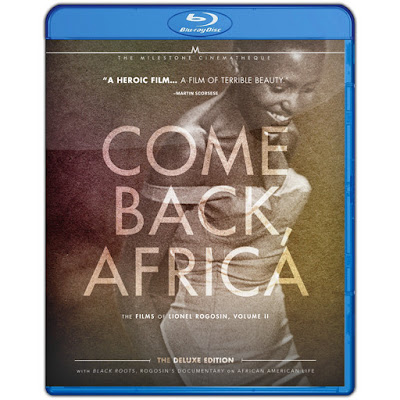 Video:
The film is presented in its original 1.33:1 aspect ratio. This high-def transfer is sourced from a recent restoration conducted by the Cineteca del Comune di Bologna. There's just the occasional bit of damage visible from time to time and the black-and-white contrast isn't particularly sharp, but the image detail is strong throughout, essential in preserving the film's “documentary” sense of space. Milestone has provided yet another strong transfer on par with their excellent work for “On the Bowery.”

Audio:
The LPCM 2.0 audio track is crisp. Dialogue is clearly mixed and the music (Makeba's vocals, street bands, and the score by Chatur Lal) is well treated by the mix. There are two different subtitle options. The first (default) option provides only English subtitles for non-English dialogue. The second option is SDH (Subtitles for the Deaf and Hearing Impaired) English subtitles for all dialogue which might be needed by listeners who have trouble with the accents. I was unable to access this second option either with the subtitle button on my remote or by going into the menu and turning the SDH subtitles on before watching the movie. I had to call up the pop-up menu while the film was playing and then turn the SDH titles on before it would work.

Extras:
If you've ever had the pleasure of renting or owning a Milestone title before, you are aware of the extraordinary care they put into each release. “Come Back, Africa,” subtitled “The Films of Lionel Rogosin, Vol. II” is no exception.

This is a two-disc Blu-ray package (also available on DVD).

Disc One includes “Come Back, Africa” along with a couple of substantial extras.

“An American in Sophiatown” (listed on the package as 64 minutes but actually running at 52 minutes) is directed by Michael Rogosin and Lloyd Ross and provides a thorough look at the making of “Come Back, Africa.” Combining an older interview with Lionel Rogosin (who passed away in 2000) with interviews with co-screenwriter Lewis Nkosi (who died in 2010), anti-apartheid activist Myrtle Berman (who also played the abusive housewife in the movie), cinematographer Emil Knebel, filmmaker Jonas Mekas and others, this feature covers just about all the bases, providing historical context as well as details about the movie's production. The feature also briefly touches on the falling out between Rogosin and singer Miram Makeba. Rogosin helped get her out of South Africa, but she later refused to promote the movie and described him as “unkind.” Details remain unclear, and we mostly hear from Rogosin who expresses a sense of betrayal.

The disc also includes an audio interview (1979, 20 min.) with Rogosin conducted by UN Radio which doesn't offer much new material from the making of documentary. We also get a Trailer (2 min.)

The movie can be played with or without a two-minute introduction by the seemingly inexhaustible Martin Scorsese.

Disc Two would be a stand alone disc from just about anyone other than Milestone.

The main feature is Rogosin's 1970 documentary “Black Roots” (62 min.) This was restored by L'Immagine Ritrovata in 2012 and isn't nearly as sharp as the transfer for “Come Back, Africa” but still solid enough. The documentary consists mostly of spoken testimony by African-American musicians as well as (filmed separately) lawyer and civil rights activist Florynce “Flo” Kennedy. The men and women recount various stories of discrimination such as one musician's recollection when, as a teenager, he was asked by his seemingly friendly white employer to cling to the outside of a car rather than ride in the back seat next to a white girl. The musicians frequently pick at their guitars while telling their stories which gives the movie a sense of being a protracted blues performance. Among the musicians is accomplished blues/gospel singer Reverend Gary Davis AKA Blind Gary Davis who tells the most harrowing tale of all and with some serious panache.

In the great Milestone tradition even this “extra” film gets its own extra. “Bitter Sweet Stories” (28 min.) is directed by Michael Rogosin and includes interviews with musician Jim Collier (one of the stars of “Black Roots”) and others as they talk about the making of “Black Roots.”

But wait, there's more. Milestone has also included the eclectic and lively documentary “Have You Seen 'Drum' Recently?” (1989, 74 min.) The movie is directed by Jurgen Schadeberg, one of the photographers for South Africa's popular “Drum” Magazine which was also influential in the making of “Come Back, Africa” (see above). Unsurprisingly, the documentary features a virtually endless array of great photographs both from the pages of “Drum” and of the magazine's many staffers along with details about their lives.

If I was going to complain at all, I'd say that a comprehensive set like this could also use an insert booklet of some kind, but I admit I'm a printed page junkie and I'm not really going to complain about a disc so densely packed as this one.

Final Thoughts:
Milestone continues to fight the good fight. With “On the Bowery” they helped to introduce a new generation of viewers to the works of the great and neglected Lionel Rogosin. Rogosin Vol. 2 is just as impressive as its predecessor, including both “Come Back, Africa” and “Black Roots” as well as a host of substantial extras. Streaming is simply no substitute for a smartly curated collection like this. This will figure prominently in the year end “Best Of” polls.
Posted by Christopher Long at 8:32 PM