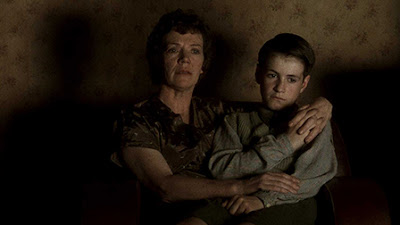 British writer-director Terence Davies' reminiscence of his childhood appears, at first blush, to be a very flattering portrait that borders on narcissism. Amidst the grayness of 1950s Liverpool, twelve-year-old Bud (Leigh McCormack) shines like a delicate angel, almost literally. Bud is often framed dead center in an otherwise dimly-lit composition, gazing wistfully off-camera with his gentle, pensive face bathed in the light of a film projector, a television screen, the moon, or perhaps from an unspecified source even higher up as he imagines a world as happy as the one portrayed in his beloved Hollywood movies.

Add in the musical accompaniment of church choirs and even Debbie Reynolds, and it's enough to make the viewer wonder if this perfect, innocent child could possibly be of mortal born. Then again, one of the film's other defining images is that of Bud securely nestled against his even saintlier mother (Marjorie Yates), somehow all alone with his unflinching protector even though he shares a cramped rowhome with a bustling cohort of older brothers and sisters. 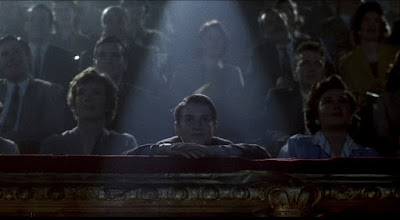 Davies, a Liverpudlian who was the youngest of many siblings, makes no secret that Bud (whose last name also happens to be Davies) is a portrait of the artist as a young man; Davies even faithfully recreated his childhood home, in slightly expanded and more flexible form, on set. It's fair to question why the director has chosen to portray his younger self as such a beautiful dreamer. The key comes in the director's explanation that the only truly happy time in his life was from age seven (after his abusive father died) to about age twelve, when a stable home life with mum gave way to conflict at secondary school and the adolescent (and adult) torment of a Catholic ashamed of his homosexuality.

The film depicts the very end of this idyll, the moment when “The Long Day Closes” (1992). In other works (his “Trilogy” of short films shot in the late '70s and early '80s, and 1988's “Distant Voices, Still Lives”), Davies' screen memoirs focused on far more morbid material; with “The Long Day Closes” he opens the treasure chest safeguarding his most-cherished memories and shares them with the world.

The film is by no means all sweetness and light. Bud sees the avalanche that's coming, most vividly in the embarrassment he feels when a shirtless bricklayer mockingly returns the boy's furtive gaze, but for now he can sustain a blissful existence by retreating to his happy places: a home with a loving mother and supportive siblings, and always the local theater playing all those wonderful Hollywood movies. A tenuous lifeline, but sturdy enough to hold for a while. 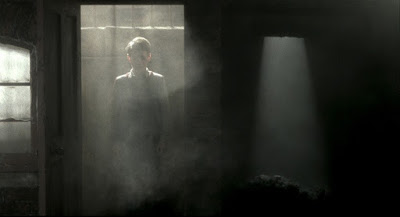 The movie's soundtrack is absolutely saturated with both music and dialogue from now-classic films; “Long Day” even begins with the 20th Century Fox theme playing as the camera roves over a street sign and a muddy Liverpool road that will lead us to the happy home that once was. Intrusions of more sinister film scenes (audio clips from “The Magnificent Ambersons” and of Mrs. Havisham in full meltdown in “Great Expectations”) remind us that all was not well even on the big screen, and that a storm is a-brewin'.

If this meticulously sculpted evocation of childhood sometimes seems a bit too pretty and ethereal, perhaps that's part of the point. Some viewers dismiss nostalgia as either sentimental or reactionary, but it can also be a corrosive. Such vivid memories of fleeting bliss don't necessarily bring happiness to the older artist mourning what is now lost forever. Perhaps it would be easier to forget it entirely and just trudge ahead. Davies keeps looking back until it hurts, and that's where his art just begins. 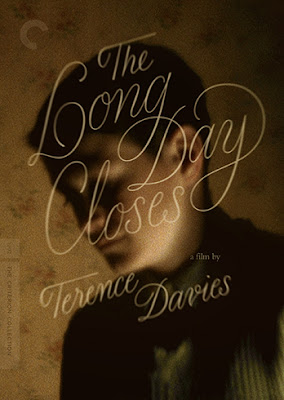 Video:
The film is presented in its original 1.85:1 aspect ratio. The new transfer was “created in 2K resolution... from the original 35 mm interpositive held by Channel 4.” The 1080p image is rich and sharp, vividly capturing the desaturated look Davies and cinematographer Michael Coulter wanted for the film (and augmented by a bleaching process at the lab). It looks both dreary and dream-like, perfect for the material.

Audio:
The film is presented with an LPCM 2.0 stereo mix. “The Long Day Closes” encroaches on rock opera territory with its wall-to-wall soundtrack incorporating everything from classical music to religious hymns to movie scores and songs. Debbie Reynolds' “Tammy” is the most memorable musical cue, but the film tucks in Richard Rodgers, Nat King Cole, Judy Garland, and much, much more. This lossless mix easily does justice to the dense soundtrack, according the music an appropriately enveloping quality. Dialogue is clearly mixed, but you may need the optional English subtitles to make out some of the Liverpudlian accents. The subtitles, by the way, also identify each song and each film from which dialogue clips are taken, which is no small task.

Extras:
The film is accompanied by a commentary track by Davies and cinematographer Michael Coulter. It was recorded in 2007 and was previously included on a BFI standard definition release of the film.

The disc also includes a 1992 episode of “The South Bank Show” (47 min.) which played on British television a month before “Long Day” debuted at Cannes. It's mostly a one-on-one interview with Davies in which he speaks candidly about his childhood and the various influences on the movie. Davies can sometimes come across as terminally serious, but he lights up when talking about his fondness for Hollywood musicals. Definitely worth watching.

An interview with writer Colin McCabe (2013, 14 min.) provides production background. McCabe was formerly head of the BFI Production Board which helped finance some of Davies' earlier films. McCabe served as executive producer on “The Long Day Closes” and he shares details about the film's journey from the planning stages to the big screen.

Production designer Christopher Hobbs (2013, 20 min.) is also interviewed about his remarkable work on a film that might look deceptively simple, but ask yourself how easy it is to shoot in a tiny multi-story rowhome.

The insert booklet includes an essay by critic Michael Koresky. Koresky writes most of the liner notes for Criterion's Eclipse collection and it's great to see him in longer form on a Criterion release. This is one of the best essays I've read in a Criterion booklet, and that's pretty high praise. [Update: Koresky's book “Terrence Davies” was published in August 2014 and has received praise all around.]

Final Thoughts:
“The Long Day Closes” is best seen when paired with “Distant Voices, Still Lives,” but this initial foray by Davies into the Criterion Collection is welcome even by itself. We can just hope that more will follow. The high-def transfer is sharp, the extras are solid if not extensive, and the movie's not so bad either. Strongly recommended.
Posted by Christopher Long at 9:11 PM