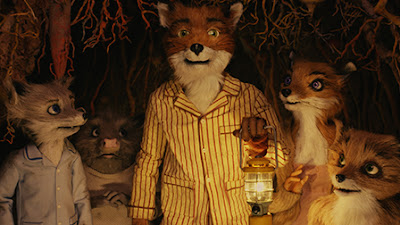 
For a filmmaker who has worked so assiduously to purge any vestiges of naturalism from his cinema, the move to animation is not so much the next step as a little shuffle to the side. In many ways, Wes Anderson's stop-motion foxes and badgers seem substantially more human than the characters of “The Life Aquatic With Steve Zissou” (2004) whose capricious behavior is not the recognizable end-product of any branch of homo sapiens evolution I know of.

The title character of “Fantastic Mr. Fox” (2009), voiced by George Clooney, is endearingly simple and sincere. He is fox who, like most foxes, likes to steal chickens. It's what he does. At least until his newly pregnant wife (Meryl Streep) begs him to go straight. He obliges by becoming a newspaper columnist and a responsible husband and father (to his frustrated but well-meaning adolescent son Ash, voiced by Jason Schwartzman), but old habits die hard, especially for a wild animal. As the introspective Mr. Fox asks, “How can a fox ever be happy... without a chicken in his teeth?”

The answer is that he can't, but our vulpine hero wants more than just chickens (though he really, really wants chickens); he wants to do something that will make everyone think he is... fantastic. So he sizes up the most dangerous targets in town, the (live)stocks of the notoriously evil farmers Boggis (Robin Hurlstone), Bunce (Hugo Guinness), and Bean (Michael Gambon), identified by local children as “one short, one fat, one lean.” One daring raid (with friends and sometimes family in tow) leads to another and then to retaliation from these titans of industry who do not intend to be outsmarted by a lowly fox. Terrible tractors, rabid blueberry-loving beagles, and apple cider floods harry our band of adventurers at every turn, requiring both physical and mental agility to outpace impending doom. 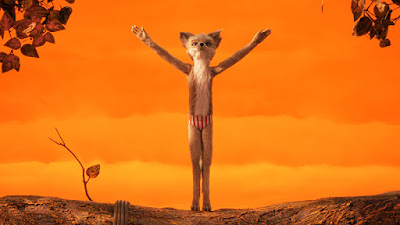 Anderson was raised on the works of Roald Dahl and began preparing his film adaptation (greatly expanded from Dahl's short book by Anderson and co-writer Noah Baumbach) years in advance, spending time at Dahl's legendary home which, in turn, inspired a primary setting in the movie. Demonstrating both wisdom and taste, he resisted the CGI siren call, relying on hand-crafted puppets and stop-motion animation supervised by Mark Gustafson and an army of collaborators. I am in awe of anyone willing to spend weeks putting just a few seconds of animated film into motion. The detail infused in each scene is often breathtaking (the set design is quite elaborate), though I respond most to the simplest of pleasures: seeing the foxes' fur rustle, evidence of a real object being carefully manipulated rather than a blob of pixels shimmering around a screen.

The sound design on the film is every bit as remarkable, and not just the top-notch voice work by Clooney, Streep, and an all-star cast including Bill Murray as a badger-at-law. Anderson chose to record the dialogue on location, at least in a sense. For example, in a scene where Mr. Fox is running through a field, Clooney does the same while delivering his lines. The result sounds both natural and pleasingly quiet. Studios today pride themselves on blowing out the speakers at every opportunity, but this gentle mix is all the more powerful for its restraint. I'm not quite as keen on the incongruous (to my taste) use of Beach Boys music on the soundtrack, but the score by Alexander Desplat is wonderful.

What can sometimes seem cloying and a bit twee in Anderson's live-action movies plays at the perfect pitch here. Mr. and Mrs. Fox may have the most convincing relationship in any of the director's films. He is sincere both in loving her and wanting to be the kind of fox she envisions; she is disappointed when he falls short, but still completely accepting of her wild animal of a husband. He's trying his best, and darned if he doesn't turn out to be pretty... fantastic. 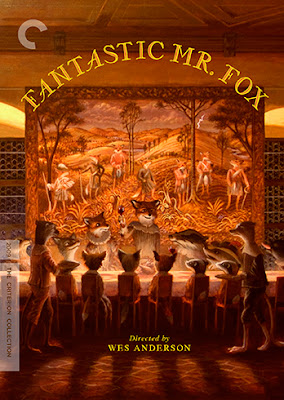 Video:
The film is presented in its original 1.85:1 aspect ratio. From the Criterion booklet: “The film was shot with Nikon D3 digital cameras with Canon lenses, and the entire production was completed in a fully digital workflow. The final color-corrected files were output to Rec. 709 high-definition color space for Blu-ray and DVD release.”

“The Fantastic Mr. Fox” was released on a Blu-ray/DVD combo pack by 20th Century Fox in 2010. I do not own that disc for comparison. However, the high-def transfer here is almost supernaturally clean and sharp, and the colors are so vibrant they almost jump off the screen. Detail is simply off the charts. You can see every furry hair on the puppets, sometimes each of them twitching separately. I can't think of a single complaint; this transfer is flawless.

Like most Criterion releases now, this is a dual-format release. There are two DVDs (one with the film, one with most of the extras), and a single Blu-ray which has the film and the extras. I only briefly checked the DVD and it looks very sharp as well with, of course, the expected decrease in detail level. But darn good on its own merits.

Audio:
The DTS-HD Master Audio 5.1 surround track is crisp and distortion-free as you would expect. I think a lossless mix is necessary to appreciate just how subtle this quiet sound mix is. Music is richly rendered as well. Optional English subtitles support the English audio.

Extras:
This release is absolutely jam-packed with extras, including the short promotional features found on the 2010 Fox release and then a ton more new to this Criterion edition.

There are seven promotional features from the former disc, including pieces on Roald Dahl (3 min.), the Adaptation process (7 min.), Puppet Makers (8 min.), The Cast (6 min.), Designing the World (8 min.) and Bill and Badger (7 min.)

To the best of my knowledge all of the other feature are unique to the Criterion release.

The film is accompanied by a newly-recorded commentary track by Wes Anderson which is interesting if occasionally a bit exhausting. Anderson shares his many influences, sometimes in painstaking detail, and discusses his fondness for Dahl and his work. There is also a brief (1 min.) introduction to the film by Petey, a character voiced by Jarvis Cocker.

The disc includes the feature-length “Animatic” version of the film which includes most of the movie's final audio along with “slightly animated” storyboards. Think of this as the very rough-sketch version in pencil of the final movie. I only watched the first five minutes, but fans may enjoy the slightly surreal feel of this preliminary edition of the movie.

We also get seven short features under the “Making Of” sub-menu: Recording the Voices (8 min. - includes video of the cast recording outdoors rather than in a recording studio), Puppet Tests/Early Animation (4 min.), Reference for the Art Department (1 min.), A Visit to the Studio (10 min.), Time-Lapse Photographs (2 min.), Music (5 min. - showing the schoolboy choir recording as well as Desplat conducting a brass section), and Miniature Objects (1 min.)

Two of the more substantive features focus on Roald Dahl. First up is an audio recording of Dahl reading “Fantastic Mr. Fox” (53 min.) - unsurprisingly he's a natural storyteller. Second is a documentary (61 min.) titled “Fantastic Mr. Dahl” which provides a biographical overview of the man and his work. It's a bit dry, but still worthwhile. Another author-oriented feature is a stills gallery including pages from Dahl's Manuscripts; this includes his very rough art sketches as well as letters between Dahl and his editor whose suggestions greatly shaped the book.

The “Awards Speeches” sub-menu is kind of fun. It includes three very-short animated acceptance speeches done in the style of the movie. One is a thank you for a critical award (1 min.), one was recorded for the potential of an Oscar win (1 min. - it never aired because Pixar's “Up” won instead), and a 27 second “Press Statement” for the Oscars by Clooney as Mr. Fox.

We also get a “Discussion and Analysis” (11 min.) by two expert film critics.

The disc also includes Set Photography by Ray Lewis (a stills gallery accessed by the arrows on your remote), a brief video piece about the Witch's Tree on Dahl's property (2 min.), and a Sony Robots Commercial (1 min.) directed by Wes Anderson.

There are so many short features (as well as a few lengthy ones) it takes a long time just to access each of them on the menu, and quite some time to write about as well.

The 32-page insert booklet includes animation sketches as well as an essay by critic Erica Wagner, an essay by Anderson about Dahl's Gipsy House, and the brief comic book “White Cape” which appears in the film though I admit I missed it.

Final Thoughts:
I find animation today almost universally unwatchable as I have severely limited interest in images created entirely on a computer. But a good stop-motion feature (real puppets manipulated by hand) is fine by me, and “Fantastic Mr. Fox” certainly qualifies. Criterion's 1080p transfer is flawless, and the extras are truly copious. The Criterion gang has an ongoing love affair with Wes Anderson, and it shines through with this release.
Posted by Christopher Long at 9:39 PM