For his brilliant and criminally underappreciated not-a-documentary “Fata Morgana” (1971), young Werner Herzog and his crew ventured into the Sahara desert and brought back a collection of exotic, hallucinatory images: burnt-out vehicles and crumbling factories jutting out of the sandy landscape, sinuous dunes stretching for miles, people staring into the camera and gesticulating mysteriously, and, of course, goggled pimps playing drums while singing unintelligible lyrics. Confused viewers could be forgiven for not immediately recognizing Herzog's underlying concept that the film takes place “on the planet Uxmal, which is discovered by creatures from the Andromeda nebula, who made a film report about it.” The alien visitors, you see, had no idea what to make of this doomed planet and its bizarre inhabitants, so they made a really messed-up movie about it before warping back home to smoke some fine Andromedan weed and forget the whole experience.

The titular visitors of Godfrey Reggio's new movie might be from Andromeda (perhaps that's them soaring over the moonscape to catch a glimpse of Earth-rise) or they might be represented by Triska the lowland gorilla whose face (eerily delineated in high-definition; I mistook her for a digital simian) is the first of many faces in the film that stare directly at... well, it's hard to say for sure. In part, they're looking at the audience who may also be the visitors of the title. 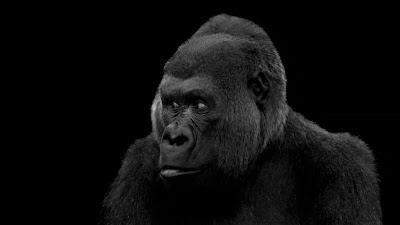 Whoever the visitors may be, they have a right, like Herzog's alien camera crew, to be perplexed by the spectacle in front of them. Following Triska the film presents a gallery of faces of all shapes, sizes and ages, shot in glossy black-and-white and suspended in darkness against what Reggio refers to as “the blackground.” Often they gaze blankly, other times expressions sweep over their visages in super slow-motion, rendering them both strange and ambiguous. It's hard to tell if one man is grimacing or laughing, or whether a young girl's scrunched-up mouth connotes irritation or bafflement.

Some sequences are more clearly contextualized than others. In one the film's most memorable segments, we see a montage of hands (also suspended in the blackground, severed from their anatomical moorings) as they jab at unseen touchscreens or clutch at invisible joysticks. The faces we see soon after are clearly gazing at computer screens of some kind, and even if they are all arranged in a single circular panning motion they are also, with few exceptions, completely alone as they peer into the matrix. Are they thinking anything at all as they slip willingly into the virtual stream?

Reggio first began fretting about the technological transfiguration of the world thirty years ago in “Koyaanisqatsi” (1983). Back then his apprehension focused more on large-scale items such as giant transformers and power grids that crisscrossed the desert landscape, but his attention has inevitably turned to the micro and the intimate over the years, technology we interact with personally and constantly. The shift began with “Naqoyqatsi” (2002), the third film in the 'Qatsi trilogy, when his anxiety bloomed into full-blown panic at our move to a virtual existence, a move eagerly embraced by a population that should be resisting it. When I wrote about “Naqoyqtasi” recently, I noted that it had been released just before we became umbilically attached to our smartphones and I wondered, “How much more rueful would it be if it was made today?”

The answer depends on the viewer, of course. If you would sooner live huddled under a bypass than give up your data plan, you probably think Reggio is an alarmist fusspot. If, like me, you shudder in a low-level state of terror at the “Body Snatchers”-esque sight of everyone permanently transfixed by the images on their four-inch LCD screens, if that daily horrorshow fills you with despair as you realize that everyone you know and everyone you ever will know has already turned into a cyborg, then your answer is “More rueful.” Much, much more rueful. Rueful like, “Is this really all there is now? So that's why Lars von Trier says 'Melancholia' has a happy ending.”

“Visitors” isn't entirely about technology and it isn't all faces. The movie sometimes cuts away to shots of uninhabited buildings, empty amusement parks, and barren swamps (many of these scenes are shot in post-Katrina New Orleans, Reggio's home town). The ideas here are more muddled and some of the images rather trite. Shots of endless piles of tumbling garbage, soaring seagulls, and time-lapsed scudding clouds are both banal and too on-the-nose, but Reggio has really never been a particularly subtle filmmaker. He's making big statements here, but fairly obvious ones, which opens him to charges of unjustified grandiosity. Does he really think he's the first person to warn humanity that we tread a dangerous path as we happily construct our future robot overlords and, by the way, continue to pollute and torment our landscapes? Of course, he's right.

“Visitors” isn't particularly deep, nor is it a masterpiece. It's certainly no “Fata Morgana.” Or “Koyannisqatsi” for that matter. It's also not the equal of a host of other related films that come to mind: the cinema portraits by James Benning (“Twenty Cigarettes” in particular) or by Andy Warhol, Nicolas Philibert's “Nenette” (where the title orangutan stares back at the viewer for the length of the documentary), or Abbas Kiarostami's “Shirin” (in which we watch women watching a movie we never see). And it's nowhere near as visionary as “2001: A Space Odyssey” whose imagery the movie evokes on multiple occasions. But that still leaves plenty of room for “Visitors” to be better than most flicks.

It's not deep, but I find it deeply moving. Maybe I'm just a sucker for a good face. The direct look into the camera was one of the defining elements of pre-narrative cinema, and it retains its unique, disconcerting power even in the digital age. By holding so long on its faces and by showing those faces change in slow-motion, “Visitors” constructs a contemplative space for the viewer either to see the familiar as unfamiliar (much like repeating a word many times can make it sound strange) or, in Reggio's words, to “make the invisible visible.” It can sound like a cop out to claim that you will take away from the movie whatever you bring to it, attributing any shortcomings to the audience, but this is at the very least a movie that requires an active viewer to interpret and complete the material. And in the “Save the Cat” era of spoonfed stories that neither demand nor permit any contribution from the viewer, that's not something to be dismissed.

It would all be a lot tougher to swallow without the contribution of Reggio's long-time collaborator, composer Phillip Glass. His pounding, circular score is an integral element of every single shot in the movie, enveloping each image in an aural cocoon and providing the propulsive structure to this mostly narrative-free experience. If you can't stand Glass, I would expect you to feel the same way about the movie. If you're Glass-friendly or at least Glassnostic, perhaps you will find yourself swept away by this heady audiovisual experience.

A week later I can still close my eyes and vividly recall several shots from the movie. I won't soon forget the sequence where we ever so gradually realize that we have been watching a group of fans as they watch an unidentified sporting event. Either due to the slow-motion or to tweaking in the digital editing bay, they all seem slightly out of synch, cheering or jeering at different times, as if each isn't quite witnessing the same thing simultaneously. The result is both uncanny and beautiful, which pretty much sums up how I feel about the movie. Whatever “Visitors” lacks in philosophical heft it more than compensates for in sheer sensual, textual pleasure. It's good to have Mr. Reggio back.
Posted by Christopher Long at 8:34 PM