I admit that I tend to diminish the roles of pathos and identification while watching movies, opting to be a detached observer more inclined to analysis than immediate emotional reaction. But I have rarely felt so intimately involved in the plight of a film's protagonist as in the case of Lars von Trier's twin masterpieces “Breaking the Waves” (1996) and “Dancer in the Dark” (2000). Since the movies are so closely related, all I will say about the latter is that it made me weep so uncontrollably it took me five years to screw up the courage to watch it again; the martyrdom of Selma Jezkova (Bjork) is a terrifying and deeply moving spectacle almost unrivaled in contemporary cinema.

“Almost” is a required modifier because of the existence of the film's predecessor. Von Trier had already become a festival darling (a status he would not maintain at all circuit venues later in his career) with his technically adroit but somewhat emotionally distant films of the late '80s and early '90s. After his experiences shooting the television series “The Kingdom” (1994), however, the pot-stirring visionary was keen on rejecting his previous work and pursuing an entirely new direction.

Adhering mostly but not entirely to the stripped-down tenets of the Dogme 95 manifesto, “Breaking the Waves” adopted a more overtly naturalistic style, though still highly self-conscious with its bobbing hand-held camera and disjunctive editing. The movie placed its characters and action almost literally in the viewer's face, inducing motion-sickness in some, and a disturbing but intoxicating sense of immersion for others.

Bess McNeill (newcomer Emily Watson) is a pure-hearted and somewhat simple-minded (for Von Trier, the two go together) young woman living in a Scottish fishing village ruled by stern elders who adhere to an old-timey religion that doesn't allow women to speak in church and has little use for outsiders. Nonetheless, the film opens with Bess's marriage to an outsider named Jan (Stellan Skarsgard), an oil-rig worker infatuated by his wife's childish naivete, underscored when the newlyweds first find themselves along and she sheepishly asks, “What do I do?”

Watson, who netted an Oscar nomination for her feature debut, is a revelation in the difficult role of a modern-day saint. Paragons of virtue tend to make boring protagonists, but Watson invests so completely in the character that Bess's stubborn adherence to her world of faith-based imagination is both plausible and endearing. Bess has the audacity to believe she has the right to speak directly to God (no male Church intermediaries required) and that He, in turn, speaks directly to her; in multiple scenes Bess prays out loud and then answers in her version of God's lecturing voice. Sometimes the answers surprise her.

Almost all of Bess's prayers involve Jan to whom she devotes herself completely. Her love and her faith are tested in remorseless Old Testament fashion after Jan is paralyzed in a work accident. She blames herself, in part because she prayed for his quick return home, but more likely because she believes she deserves punishment for the sin of really, really enjoying her first sexual experiences. The medical melodrama takes an unexpected turn when the borderline suicidal Jan, mourning his loss of virility, asks true-heart Bess to take new male lovers and then tell him about her escapades. It's a sadistic proposition (both from Jan and from writer-director Von Trier) to such an innocent, but Bess acquiesces and soon becomes convinced that her trysts are solely responsible for keeping Jan alive. As Jan's condition becomes more perilous, she takes more risks, and has to decide how much she will sacrifice to save him.

The mashup of faith and sex makes some viewers queasy, but Bess's courage is genuinely inspiring, especially in light of the considerable forces marshaled against her: her judgmental and oppressive religious peers (including mom), a medical establishment that diagnoses her as mentally unfit, and perhaps even a God who has written a particularly brutal fate for her. Her only real ally is her sister-in-law Dodo (Katrin Cartlidge), another outsider who loves Bess dearly but still views her as a child who needs protecting; Dodo will fight at her side, but does not share her beliefs. Bess's quest will be a solitary one, but she never waivers in her dedication to it.

As magnificent as Watson is, it is the film's unique style that renders Bess and her perils so riveting. Cinematographer Robby Muller frequently lights the entire set (or uses natural light) and sends the operators with hand-held Super 35 mm cameras to cover the action as it unfolds, giving the actors ample latitude and also creating the sense (simulated as it might be) of events captured on the fly. Von Trier and editor Anders Refn also speak of “cutting on emotion,” ignoring screen direction, continuity, and even production quality (out-of-focus shots and other “mistakes” are proudly left in) in favor of leaping from one emotional high to the next, all the best parts of melodrama with the tedious in-between business excised.

The result is a startling array of images that draws us into Bess's perspective like when she sticks out her tongue under her bridal veil, or when, after first touching Jan's penis on their wedding night, she playfully blows away a tuft of hair in her face, and especially the way she laughs in bed as Jan snores up a storm. A series of conspiratorial looks into the camera only heighten the connection to the viewer, and provide a sense that Bess has a far richer inner life than her friends and family acknowledge.

Though von Trier doesn't promise a happy ending, he may be holding onto a miracle or two, making the last shot of the film one of the most hotly debated scenes in his hotly debated career. “Breaking the Waves” is both a ferocious love story and a tale of the triumph of vital individual faith over ossified and corrupt organized religion. The movie is frightening and cruel and sometimes horribly unfair, just like a lot of Bible tales, but it also one of the most daring undertakings by any modern director and his cast. It was nominated for and/or won a billion awards (approx.) and it's one of the reasons I went to film school. Almost twenty years later (really?), it has only gained in stature. 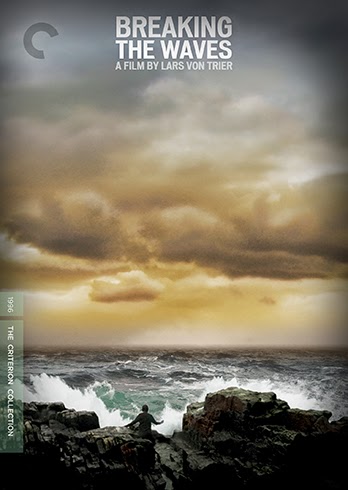 Video:
The film is presented in its original 2.35:1 aspect ratio. The film was shot on hand-held 35 mm cameras with quick movements and has a heavy grainy look. As a result some shots on this 1080p transfer look a bit noisy; the gritty, washed-out look perhaps required some extra digital boosting in spots. However, the film has not been inappropriately prettified and the transfer was personally supervised by von Trier. Aside from that, the high-def transfer looks quite impressive and represents a major change in the way many fans have seen this film. Though “Breaking the Waves” was shot on 35 mm, it always had a distinctly “video” look to it on previously available versions and I think most people just accepted it because the hand-held camera work was more reminiscent of television.

This rich, grainy transfer looks very much like film and Muller's cinematography can be startlingly beautiful at some points, effectively drab at others. Image detail is many levels better than I've ever seen before, a great benefit for the numerous closeups of Bess and other characters. Colors are more vibrant though still rooted in earth tones. Colors really stand out in the chapter breaks, which use digitally enhanced paintings/photographs held for a long time as pop songs from Leonard Cohen to Elton John blast on the soundtrack.

This is a dual-format release. Two DVDs (one with the film, one with extras) are included along with a single Blu-ray. The DVD transfer has not been reviewed here.

Audio:
Criterion's employment of a DTS-HD Master Audio 5.1 track might seem like overkill for a film that sounds mono most of the time, but the music and the sounds at the end use the surround more. Dialogue is mostly clear though accents might prove difficult for some listeners. Optional English subtitles support the English audio.

Extras:
The film is accompanied by selected-scene audio commentary by Lars von Trier, editor Anders Refn, and Anthony Dod Mantle, the Oscar-winning cinematographer who did not shoot this film but did some location scouting for “Waves” and shot other films for von Trier. We get about 47 minutes of commentary which talks about how they edited based more on emotion than anything else as well as other production issues. Though nothing is indicated on the disc, this is the same partial commentary that appeared on a 2003 foreign region release of “Waves.”

In an interview, critic and filmmaker Stig Bjorkman (2013, 10 min.) argues that “Breaking the Waves” is the first film on which von Trier really collaborated with his actors. Criterion also includes new interviews with Emily Watson (2013, 17 min.) and Stellan Skarsgard (2013, 12 min.) as well as an older interview with actor Adrian Rawlins (2004, 2 min.) who played Jan's doctor in the movie. The Watson interview is particularly revealing; she talks about being raised in a strict religious group much like Bess and even says she was shunned as a result of her work on “Breaking the Waves.”

The disc also includes two Deleted Scenes. The first is a scene with Jan in the hospital speaking with his friend Terry (Jean-Marc Barr). This three minute scene would have significantly changed the film as Jan tells Terry he only asked Bess to seek other men so she would be free from him, not because he actually wants to hear her report on her encounters. The second is another version of the scene where Bess runs from a police van; here she stops to visit the doctor and ask for his help.

There are also two Extended Scenes. First is a longer version of the scene in which Dodo accuses Bess of being “stupid.” The extension involves Bess pretending to be able to read the Bible (3 min.) The second is a small addition to the scene in which local children torment Bess; she runs home but her mother won't answer the door. In this scene, we see that Dodo is inside with the mother and also does not answer the door for Bess. All four scenes (Deleted and Extended) have optional commentary by Von Trier, Refn, and Mantle.

One more deleted scene is labeled “In Memory of Katrin Cartlidge.” Cartlidge was a fantastic actress who died in 2002 at the age of 41. This is a one-minute deleted scene selected by Von Trier in tribute to her memory; it features Dodo and Bess laughing in a very somber church service.

We also get a very brief snippet of Emily Watson's audition (2 min.) with optional (and not entirely kind) commentary by Von Trier, Refn, and Mantle.

The extras wrap up with a very short (17 sec) and very funny “promotional film” Von Trier recorded at the request of the Cannes Film Festival and a Theatrical Trailer (2 min.)

The 32-page insert booklet includes an essay by critic David Sterritt and an interview of Von Trier conducted by Stig Bjorkman and originally printed in Bjorkman's “Trier on Von Trier.”

Final Thoughts:
“Breaking the Waves” was the first film in a series that von Trier half-seriously described as his Golden Heart Trilogy. Loosely inspired by a children's book about a heroine who gave away everything to those more needy than her, it also includes his sole Dogme film “The Idiots” (1998) and “Dancer in the Dark.” All feature oppressed heroines (though “The Idiots” is vastly different from the other two) and all are among the best films of the final decade of the 20th century. I like “Dancer” best, but won't argue against any of them. This dual-format release from Criterion provides a robust high-def transfer and a strong collection of extras that do justice to a film that has never really gotten a proper home video release before.
Posted by Christopher Long at 5:08 PM