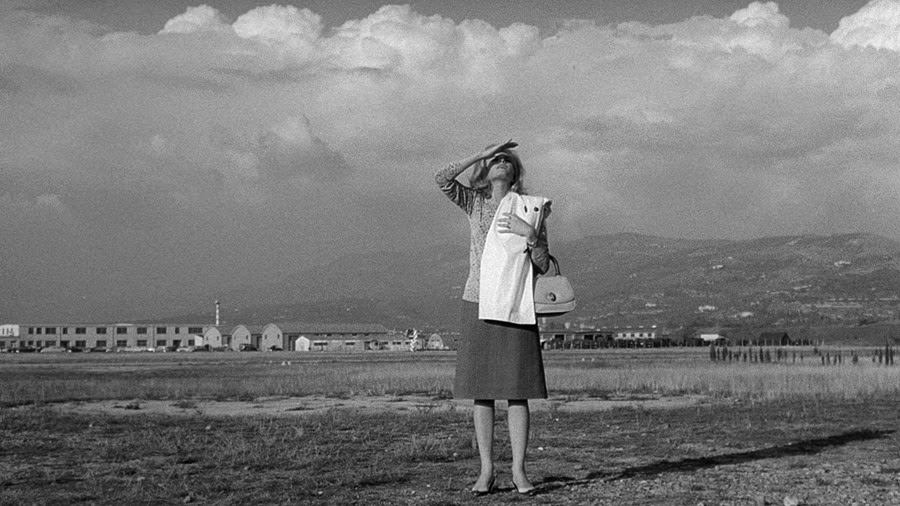 
The poignancy and irony of “L'eclisse” (1962) stems from the fact that the lead character Vittoria (Monica Vitti) searches for something she not only cannot identify but almost certainly wouldn't recognize even if she found it. Her mantra is “I don't know” and it applies not only to answers, but even to motivations. Without a trace of humor, she asks, “Why do we ask so many questions?” She desires... something, and the inability to articulate her need only heightens the desperation to fulfill it.

“L'eclisse” is the third film of director Michelangelo Antonioni's so-called alienation trilogy (a trilogy formed in hindsight by critics and one that could easily find room for a fourth, the 1964 “Red Desert”) and probably its most disconcerting. That's saying an awful lot after the unresolved disappearance at the heart of “L'avventura” (1960) and the death of love in “La notte” (1961), but virtually every frame of “L'eclisse” oozes free-floating anxiety and radical dislocation.

The film opens at the end of the relationship between Vittoria and the vaguely-defined Riccardo (Francisco Rabal). Riccardo is partially obscured by an oversized obelisk-shaped bookend while a small rotating fan behind him spits out an unsettling buzz that dominates the soundtrack; across the room Vittoria reaches through an empty, ornate frame to rearrange tiny items on the desktop. She sighs. There's no point to the activity, but there's also nothing else to do. Nothing to say to each other either, but they'll still say something. Why? “I don't know.”

First world problems, no doubt. Hunter-gatherers haven't yet adapted to the relatively new concept of leisure time, not even the prettiest ones. “L'eclisse” sure has its share of those, as do most Antonioni films. Vittoria eventually falls in with a stockbroker played by Alain Delon, and he and Vitti have two of the most flawless faces that ever shared a screen together. They are truly gorgeousness and gorgeousity made flesh.

In any case, Vittoria's relationship travails are more of an excuse than a narrative structure. Even more than the previous films in the sort-of trilogy, “L'eclisse” meanders along at odd angles and in unexpected directions. Vittoria disappears entirely during a lengthy virtuoso sequence shot at Rome's stock exchange where a moment of silence for a dead colleague consists of a chorus of ringing telephones that remind us that the sacred flow of capital will not be stanched for mere mortal reasons. As usual, architecture plays a role as prominent as the human actors at times, and Antonioni needs no plot-driven reason to linger on a building (particularly one that looks to this fanboy like the Legion of Doom headquarters perched high atop a tower) or a public space. The genuinely disturbing final sequence abandons the protagonists altogether to display the uncaring machinery of Rome lurching into life at night. If it doesn't rattle you, you're deader inside than any of Antonioni's beautiful drifters.

I'm often told that the once uber-fashionable Antonioni has fallen out of fashion somewhat today, though I'm told that exclusively by people who don't share the opinion so I can't judge the accuracy of the claim. I could live with two or three fewer shots of that damned bucket and the leak it springs at the end, but to me “L'eclisse” and all Antonioni films of this era remain as relevant and vital as ever. Exactly what modern cinema movement is supposed to have displaced Antonioni's piercing eye? Mumblecore? Make mine Michelangelo please. 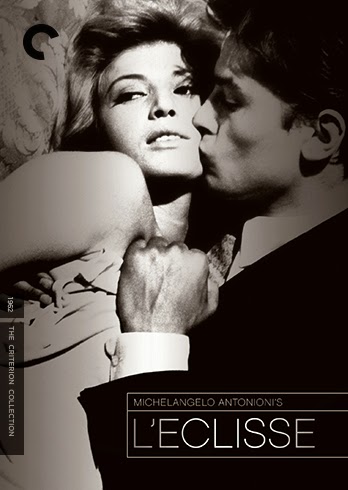 Video:
The film is presented in its original 1.85:1 aspect ratio. The 2005 SD transfer was already a good one, but this transfer has been cleaned up a bit more and, of course, features the usual 1080p upgrade. The black-and-white contrast is rich and moody, and image detail is strong throughout. I spotted a hair or two in the gate along the way, but overall damage is minimal.

This is a dual-release format with two DVDs and a single Blu-ray. I only checked the DVD briefly and it looks as expected – same source as the Blu-ray but with less image detail in SD.

Audio:
The linear PCM Mono track is crisp but somewhat flat. Most Italian films of the time were dubbed (even the Italian-speaking actors) and I assume the same is true here; the dialogue sounds like it's all coming from the same plane no matter where the actors are in the frame, but that's just the way it was made. Optional English subtitles support the Italian audio.

Extras:
Criterion has imported all of the extras from its 2005 SD release.

The film is accompanied by a commentary track by film scholar Richard Peña (please read at the end of the Extras section for more detail), originally recorded in 2004. This is the kind of commentary critics should aspire to, informed and precise in its formal and contextual analysis but accessible to a wider audience. Peña is comfortable discussing Antonioni's framing and also Italian history, making this a fine supplement to anyone looking for a little help with a complex film.

“The Eye That Changed Cinema” (56 min.) is a 2001 documentary directed by Sandro Lai. It includes interviews with Antonioni cobbled together over the span of about forty years from his early work in documentaries to the 1990s dedication of an Antonioni museum in Ferrara, Italy. It's fascinating to see Antonioni's interview persona evolving over time, gaining in confidence over the years.

“Elements of Landscape” (2004, 22 min.) combines two separately recorded interviews with film critic Adriano Aprà and Antonioni friend and collaborator Carlo di Carlo. They cover the usual bases in discussing the director's focus on modern alienation, but this feature could be a good introduction for viewers new to Antonioni's work.

The insert booklet includes an essay by critic Jonathan Rosenbaum, an essay by critic Gilberto Perez about Antonioni's multi-film collaboration with Monica Vitti, and two excerpts of Antonioni writing about his work, one from a piece originally published in the Spring 1962 issue of “Film Culture” and another from the 1963 collection “Screenplays of Michelangelo Antonioni.”

This is a dual-release format which includes two DVDs (with film and extras) and a single Blu-ray. The content should be identical. However, due to an error, the commentary track on the DVD is actually the commentary track from Criterion's recent release of Don Siegel's “Riot in Cell Block 11.” Due credit to Chris Galloway at CriterionForum.org for pointing this out because I admit I would not have checked it on my own, but I can confirm that it wasn't just his copy.

Film Value:
“L'avventura” remains my favorite Antonioni, but “L'eclisse” isn't all that far behind. This Criterion Blu-ray upgrade looks great and features substantive if not extensive extras. The mistake with the DVD commentary track (see Extras above) is worth noting, but since it's a dual-format release you still have access to the correct commentary on the Blu-ray.
Posted by Christopher Long at 11:36 AM