Welcome to DVDBlu Review. Thank you kindly for your interest. Let me explain what this very new and rapidly growing site is about so you can decide if you'd like to stick around.

My name is Christopher S. Long and I've been writing film reviews for over ten years. I'm a member of the Online Film Critics Society and I've written for Cineaste magazine, DVDBeaver, and other print and online publications in the past. You may have seen my reviews posted at Rotten Tomatoes, or maybe you haven't. The main site I wrote for this past decade, which I am not inclined to name at the moment, was abruptly pillaged by Vikings and burned to the ground recently along with all my work. From its ashes springs DVDBlu Review.

I have two primary goals at this site: to restore a decade's worth of my writing to the internet, and to continue coverage of some of the best new DVD and Blu-ray releases. I have reviewed nearly 500 Criterion titles as well as many great releases from Milestone Films, Kino Lorber, Zeitgeist, and other top labels over the past ten years; I will gradually add these older reviews to the site while also providing weekly coverage of new releases and other relevant news. The content will definitely skew to the so-called “arthouse” rather than blockbusters and I aim to be selective rather than comprehensive. Every now and then I'll slip in a new theatrical review as the spirit moves me, but the focus here will be on those shiny discs we love so much.

Having said that, my primary interest is in the films themselves, not the technical specs of each disc. I will discuss the video, audio, and extras for each release, but this is not going to be the site to talk about bit rates or to wage battle over the righteousness of a 1.78:1 vs. a 1.85:1 aspect ratio.

Please don't be intimidated by the flurry of posts in March 2015. That's just me revving the site from 0 to 60, posting a year's worth of reviews before officially launching this blog. The pace will slow down from that as I focus more on new coverage but I will be adding older reviews as well as new features such as director spotlights, “Best Of” lists, and more.

I hope you like what you see. If you do, tell twenty of your friends. If you don't, just keep it between you and me. 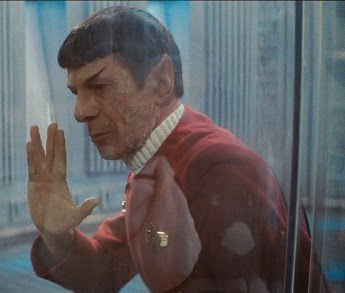 More Vital Information About The Author:

My favorite directors are Stanley Kubrick, Werner Herzog, Robert Bresson, and Jean-Luc Godard. I will always have a special place in my heart for documentaries and especially for the films that blur the lines between fiction and non-fiction. The first time I remember crying at a movie was when Spock died, and I just cried again when Leonard Nimoy died. Aside from Spock, Jeanne Dielman is my one true love.
Posted by Christopher Long at 7:14 PM