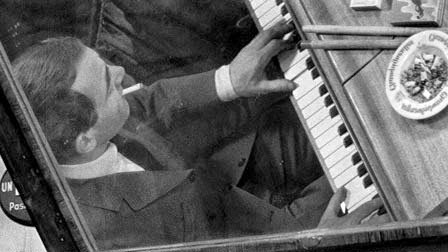 (I originally wrote this review way back in the ancient time known as 2005. I would change some things today but I decided to leave it as is aside from a minor clean-up. This is posted to accompany Criterion's March 10, 2015 Blu-ray release of Truffaut's "The Soft Skin.")

Truffaut fell in love with David Goodis's pulp pot-boiler "Down There" and chose to adapt it as the follow-up to his enormously successful debut film, "The 400 Blows" (1959). Like most of his fellow New Wave directors, Truffaut loved Hollywood noir and crime films, but he also despised gangsters which makes for an interesting mix. In "Shoot the Piano Player," Truffaut begins with all the typical trappings of the gangster film but uses the film to turn the genre on its head.

Charlie Koller is at the heart of this subversive effort. A handsome man and a gifted musician, Charlie should be a smooth-talking ladies' man. Instead, when he walks home with Léna (Marie Dubois), a pretty waitress from the bar where he plays, Charlie interprets every little gesture she makes. Does she like me? Should I hold her hand? Just as he steels himself to act, she is gone. He's no Humphrey Bogart. Gangsters Momo (Claude Mansard) and Ernest (Daniel Boulanger) are out to get both Chico (who ran off with the money from a robbery they pulled off together) and Charlie, but they are anything but your standard tough guys. They're just your garden variety criminals: lazy, a little dim, and also not entirely evil. In fact, when they kidnap Charlie's little brother Fido (Richard Kanayan), they wind up making friends with him. 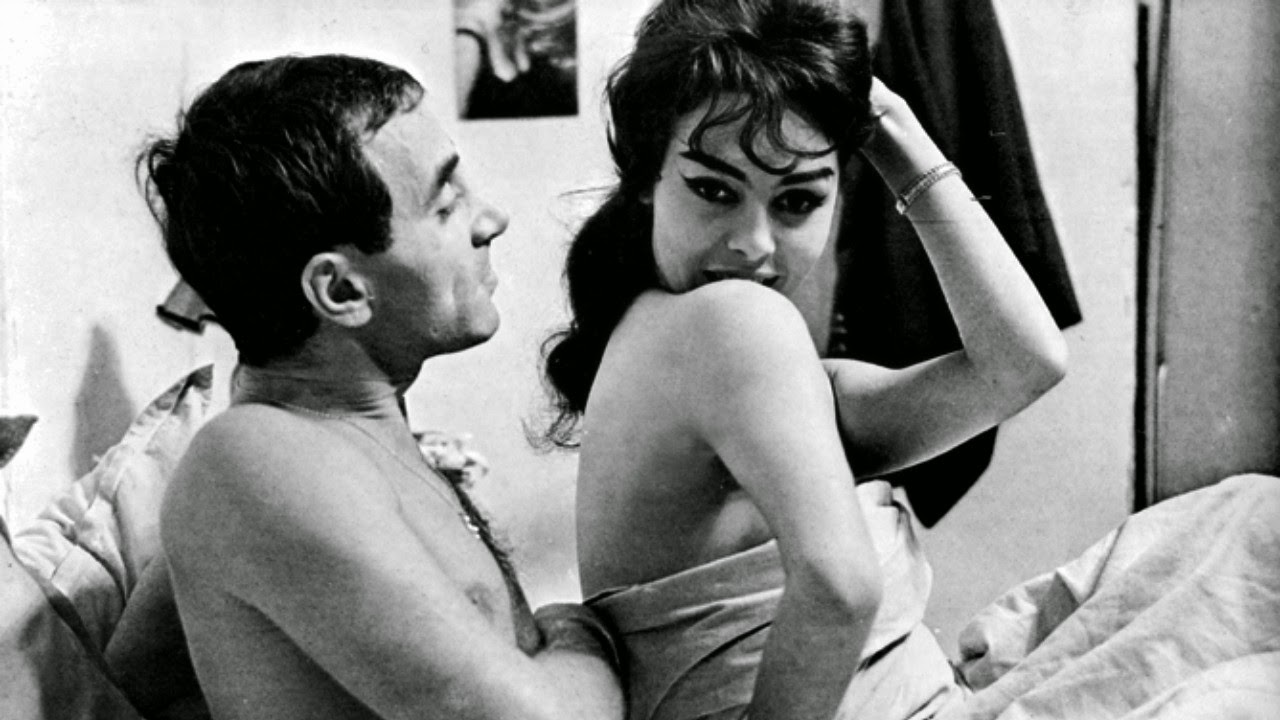 Like a good Elmore Leonard novel, the plot of "Shoot the Piano Player" is dynamic and fluid. The characters are not merely pawns in a pre-determined narrative. Momo and Ernest force Charlie and Léna into a car. The four of them strike up a conversation to pass the time during the drive and even share a good laugh together. Léna jams her foot down on the accelerator, which prompts the police to pull over the car. As Momo and Ernest deal with the police officer, Charlie and Léna hop out of the back of the car and wave good-bye to their "friends." The gangsters shrug; time to come up with another plan. They have no choice but to react to events as they develop which sounds an awful lot like real life.

Truffaut's film is not as formally experimental as Godard's "Breathless" (1960), but it still exhibits the anarchic spirit of the early New Wave films. One of the niftiest effects in the film is a triptych shot of sleazy bartender Plyne (Serge Davri) as he sells out Charlie to the hoods. Cinematographer Raoul Coutard combines his hand-held "documentary-style" camera from "Breathless" with more standard film techniques, creating a hybrid style that really sizzles in glorious Cinemascope. The gorgeous black-and-white photography is crucial in establishing the ambiance of the neo-noir world Truffaut has created, as is the catchy jazz score by frequent Truffaut collaborator Georges Delerue.

At the heart of the film is Charles Aznavour's indelible performance. Aznavour was an accomplished actor/singer/songwriter (though, ironically, not a piano player) whose career was too diverse for him to ever be identified as a New Wave icon like Jean-Paul Belmondo. Regardless, his performance in "Shoot the Piano Player" is as great as any in the early New Wave films. Aznavour, thirty-six at the time, has a world-weary face that reflects the tragedy that turned Eduardo Saroyan into Charlie Koller, but a smile that shows the gentle nature at Charlie's core. Charlie has had his fill of pain: he doesn't want to hurt anyone and, in turn, doesn't want to be hurt by anyone else. Aznavour captures the sensitivity and vulnerability of this complex character with the apparent ease that only stems from hard work.

If "Shoot the Piano Player" has any major flaw, it is the ending which I find to be a contrivance that does an injustice to one of the film's major characters. This is a minor complaint, however, in a film which amply demonstrates Truffaut's easy, naturalistic command of film language. I have never quite warmed to Truffaut the way I have to Godard and Resnais, but I have no reservations regarding my fondness for "Shoot the Piano Player," his breezy, free-form masterpiece which combines the best features of classic Hollywood with the very best qualities of the most vital and exciting film movement in cinema history. 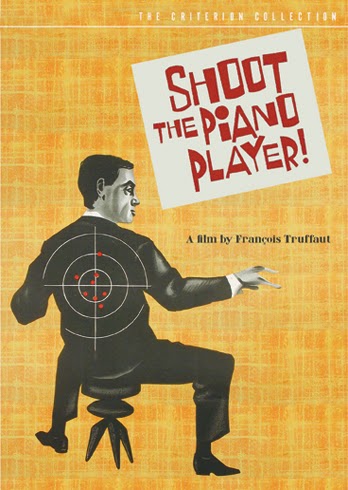 Video:
The film is presented in its original 2.35:1 aspect ratio. "Shoot the Piano Player" is actually shot in Dyaliscope rather than Cinemascope, but as far as I can tell there is no meaningful difference between the two. Perhaps someone will correct me on that. No DVD or television screen can do justice to this format, but the transfer gives you a taste of the power of long takes and compositions actually designed to take advantage of the entire field of vision. Criterion's high-digital restoration is superb, as usual.

Audio:
The DVD is presented in Dolby Digital Mono. Georges Delerue's score sounds great, and all hisses and pops have been buffed out in the audio restoration. Optional English subtitles support the French audio.

Extras:
This two-disc set from Criterion offers a variety of extras.

Disc One includes the restored transfer of the film along with a feature-length audio commentary by film scholars Peter Brunette and Annette Insdorf.

-Two interviews with François Truffaut: The first is an excerpt from the 1965 French television show "Cinéastes de notre temps" (9 min.) in which the director answers a standard set of questions. The second is from a 1982 program called "Pour changer étoiles et toiles" (12 min.) in which Truffaut discusses his adaptation of the David Goodis novel.

-Interviews with Charles Aznavour (24 min.) and Marie Dubois (10 min.): Both of these were recorded in August 2005 especially for this Criterion release.

-An interview with Raoul Coutard (14min.): Recorded in Paris in 2003, this is the most interesting of all the interviews. Coutard is always a fascinating speaker.

-An interview with Suzanne Schiffman (15 min.): Recorded in April 1986, this interview with Schiffman, who worked with Truffaut in many capacities throughout his career, was originally intended for a separate documentary but went largely unseen. Criterion acquired the original footage and edited the interview down to its current form.

While each of the features here is of some interest, the collection is missing a real meaty feature which provides analysis or context for the film like Babette Mangold's documentary on Criterion's "Pickpocket" or the numerous stellar features on Criterion's re-release of "M."

Final Thoughts:
As the 2002 Sight and Sound voting shows, "The 400 Blows" and "Jules and Jim" (1962) are Truffaut's most critically praised films. I beg to differ. "Shoot the Piano Player" is easily my favorite Truffaut, but I also recommend both "Day for Night" (1973) and "The Bride Wore Black" (1968). "Bride" will be of particular interest to Tarantino fans. Jeanne Moreau plays a woman known only as "the Bride" who seeks revenge on the men who killed her husband; she crosses their names off a list after she dispatches each one. Sound familiar?
Posted by Christopher Long at 8:58 PM