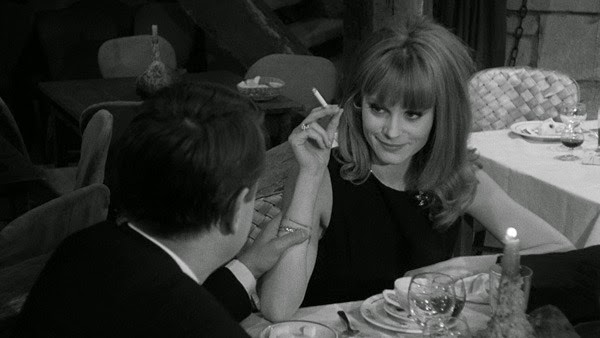 
Pierre Lachenay can only do it in the dark.

The unassuming, middle-aged literature scholar (played by the unassuming, middle-aged Jean Desailly) kisses his lovely wife and daughter goodbye to hop a plane to Lisbon to deliver a lecture on “Balzac and money.” On the plane he steals a few glimpses at one of the stewardesses, taking particular note of her changing into high-heel shoes while otherwise obscured by a curtain.

Later he shares a hotel elevator with her and takes note of what room she enters. Returning to his room, he sits down on the bed in the dark and dials her room, inviting her for a drink. Only after the call is complete does he flick on the desk lamp; he could not bear to look until the deed was done. The affair has begun in shame and it doesn't take much to guess it will end just at a similarly low point. 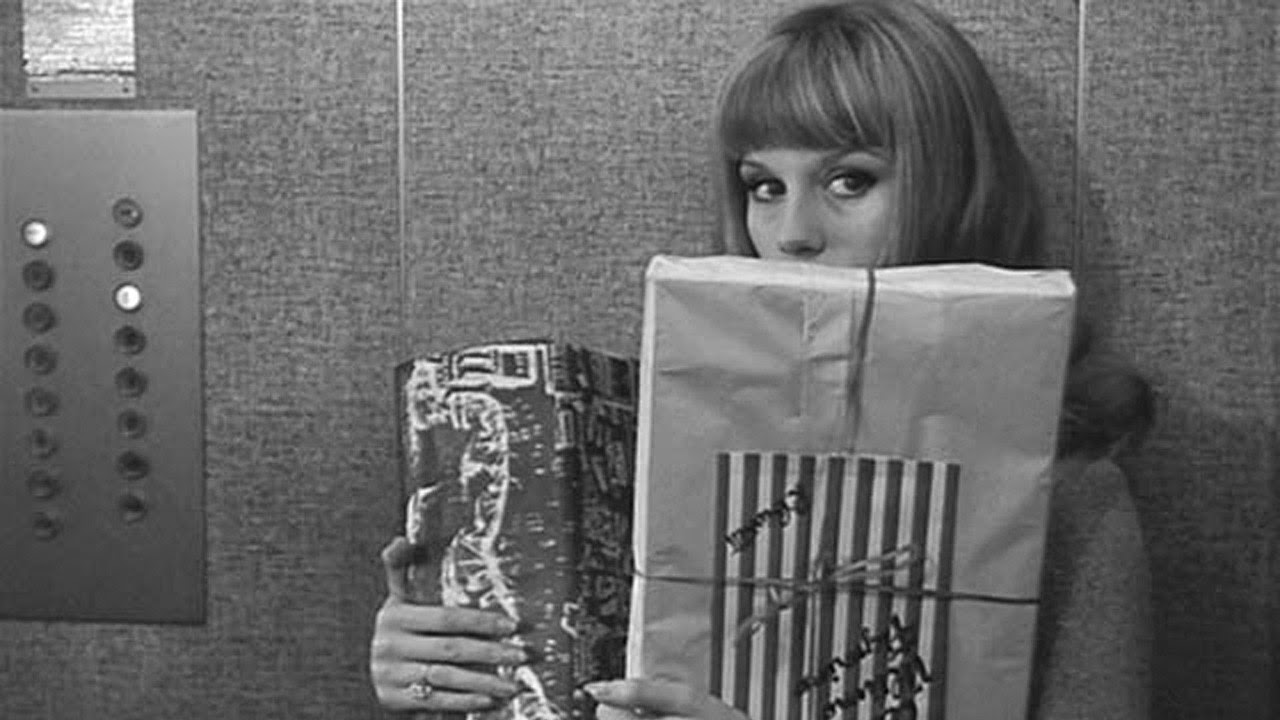 Not that Pierre sees much even in better lighting. Sure he settled on a fine target for his affections in Nicole, but it would be difficult for anyone not to notice the radiant beauty of actress Françoise Dorléac (older sister of Catherine Deneuve). Pierre, however, seems to be oblivious to virtually everything else about Nicole. Fortunately, the same is not true of François Truffaut, writer-director of “The Soft Skin” (1964).

While driving Nicole to one of his speaking engagements (on Andre Gide this time) in Reims, Pierre notes that while her wearing blue jeans does not bother him per se, he does prefer to see her in a nice dress. While Pierre pumps gas, Truffaut has the camera linger in the car to observe Nicole as she contorts herself to reach into the back seat, yanks a dress out of her luggage, then slips away to change. This shot has two effects, the first of which is to provide indisputable documentary evidence that Françoise Dorléac looks fantastic in those blue jeans. The second effect is that we closely observe the effort Nicole expends to conform to her lover's ideal; for Pierre, who only notices the aftermath, she has simply magically transformed into his special princess. Life's so easy for Pierre!

The trip to Reims is marked by disappointed and dishonesty from the get go. Pierre forces Nicole to read deep into a list of best area hotels before settling on one sufficiently away from prying eyes. Once there, he attends to his professional duties, albeit with near total contempt for all attendees, while leaving Nicole to lounge about the hotel. She even has to buy her own ticket to the lecture and then gets shunted aside once again when the ticket taker informs her the event is sold out. Pierre cannot even acknowledge Nicole on the street while he is in the company of a colleague. Shame, shame, and more shame. Pierre isn't cruel, it's just that his needs are paramount to Nicole's. Come to think of it, Pierre is pretty cruel. 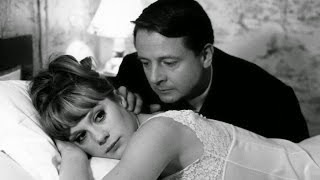 A poster advertising Pierre's lecture is defaced by graffiti. Despite my preceding commentary, I'm not certain Truffaut intends to do the same thing to his protagonist. There's a certain affection in the portrayal of a Balzac specialist so famous he is greeted at the Lisbon airport by a horde of photographers (later on we learn that people know Pierre “from TV” which explains a bit.) Pierre is no practiced Lothario either; whether or not this is his first affair is uncertain, but the film goes to great lengths to paint a convincing, naturalistic portrait of a weary traveler who spend many lonely nights on the road and makes an awkward attempt to connect with someone else.

On the other head, Pierre is a weasel whose cowardice extends to all facets of his life. He promises a colleague a ride back to Paris then ditches him; Pierre does not care about being rude or inconsiderate, only in being directly confronted while doing so. He lies point blank to his wife (Nelly Benedetti), who has no intention of being “sophisticated” about the whole adultery thing, until he can no longer do so and does his best to avoid facing any consequences. That he cannot avoid said consequences forever (the film's denouement is quite definitive on this point, but I won't spoil it here) is a reminder that we are firmly in genre territory, or at least on a genre bordering on noir and the crime film. Pierre has, in effect, pulled off a daring heist and the code dictates he must be punished for it. Much has been made of the fact that Truffaut shot this film while he was also finishing his landmark interview book on Alfred Hitchcock (one of a handful of books that can reasonably be said to have altered film history) but exactly how Hitchcockian the movie is is a subject open for debate (and which, indeed, is debated in some of the extras on this Criterion disc.)

“The Soft Skin” was a bit of a departure for Truffaut who was riding the crest of his personal New Wave after the remarkable string of “The 400 Blows” (1959), “Shoot The Pianist” (1960), and “Jules and Jim” (1962). “The Soft Skin”, with its middle-aged family man protagonist, wasn't aimed at the youth culture demographic like so many other landmarks of the movement, though it does feature the crisp, agile black-and-white photography of Wave-defining cinematographer Raoul Coutard and an expressive score by stalwart Truffaut collaborator Georges Delerue.

The decidedly unhip Pierre Lachenay isn't a romantic rebel, but a failed husband and father who tries to hide his discretions under cover of darkness or even in plain view as necessary. Perhaps that explains why the movie was mostly a commercial and critical flop on its release. “The Soft Skin” has since gained its share of boosters over the past fifty years. I don't know if it's one of Truffaut's best (and I think the ending is a miscalculation, though many disagree), but it is a tautly told, subtle “caper” film and a convincing portrait of a very flawed man. 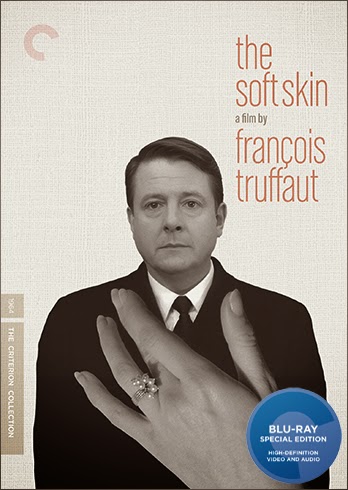 Video:
The film is presented in its original 1.66:1 aspect ratio. According to the Criterion booklet, the film was scanned “from the 35 mm original camera negative at Digimage in Paris, where the film was also restored.” The film has a strong grain structure which enhances its naturalistic feel and the high-def transfer really shines in the darker scenes (both indoors and outdoors) where a great deal of detail is visible. Black-and-white contrast isn't very sharp, but I don't think it's supposed to be.

Audio:
The linear PCM mono track is crisp and distortion-free, though best described as efficient rather than dynamic. The sound design in this movie is rather odd. Delereu's score swells menacingly in scenes where little to nothing happens (such as a car ride to the airport) but long stretches of the film are music free with just a few hollow, isolated effects like echoing footsteps, doors opening, etc. Optional English subtitles support the French audio.

Extras:
Criterion has offered a modest but interesting selection of extras on this disc.

The film is accompanied by a commentary track by the film's co-screenwriter Jean-Louis Richard and Truffaut scholar Serge Toubiana. It was originally recorded in 2000 and is in French; you can select option 2 of 2 under subtitles to get English subs for the commentary. Of course this makes it awfully difficult to watch the movie as well and I'll admit I only spent a few minutes with this option.

The best feature on the disc is a new video essay titled “The Complexity of Influence” by the great critic Kent Jones. It only runs 12 minutes but Jones packs in a lot of points. The title of the piece stems from Jones's attempt to suggest that it's a bit too easy merely to say that Truffaut was “influenced by Hitchcock” as has often been the case. Rather “influence” is more a matter of absorption and then re-processing. He also covers other points including some biographical information about Truffaut's childhood and subsequent close relationship with father figure Andre Bazin.

“Monsieur Truffaut Meets Hitchcock” (1999, 30 min.) is a documentary piece by film historian Robert Fischer which provides an overview of Truffaut's interaction with Hitchcock from initially proposing his book idea to Hitchcock to the publication; it opens with Truffaut speaking at the Oscars in tribute to Hitchcock.

We also get an 11 minute excerpt from a Dec 1965 episode of the French TV show “Cinéastes de notre temps” in which Truffaut discusses the genesis and development of “The Soft Skin.”

Final Thoughts:
“The Soft Skin” hasn't exactly been forgotten but it has often been eclipsed by Truffaut's other early-to-mid '60s work. As far as I know, it was previously only released in North America over 15 years ago on a non-descript DVD, so this high-def deluxe treatment of Criterion is a welcome addition to the collection.
Posted by Christopher Long at 9:09 PM