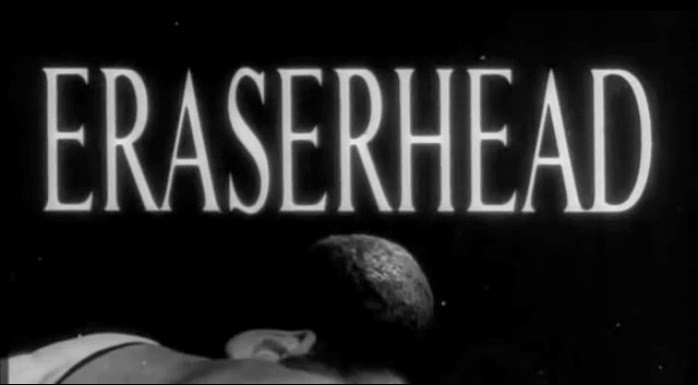 David Lynch's debut feature, painstakingly shot over five years while he was a student at AFI in Los Angeles, became an unlikely smash hit on the midnight movie circuit, playing on a weekly basis for many years back in a golden age of exhibition when such a thing was still possible. Of the many movie-goers who packed theaters for late-night screenings, no two could possibly have had the same experience, but the experience they had was certainly unforgettable. The film also generated considerable return business from audience members who wanted to figure just what the hell was going on in the movie. Maybe the tenth time will make sense.

Was “Eraserhead” a dream (nightmare), a love story, a tour through hell (sorry for the redundancy), a sex comedy (it starts with a guy blowing his load, after which hijinks ensue), a horror film, a morality play, weird for the sake of being weird, or just a great excuse to get stoned and watch a movie? Lynch has wisely remained coy on the subject, suggesting only that he has never heard anyone come up with his interpretation of the movie. 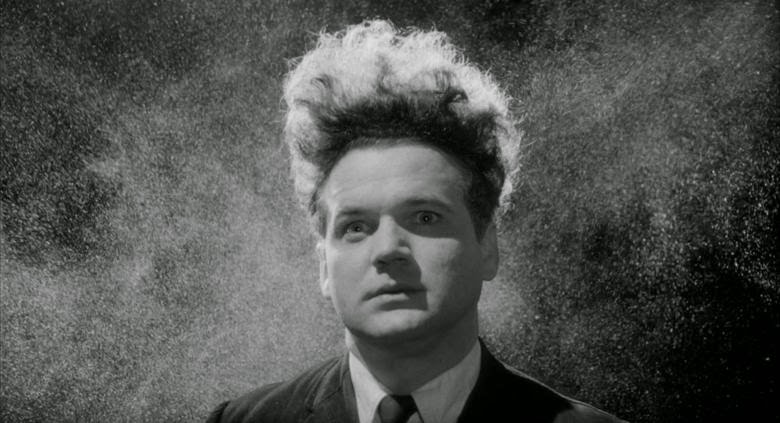 Henry Spencer (Jack Nance) lives in a rundown apartment in the midst of a hollowed-out industrial neighborhood inspired by Lynch's unhappy years in Philadelphia (which he described as “a city filled with fear”) but cobbled together from deserted locations in Los Angeles. The city of the film, however, with its giant tunnels and inexplicable matrices of dirt mounds, has no obvious real-world equivalent which makes it a perfect setting for a story that defies real-world explanation.

Henry marries Mary (Charlotte Stewart). That's simple enough. Things get complicated, however, when their tryst (depicted obliquely in a prologue which involves Henry floating in space and a giant sperm shooting out of his head) produces... something. If there's a line that sums up the film's unique blend of grotesque horror and absurdist black humor, it's when Mary's mom informs Henry that her daughter has given birth to his baby. Mary clarifies, “Mother, they're still not sure it IS a baby.”

I'd rather let you discover the baby for yourself. It's one of cinema's most indelible creations. Suffice it to say that both Henry and Mary are challenged by the responsibilities of parenthood, prompting Mary to panic, and Henry to attempt to cope with a child who never stops crying, an amorous neighbor, a woman who lives in his radiator, and a sequence in which the title of the film is acted out more literally than you would imagine possible. Unless you're David Lynch. 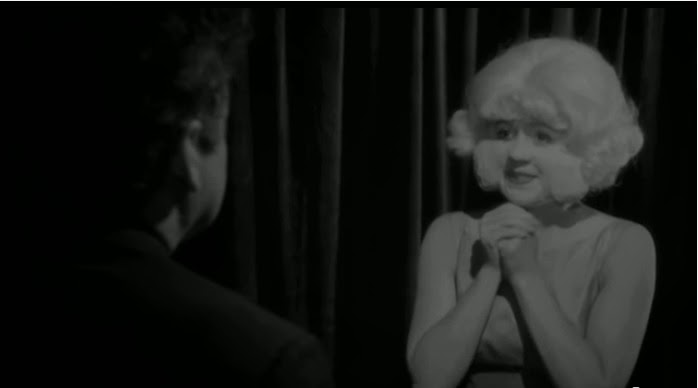 Rather than fussing about what it all means (though it's surely an ad for responsible birth control), it's better to focus on the experience of seeing and listening to “Eraserhead.” Shot in inky black-and-white (mostly by cinematographer Frederick Elmes, though Herbert Caldwell put in several months on the lengthy, low budget project at first) the film is sculpted out of blocks of stark light amid pools of impenetrable darkness. As bleak and disturbing as the factory exteriors are, the interior space seem aggressively designed to derange the senses; Henry's window looks out onto a brick wall only an inch or two from the pane. The most remarkable sight of all is not a set, but actor Jack Nance with his amazing mountain of hair, a frizzy rectangle slouching atop his vast mountain slope of a forehead, all of which attracts even more attention to his darting, eerily attentive eyes way down below. Those desperate eyes hint at a mind even more disoriented than the viewer's, making Henry a strangely sympathetic figure in a film that offers few other conventional access points for the audience.

While the movie offers a gallery of vivid images, its sound design is its truly unique marker. Lynch and sound designer Alan Splet spent a year in post-production, layering on effects. The SDH subtitles on this Criterion disc spell out some of the most prominent ones: [MACHINERY CLANKING] and [STEAM WHOOSHING]. But it's the low rumbling room tones that fill the aural landscape and burrow right into the listener's subconscious. “Eraserhead” moves me to tears at times and I am convinced it's the immersive low-pitched sounds that scamper right past my higher reasoning centers to tug on the reptile portions of the brain. Add in the heavy use of pipe organ music by Fats Waller and “Eraserhead” becomes the film you'll never forget hearing even more than the one you'll never forget seeing.

Whether all or any of it works for you is something you'll have to find out on your own. I find it hard to believe one could not have a strong reaction of some kind to the movie. Rapture or anger, that's up to you. Just savor the emotion and stick your inner interpreter in the corner for a long time out. 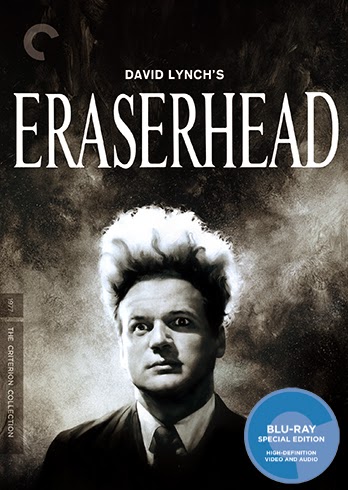 Video:
The film is presented in its original 1.85:1 aspect ratio.

I'm tempted to leave it at that, but in case you need more, this high-def transfer from Criterion is extraordinary. I guess there's no such thing as a film that doesn't benefit from a high-def treatment, but “Eraserhead” in 1080p is a revelation for those of us who have never had the chance to see it on anything but VHS or DVD. This transfer, supervised by Lynch, is very dark, but it's meant to be. The benefit of the high-def transfer is that you can see so much detail in the dark scenes. In the film's signature shot, Henry stands in front of a cloud of (eraser) dust billowing around him and it's like you can pick out each speck. The patterns on the floor, the stage, the sheets – oh my. And yet those darkest spaces remain impenetrable as they should; the contrast is so beautifully rendered the blacks just look achingly and infinitely black. This is one of the best transfers from a company known for the best transfers.

Criterion has stopped their dual-format releases so this contains just a single Blu-ray disc, no DVDs.

Audio:
The film's original sound mix was monaural but in 1994 Lynch and Alan Splet created a stereo mix from the original recording. Criterion has stayed true to this with a linear PCM 2.0 audio track. AS noted above, the audio design is essential to this film. It's hard to say just how true to the theatrical experience this is, but the mix is sharp and resonant. The prominent low-frequency tones are well-preserved. The film's minimal dialogue also has an appropriately hollow sound almost as if it's coming from a different space than we otherwise hear, a neat effect. Optional SDH English subtitles support the English dialogue and so some heavy lifting in cataloging the film's many unique sound effects.

Extras:
Good news and bad news. The bad news is if you shelled out big bucks for that “Short Films of David Lynch” DVD back in 2002, they've almost all been duplicated on this Criterion Blu-ray and in new high-def transfers. The one film from the old set that isn't included is “The Cowboy and the Frenchman,” Lynch's segment from the portmanteau film “The French As Seen By...” (1988).

However, we get the other five each with short introductions by Lynch. The first Lynch's early student film “Six Men Getting Sick” (1966), a one-minute animation loop repeated several times. Next is “The Alphabet” (1968, 4 min.), mostly animated and entirely awesome. “The Grandmother” (1970, 33 min) was Lynch's first lengthier film and proved an effective calling card for his tenure at AFI. “The Amputee” (1974, 4 or 5 min.) is presented in two versions of slightly differing lengths and was basically a footage test that Lynch turned into a creepy exercise. Finally, “Premonitions Following an Evil Deed” (1995, 1 min.) is Lynch's short segment of the film “Lumiere and company” which assigned modern filmmakers the task of shooting on the original camera and film emulsion used by the Lumiere brothers a century before.

The rest of the extras are listed under the Supplements section by year. “1977” is a 46 second Trailer for the movie. “1979” is an interview with Lynch and cinematographer Frederick Elmes, conducted by filmmaker Tom Christie for his television production class. It runs 17 minutes and features a typically evasive Lynch discussing some of the production background (but not meaning) of the movie.

“1982” is a Trailer (1 min.) that was played at The Nuart in Los Angeles ahead of the film's midnight screenings. Lynch sits on a couch with five Woody Woodpecker stuffed dolls (none of whom are named Woody) and thanks the audience for coming. “1988” shows a segment from the French TV show “Cinema de notre temps” (recorded in 1988, broadcast on Apr 23, 1993) in which Lynch and actor Jack Nance drive through Los Angeles on their way to the exterior location where Henery walks into a huge tunnel. They talk about tuna melts.

“1997” provides an interview (16 min.) with Lynch, Nance, actress Charlotte Stewart and director's assistant Catherine Coulson as they revisit the AFI locations at which the movie was shot and edited. The interviews were conducted by Toby Keeler for the 1997 documentary “Pretty as a Picture: The Art of David Lynch.”

“2001” gives us the lengthiest extra in the collection, the documentary “Eraserhead Stories” (85 min.) David Lynch directs and mostly talks over clips (we also see him seated by a big radio microphone) from the movie. If you're familiar with the film's background, there's nothing revelatory here and it's a bit dry, but still worthwhile.

“2014” gives us the material newly recorded by Criterion for the release, 26 minutes of intercut interviews with Coulson, Elmes, Stewart, and actress Judith Anna Roberts.

The 64-page squarebound insert booklet has several gorgeous photos and includes a lengthy interview of Lynch by Chris Rodley from his 1997 book “Lynch on Lynch.”

Film Value:
Not bad for a student film, huh?
Posted by Christopher Long at 5:09 PM