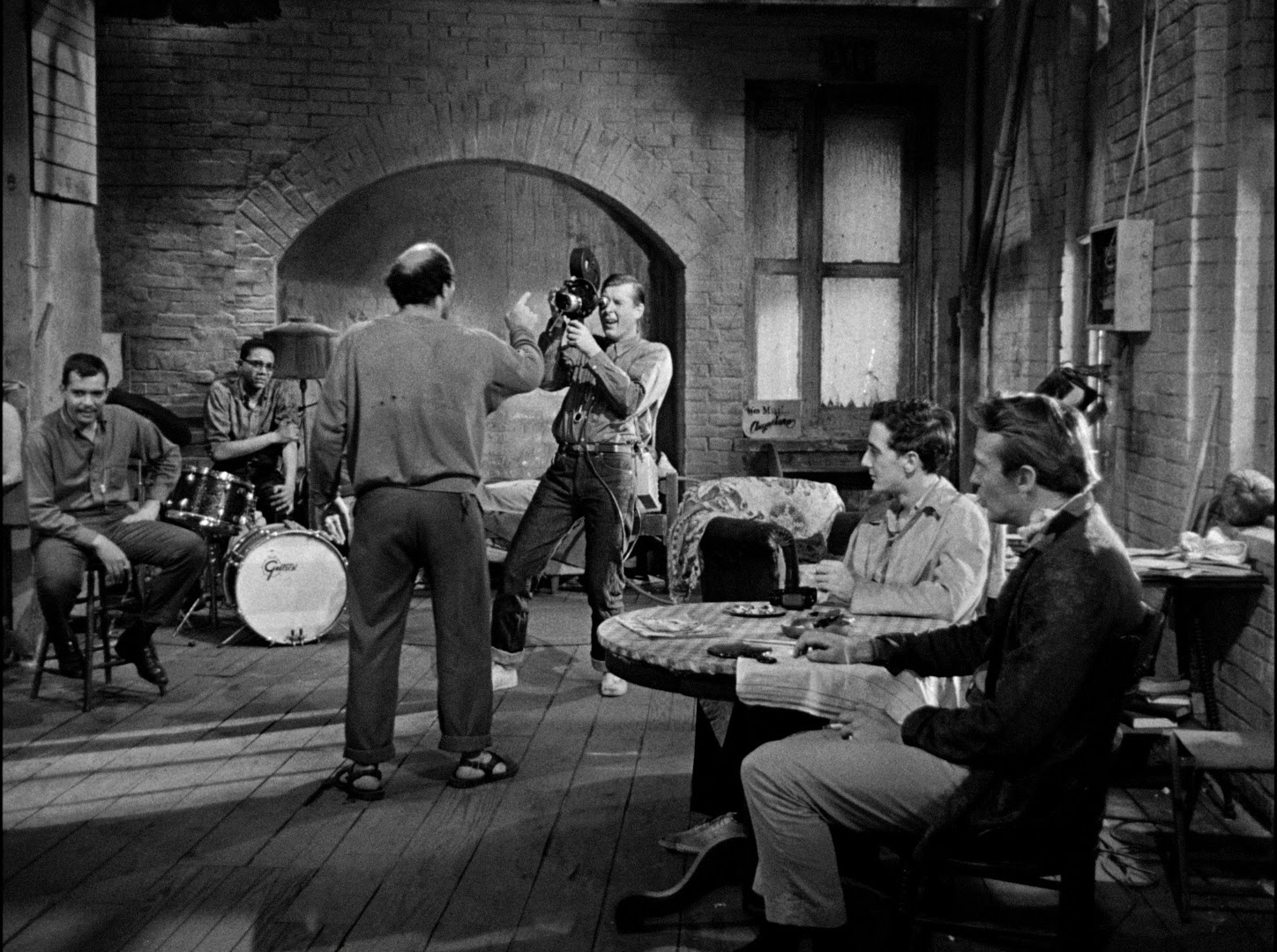 
At the very least, director Shirley Clarke's debut feature “The Connection” (1962) creates an indelible sense of time and place. A handheld camera explores every nook and cranny of the vast but rundown New York City loft inhabited by a dozen or so drug-addicted jazz musicians eagerly awaiting their next heroin fix: “Is Cowboy back yet?” A chintzy checkerboard table, a ratty cot and a rusted potbelly stove are nearly all that break up the floor space otherwise devoted to the piano and drum kit around which the musicians spontaneously break out in performance every now and then. Branching off from the main room are a kitchen partly cordoned off by a curtain and a never-glimpsed bathroom which serves as the mini-Mecca to which each junkie makes his own pilgrimage for his desperately needed hit.

In a film shot more or less in real time over nearly two hours, this constructed set feels like a very lived-in space on a very specific afternoon, an impressive enough accomplishment on its own, but Shirley Clarke had far greater ambitions for her project. Clarke was a founding member of a recent film cooperative (along with luminaries such as Richard Leacock and Albert Maysles) that helped to refine some of the principles of early cinema verité in America, but she was never comfortable buying into the overblown truth claims that would emerge about the desirability or even the possibility of objectivity in documentary filmmaking.

Jack Gelber's play “The Connection” provided the perfect source for Clarke to adapt into a critique of said truth claims. Gelber's play was about drug-addicted Greenwich Village jazz musicians but also featured a (fictional) director and playwright on stage as well as pre-planned audience interaction to add multiple levels of reflexivity to the proceedings. It wasn't a huge leap for Gelber's film script to rejigger the story to frame the movie as a documentary being shot by a director and a cinematographer trying to capture the “truth” about junkies.

The film actually kicks off with a printed statement read by “camera man” J.J. Burden who claims that documentarian Jim Dunn put the footage in his care and that Burden edited it “as honestly as I could.” It's soon apparent that the word “honest” is intended ironically. The film quickly doubles down on this theme when, after spending a little time listening to his somewhat histrionic subjects, director Dunn (William Redfield) jumps in front of the camera to order the addicts to calm down and act natural because he's “just trying to make an honest human document” and, gosh darn it, he knows “something about Eisenstein and Flaherty.” To my taste, the film's weakest point is the over-stacking of the deck against a director shown to be a clueless blowhard from the get go. But direct cinema was in its first blush as the ascendant documentary paradigm in America, and it appears that Clarke was eager to prick its bubble before it had a chance to fully inflate. 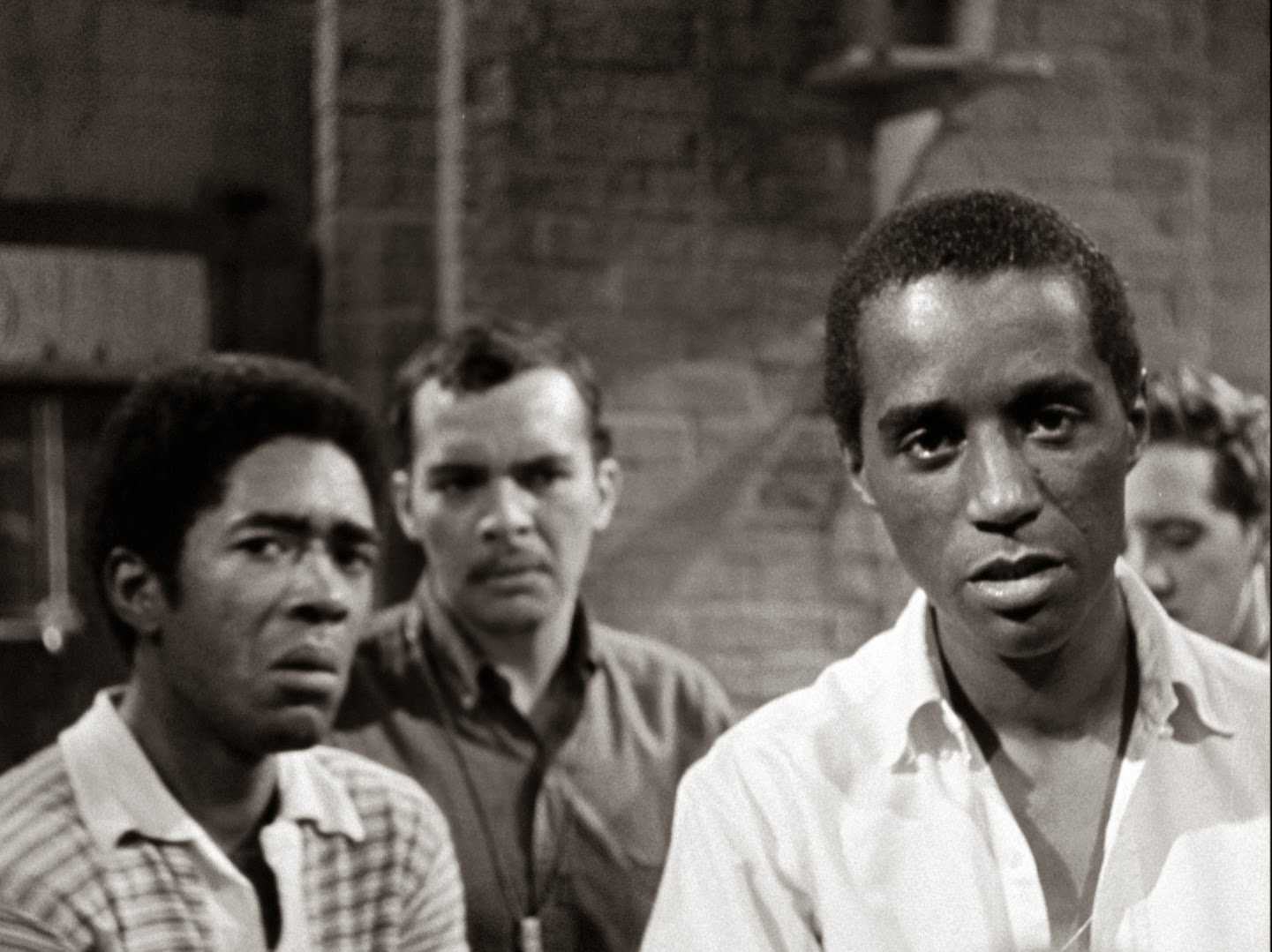 Cinematographer J.J. seems much more sensible from his perch behind the camera but even he is pulled in front of the camera at one point (and lo and behold, it's the great Roscoe Lee Brown in his first film role!) to emphasize that he's no objective observer either. One of the African-American musicians also taunts J.J. about working for a white director, “Is your name gonna be on this film?” Clarke was juggling quite a few balls with her deceptively modest debut.

As the day wears on, each of the cast members holds court for the camera at some point, mostly reminding Dunn that he has no idea about the reality about their everyday life is and that pointing a camera at them for a few weeks won't get him or the audience any closer to it. The stage-intense performances sometimes play a bit too big in front of a camera, but they establish the ebb and flow that determines the film's cyclical rhythm. Frantic harangues yield to drowsy slumping as the players crash while waiting for Cowboy (Carl Lee) to return to the apartment with their new supply; fresh-sliced pineapples can only provide enough energy to bridge the briefest of gaps while they wait. Fortunately they have enough oomph to break into some fabulous jazz numbers from time to time with a score composed by the great Freddie Redd; Redd and several other major jazz performers of the time work in the cast and jam. 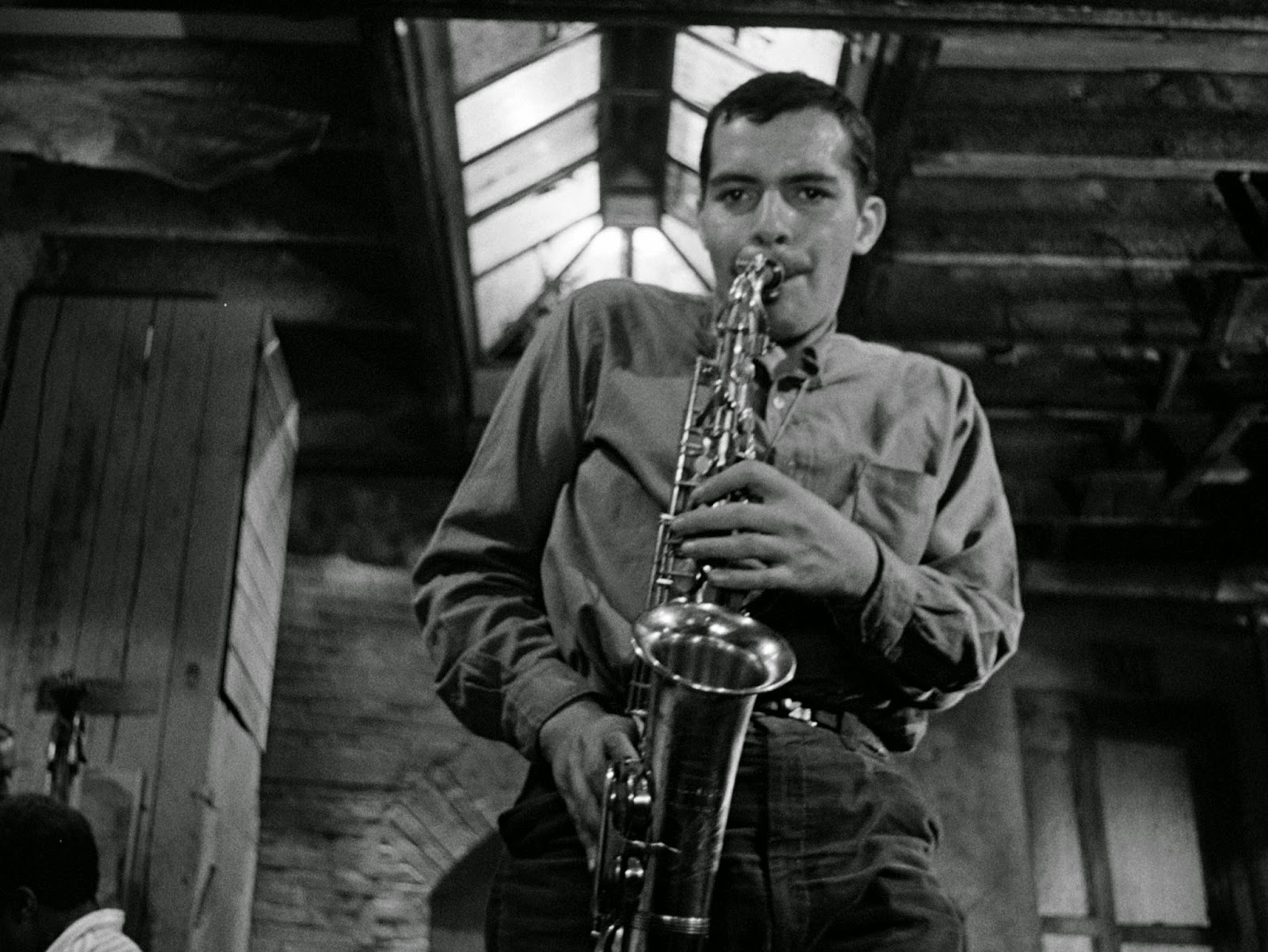 Most of the graphic details of drug use are staged off-screen behind that omnipresent closed bathroom door, but after playing coy for a while, Clarke shows one of the men (Warren Finnerty as Leach) shooting up in exquisite detail. You would think this would be the central sticking point (no pun intended) for critics of the film and perhaps it really was, but when “The Connection” ran into trouble with New York state censors it was ostensibly over the repeated use of the word “shit” as slang for heroin. The film's scheduled May 1962 opening was delayed for months as Clarke and her backers battled the New York Board of Regents. It eventually played in the D.W. Griffith Theatre without being cleared for exhibition and the theater was subsequently shut down and the projectionist arrested.

Eventually the good guys won, but the protracted legal battle had all but sunk the film's theatrical chances, though at least the fight guaranteed that “The Connection” would be a cause célebrè among the cognoscenti. It helped that the very hip Clarke (born into a wealthy family and already a respected New York artist) had powerful “connections” of her own ranging from Allen Ginsberg to Jonas Mekas. “The Connection” was considered one of the major American independent films of the '60s, the first of several for Clarke, but has been largely out of distribution for the past three decades. Because of that, the significance of Clarke's pioneering work has since been overshadowed by some of her peers such as John Cassavetes (who borrowed her film equipment to help make his own debut feature “Shadows”), which explains why Milestone Films has stepped up to the plate to remedy that oversight with their epic Project Shirley.

Project Shirley already yielded the Blu-ray and DVD releases of the extraordinary “Portrait of Jason” (1967) and the jazz documentary “Ornette: Made In America” (1985) late last year. Now this February 2015 release of “The Connection” continues this grand enterprise which will have at least one more volume later this year. (Click the Project Shirley label tab at the bottom of this review to read about the other titles.)

That decaying loft with its little kitchen and mysterious bathroom and its cheap checkerboard table almost seems like it's still there today with the same aging junkies still waiting for Cowboy to help them get through another night. You can certainly understand why Milestone was motivated to make this indie landmark widely available to a new audience. 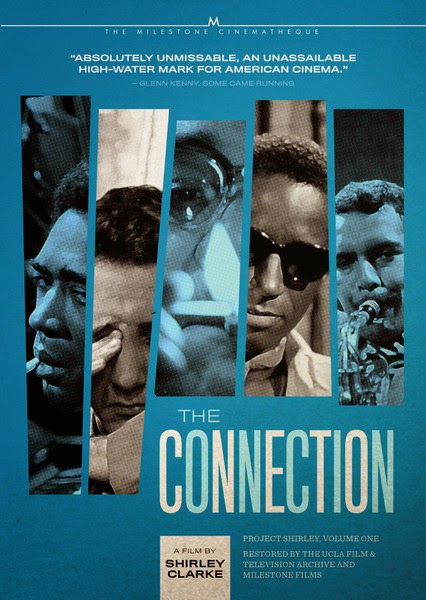 Video:
From Milestone's press release, this film was “preserved by the UCLA Film & Television Archive with funding by The Film Foundation. It was restored from the original 35mm acetate picture and soundtrack negatives and a 35mm composite master positive... In 2012, Milestone contributed the money to create a new preservation 35mm negative.” The collaboration between Milestone and UCLA Film & Television Archive has produced a high-def transfer that is nothing short of astounding in richness and detail. I freeze-framed the movie several times just to walk up close to my TV and scan the image. The grain is thick and beautiful and the image resolution is remarkably sharp; if you want to you can stop and study the detail along the loft's wall, including the writing/graffiti in a few spots. This is an absolutely superb high-def transfer and I cannot imagine anyone has seen the film looking any better since its initial screening... if even then!

Audio:
The linear PCM 2.0 soundtrack is crisp and efficient, occasionally sparkling when needed with some of those marvelous jazz numbers. The dialogue sounds appropriately hollow as if being delivered in the large space we see on-screen. Optional English subtitles support the English audio.

Extras:
Milestone leaves few cinematic stones unturned when curating their releases. “The Connection” is not nearly as packed as Milestone's other release this week, the wonderful “In The Land Of The Head Hunters”, but the supplementary features are both ample and interesting.

The extras start with “The Connection Home Movie” (6 min.), a 16mm collection of on-set footage mostly featuring playwright/screenwriter Jack Gelber and his young son as well as a few shots from the inside of the bathroom that is never glimpsed in the film.

An interview with jazz composer Freddie Redd (27 min.) is absolutely riveting even when he's just bragging about being friends with Charlie Parker because, really, who wouldn't brag about that? He talks about how he got involved first with Gelber's play and then with Clarke's film. What a great interview subject. He deserves his own feature-length documentary.

We also get a shorter conversation with art director Albert Brenner (2014, 5 min.) which has a minor problem with low volume, but it's audible if you just turn up your settings a bit.

The disc also includes a collection of still photos from on-set and behind-the-scenes (6 min.), including several pictures of Shirley Clarke at work as well as a short Trailer (1 min.) and some home footage of actor Carl Lee at the Chelsea Hotel (4 min.) where Shirley Clarke lived. The final extras are audio recordings (2 min. each) of two songs produce for the publicity campaign: “Who Killed Cock Robin?” and “I'm In Love.”

Milestone had originally planned to include a 1959 radio interview with Shirley Clarke (29 min.) - it's even listed on the back of the disc – but left it off at the last minute due to poor sound quality and because it wasn't directly related to the film. They have, however, made the feature available on Vimeo. You can find the link to it at the bottom of Milestone's page for the film if you are interested.

Final Thoughts:
As much as I liked the previous Shirley Clarke films released by Milestone, I was mildly apprehensive about “The Connection” due to my general aversion to filmed theater. I had nothing to worry about. The pseudo-documentary framing device may be a bit old hat by now but is so deftly used here it still somehow seems fresh. The high-def transfer is immaculate too. Highly recommended, of course.
Posted by Christopher Long at 4:56 PM