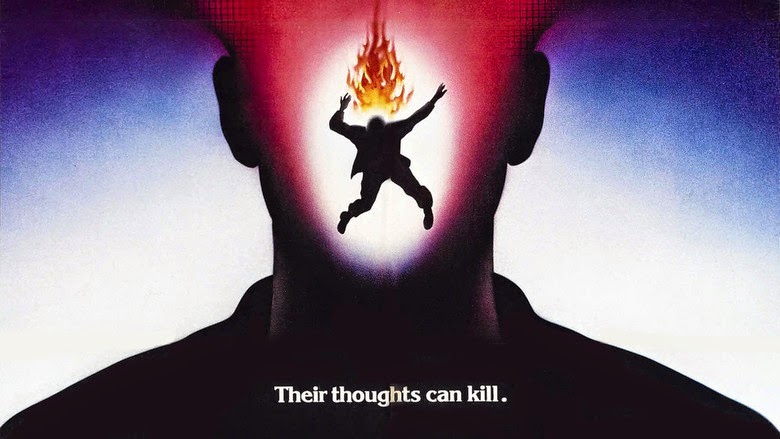 
(In case you know nothing about “Scanners” this review contains significant spoilers.)

I think David Cronenberg's “Scanners” (1981) plays better in memory than in the actual viewing. Reflecting back on the film, vivid recollections of the highlights spring instantly to mind: the gossipy woman in the food court flopping helplessly on the floor, the demonic pleasure on Michael Ironside's face as he telepathically commands a man to blow his brains out and, oh yeah speaking of that, the signature sequence in which a confident psychic's head suddenly explodes like a Gallagher watermelon, no doubt shocking the real-life theater audience even more than it did the horrified gathering of dignitaries in the movie.

Cronenberg always knew how to épater la bourgeoisie, but for all the literal and figurative guts on display in this twisted science-fiction tale, there are also long stretches in which the narrative flounders, the boldest ideas diluted by a standard-issue corporate espionage plot. As Darryl Revok, Ironside is a deliciously malicious villain, but he all but completely disappears for the middle hour of the movie. Leave them wanting more, sure, but Revok's too good (by which I mean too evil) to lurk in the shadows for so long; his inexhaustible army of shotgun-wielding automatons are a poor on-screen substitute for the main man. And while Stephen Lack and Jennifer O'Neill are perfectly convincing as the ostensible heroes, their characters are a bit too vanilla to carry the main action at times.

Perhaps it's ungrateful to complain about a movie with so many memorable scenes when most movies slip from memory before the end credits wrap. Cronenberg is so great at juxtaposing the surreal with the mundane to generate both creeps and (nervous) laughter. In a late scene, just as our leads have become fully enmeshed in a conspiracy involving designer drugs and dramatic mutations, they burst in on a doctor who is supposedly at the heart of it all, only to find him performing a routine physical on an older gentleman stripped down to his boxers: the patient is told to “read a magazine” as the bad guys mass outside.

I guess you want a plot summary. The scanners of the title are telepaths who only sprang into existence thirty or so years before when their pregnant mommies were injected with an experimental drug called Ephemerol. The drug's creator Dr. Paul Ruth (Patrick McGoohan, largely unrecognizable from his prison days as Number Six) feels responsible for his mutant children and enlists the aid of the deeply troubled Cameron Vale (Lack) to combat the rogue scanner Revok who intends either to enlist his fellow freaks to bring down the “normals” or to kill them if they won't cooperate. The rest of the story involves a shadowy corporation whose headquarters are dominated by gigantic reel-to-reel mainframe computers, a double agent, and a melodramatic reveal or two in the final act. 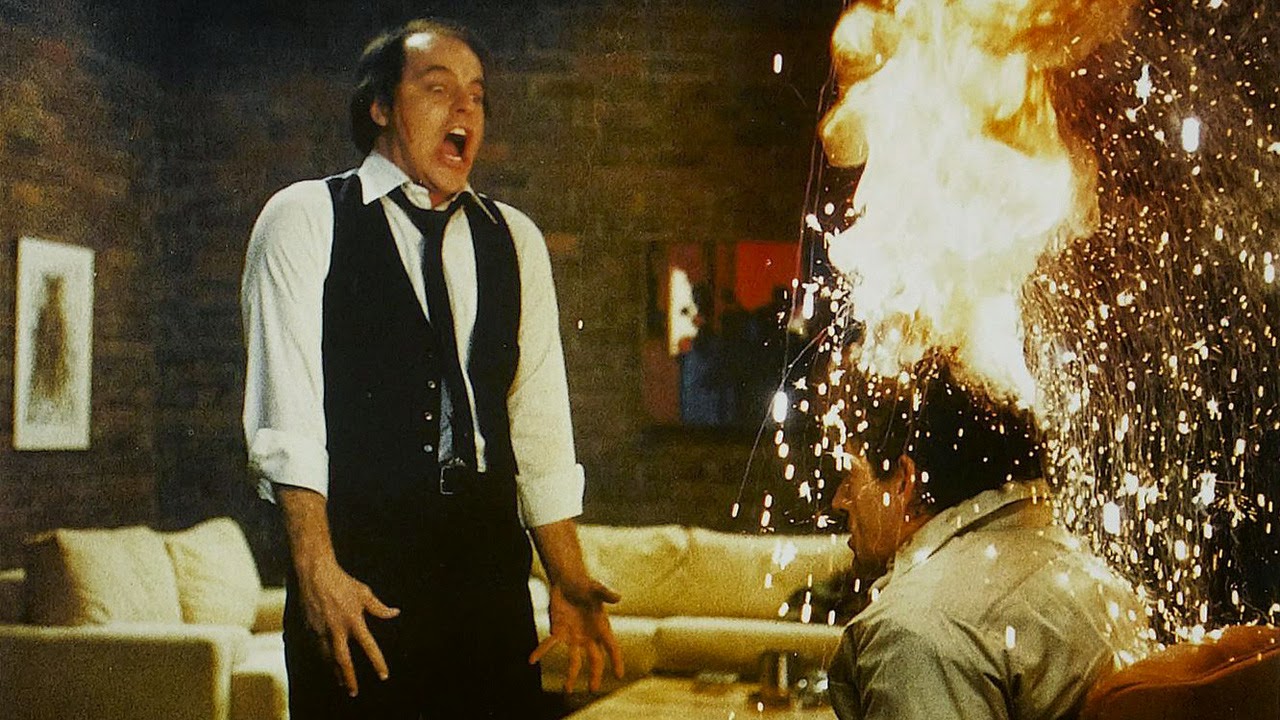 Also lots of blood. Some of it in explosive splatters, some gushing in narrow but powerful spurts. Cronenberg doesn't leave the goriest parts to the viewer's imagination; he means to make you squirm. The film climaxes with Revok and Vale trying to literally blow each other's minds and the stress the telepathic duel places on each of their bodies produces quite a spectacle from exploding eyeballs to burning flesh, all rendered via tremendous practical make-up effects; one can only imagine how tacky and inert the finale would look like in the digital age.

Did I begin on a slightly negative note? When I started this review, I had just seen the movie again. I'm writing this paragraph a few days later and now I'm back to remembering all the groovy stuff and forgetting about the relatively disappointing filler. It would have been amazing to be in a theater full of unsuspecting viewers when Louis Del Grande's head just suddenly blows the hell up 'cause, y'know, damn. “Scanners” has its flaws, but it jolts even the most passive viewer to life now and then, something that's true of all of Cronenberg's best work. You know that scene in “Cosmopolis” where Robert Pattinson is watching that news program and then... yeah, stuff like that. 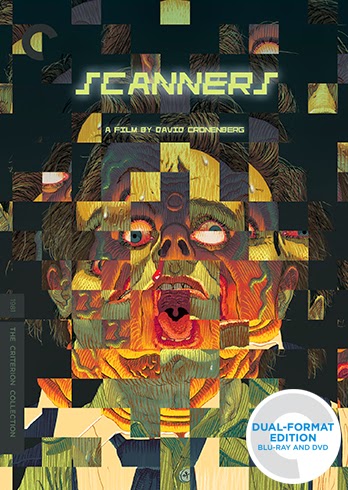 Video:
The film is presented in “the director's preferred aspect ratio of 1.78:1.” From the Criterion booklet, “This new digital transfer was created in 2K resolution... from a 35 mm interpositive.” The image detail isn't quite as sharp as on some of Criterion's 1080p transfers and the contrast and colors seem slightly muted; I'll assume these were all conscious decisions because the toned-down look suits the film very well. Bright colors popping off the screen would distract from the creepy factor. Resolution is strong enough to show plenty of detail both in close-ups and in darker shots. It's a very clean and naturalistic presentation that should please most fans.

This is a dual-format release from Criterion with two DVDs (one with the film, one with most of the extras) and a single Blu-ray. The SD transfer has not been reviewed here.

Audio:
The linear PCM Mono track is crisp and does justice to one of Howard Shore's best soundtracks. Aside from the music, the sound design is relatively flat and straightforward with all dialogue cleanly recorded. Optional English SDH subtitles support the English audio.

Extras:
Criterion has done its usual bangup job of loading this release with extras.

“The Scanners Way” (2014, 23 min.) is directed by Michael Lennick and combines interviews with several crew members to discuss the film's special effects. I won't argue with anyone who says the effects look “dated” as long as they understand that means “much better than crappy, weightless, cartoonish CG effects today.”

We also get a new (2014, 19 min.) interview with actor Michael Ironside who reveals that he was initially just brought in for one short scene but then had his role expanded into the main villain, which probably explains his spotty presence in the story. The disc also includes a 2012 interview (14 min.) with actor Stephen Lack, produced by Subkultur Entertainment.

Criterion also includes excerpts from the Mar 10, 1981 episode of the Canadian talk program “The Bob McLean Show” (11 min.) in which the host interviews Cronenberg fresh on the surprising box office success of Scanners. I'm not sure if the clips (from several of the director's films) originally shown have been replaced here by short trailers or not. Cronenberg discusses how the horror genre picked him rather than the other way around.

Final Thoughts:
The Scanners Way done the Criterion Way. A strong transfer and a generous dose of extras including Cronenberg's debut film “Stereo.” Fans should be delighted.
Posted by Christopher Long at 9:44 PM