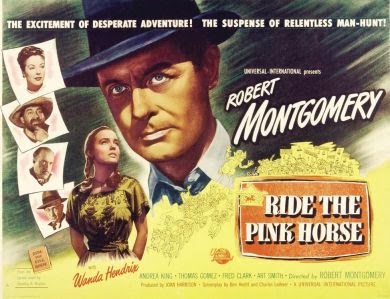 
Robert Montgomery gave us so much.

His greatest gift, of course, was daughter Elizabeth, a creation so perfect she could hardly be plausibly cast as a woman of mere mortals born. Later he served his country with honor, commanding a PT boat in the South Pacific and participating in the Normandy invasion; he was awarded the Bronze Star which surely meant a lot more than one of those silly old Oscars anyway. Upon returning from war, he bravely re-enlisted for a second perilous tour of duty as president of the Screen Actors Guild. Now that took guts.

Alas, Montgomery was no saint, and his involvement in Republican politics led to his testimony as a friendly witness in front of the House Un-American Activities Committee. Too bad Samantha Stevens was not yet old enough to steer him away from this witch hunt; we need her to whip up one of her family's “Reverse The Spell” spells (“lleps eht esreveR” in case you need the incantation) to erase this part of daddy's legacy.

At about the same time, Montgomery decided to share his gifts on the other side of the camera, becoming one of the very few Hollywood actors to turn director in the sound era. His debut “Lady in the Lake” (1947) is semi-infamous today as a noble failure. Montgomery directs and stars as private eye Phillip Marlowe though he's only glimpsed in reflections as the camera is situated from his point-of-view in an attempt to simulate Raymond Chandler's first-person narrative. The nifty gimmick quickly comes to feels stiff and forced, yet it's hard not to admire the film for sticking so assiduously to the experiment.

Montgomery's second directorial turn is somewhat more conventional and substantially less well-known. “Ride the Pink Horse” (1947), adapted from the Dorothy B. Hughes novel of the same name, casts Montgomery as Lucky Gagin, a stiff-necked, meathead thug who arrives in the New Mexico border town of San Pablo. In the first shot after the credits, the crane-mounted camera glides along with Gagin as he disembarks his plain Greyhound bus, walks menacingly into the station, surreptitiously removes a gun from his briefcase, stashes something secret in a locker, and walks back out. Over three minutes without a cut and no dialogue until the very end when Gagin asks for directions to a hotel, an indication that Lucky Gagin is a man of few and simple words and also that hall-of-fame cinematographer Russell Metty serves as an indispensable collaborator on the film.

Gagin's indignant sneer seems to be directed at life in general but he saves his most withering condescension for the New Mexicans who commit the crime of being a little too Mexican. How comes youse dopes don't know how to speak English? There's someone else Gagin dislikes even more though, namely one Frank Hugo (Fred Clark), a shady private “businessman” who messed with one of Gagin's old pals. Even though the town is gearing up for fiesta tomorrow, Gagin isn't here on holiday. He's out for revenge. Unfortunately, even though Hugo's a two-but punk he's got just enough bits in his pocket a wield a little power in this little town, so our hero is really going to be up against it.

For reasons hinting at a grace seldom found in film noir settings, Gagin finds himself with a series of unexpected allies. The avuncular FBI agent Retz (Art Smith) offers Gagin multiple chances to handle things by more official channels. Kindly Pancho (Thomas Gomez) opens his humble home and even the rickety carousel he operates (that's where the titular pink horse is stabled) to Gagin; laughing, gentle Pancho contains such an endless supply of bonhomie it can't help but well out of him and wash over even the gloomiest Gus. Most striking of all is young, skinny Pila (Wanda Hendrix), a waifish, wide-eyed Madonna who is so much of a country bumpkin she is floored by the sight of real ice cubes in her fruit cocktail. She wears through Gagin's rhino-thick skin simply by always being present and patient no matter the abuse he heaps upon her.

Everything about this big palooka suggests that he's doomed to failure, but this seemingly boiler-plate crime tale takes an unexpected turn. The script, co-written by veterans Ben Hecht and Charles Lederer (with an uncredited draft by trailblazing producer Joan Harrison), gradually paints additional layers onto stone-jawed, dull-eyed Gagin. He's just back from the war and is clearly alienated by the fact that a glorious win over an indisputable evil doesn't seem to have done much either for his fortunes or for his homeland. If he didn't expect to be hailed as a conquering hero, at least he would have hoped that crumbums like Hugo couldn't continue to get away with all the things they keep getting away with.

Yet despite all his bitterness and disillusionment, Gagin ever so slowly begins to change as he turns his attention from the crumbums to the decent folk he never quite noticed before. He's too dumb to realize he's being rehabilitated by the kindness of Pila and Pancho and Retz, but is he just barely smart enough to take advantage of the opportunities that arise from their intercession? There's more than a glimmer of hope, but then there are also the grim expectations of genre bearing down upon his broad shoulders. Perhaps it's up to Gagin to decide whether he's worth saving or not. 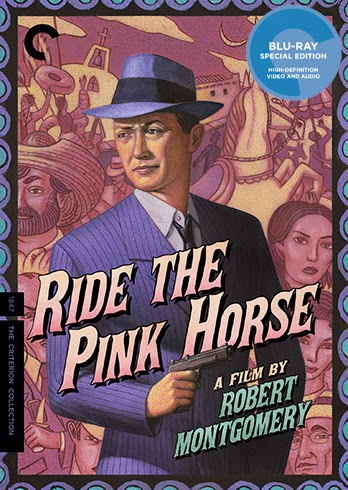 Video:
The film is presented in its original 1.37:1 aspect ratio. According to the Criterion booklet, this “new digital transfer was created in 2K resolution on a Lasergraphics film scanner from a 35 mm nitrate fine-grain and a safety duplicate negative at Metropolis Post in New York.” The transfer isn't quite as grainy as you might hope for a (sort of) noir but the black-and-white contrast is rich and image detail is pretty sharp throughout. This isn't ab absolutely pristine Criterion high-def transfer, but it's very good with little obvious damage from the source material.

Audio:
The linear PCM mono sound track is crisp and efficient. Most music in the film is diegetic and the sound design only gets a real workout during the fiesta celebration. In many scenes the audio is a bit sparer and the clarity of the lossless audio enhances the mood in those scenes. Optional English subtitles support the English audio. Spanish dialogue is not subtitled as Gagin is not supposed to understand it.

Extras:
Criterion probably didn't have a lot of sources to draw on for supplementary material for a relatively obscure film like “Ride The Pink Horse” but they've come up with a few neat extras.

The film is accompanied by a 2014 commentary track by Alain Silver and James Ursini, who literally the book (or three) on film noir. It's a scholarly track that is still quite accessible for all listeners and varied enough in subject matter to maintain interest, ranging from close textual analysis of scenes to more general discussions of genre and the film's production. Very strong as we would expect from Silver and Ursini.

The disc also includes an interview (2014, 20 min.) with Imogen Sara Smith, author of “In Lonely Places: Film Noir Beyond the City.” Smith argues that noir isn't a genre so much as a mood and a combination of themes with an emphasis on character interiority and psychology. Many films noirs take place in urban settings, but she has spent more time studying noirs in rural or suburban areas.

Criterion has also included a Radio Adaptation of the film which aired Dec 8, 1947 on the “Lux Radio Theatre” (59 min.) and stars Montgomery, Hendrix and Gomez.

Final Thoughts:
Whether it's a noir or an anti-noir, Robert Montgomery's second feature film as director is an engrossing study of an unusual crime protagonist. Gorgeous photography by Russell Metty is yet another reason to check this one out.

Posted by Christopher Long at 9:50 PM